Seemingly unable to move on from damaging #MeToo allegations; suggestions of an inappropriate drinking culture; an incomplete UK move to Bishopsgate; and a succession of high-profile departures culminating in Skadden’s poaching of Bruce Embley on the eve of Dawson’s appointment; all have contributed to keeping Freshfields in the press for the wrong reasons.

At the same time, and perhaps most important of all, there is the reputational elephant in the room: namely, the cum-ex scandal in Germany. This involves aggressive tax strategies that were championed by a former Freshfields partner so as to take advantage of apparent loopholes in German dividends tax law. (See ‘Der Freshfields-Skandal‘ for detailed analysis.)

What seems striking to outsiders is that other prominent (and respected) law firm tax departments in Germany – notably Linklaters and Hengeler Mueller – said no to their clients on these trades and refused to sign off legal opinion letters. So it seems that what Freshfields was doing was not common market practice (in other words, it cannot be said that every other law firm was doing the same, which is the usual excuse when a tax ploy proves to have been ill-conceived).

The consequences have been enormous. Firstly, it is estimated that cum-ex claims in Germany amount to €11bn (obviously, not all were signed off by Freshfields). Secondly, the Freshfields partner, along with a more junior colleague (also a partner at Freshfields), has since been arrested and faces criminal prosecution. Thirdly, Freshfields has settled a claim from the aggrieved administrators of Maple Bank (a cum-ex client of the firm that reclaimed €380m in tax that was never paid – and which has since gone bust) for €50m.

The two Freshfields partners involved have resigned. But the concern must be that there are potentially other cum-ex clients who might be minded to bring a claim against the firm, if only because German tax authorities now take such a dim view of such tactics. No doubt Freshfields has sufficient professional indemnity cover to meet claims that might be made, although it’s reasonable to suppose that partners in London (and other non-German locations) might be unhappy at having to make contributions.

Meanwhile reputational damage is already obvious – the German government has distanced itself from Freshfields and made clear it will not instruct the firm (when asked whether firms like Freshfields or others should be excluded from receiving future instructions, the German finance minister replied: ‘I cannot imagine that new assignments will be placed there’ – which is a nice way of saying they will not get any work). Might other EU governments follow its lead?

Similarly, in the corporate sector, German semiconductor manufacturer Infineon (market cap of $30bn) was forced to justify retaining Freshfields as legal counsel after one of its shareholders challenged the firm’s ethical standards. GCs we surveyed for The Legal 500 Deutschland voiced their anxiety about being ‘thrown into the same pot’ by continuing to instruct a firm associated with ethically suspect advice. And with peer firms in Germany already grumbling about the impact of the scandal on recruitment into their tax departments, how can Freshfields hope to safeguard its own longer-term position in the market? 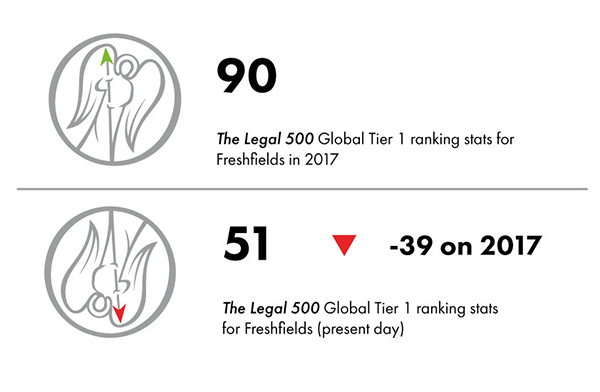 There are indications that this is not a one-year problem, and that there are more deep-seated causes for concern. At The Legal 500 it is noticeable to me that in recent years there has been a sharp decline in the number of Legal 500 top-tier recommendations globally for Freshfields (compare 90 in 2017 and 51 this year). Perhaps that is due to the firm being less open and transparent about its work, but I suspect it runs deeper than that – and it reflects less enthusiastic recommendations from clients and peers, as well as a change in the culture of the firm.

Global law firms build their practices on the basis of global expertise (which Freshfields has in abundance), but also on a global reputation. In effect, global clients want to be associated with the best and they want to be associated with legal brands that enhance their own corporate values. The danger for Freshfields is that cum-ex makes it a target of global activism (for instance, by tax-transparency campaigners in the UK) which might escalate into further bad PR. And that may then lead some major clients to question whether there are other law firm brands that they might prefer to be associated with.

That is the big unknown for Freshfields. With good fortune this will remain a localised (German) crisis. With bad luck it could turn into an international embarrassment.

The future reputation of Freshfields will be decided in the medium to long term. In the short term, I note the firm’s decline in our rankings. I note the negative comments from German GCs. I note some significant departures. I note a culture that seems to be more inward-looking and less transparent than it was a few years go. And I worry that the firm may have become over-aggressive in its pursuit of profits.

Above all else, it is client perceptions that matter. On that basis, if Freshfields was quoted stock, my buy/hold/sell recommendation would be: ‘Sell’.