Staying covered when the tide goes out

Global demographics are changing. In 2009, Europe had more middle class persons than anywhere else on earth. Contemporarily, Asia is home to more middle class persons than Europe. Over the next 15 years the global middle class is set to double, with three billion people entering its ranks. Many of these new consumers will come from emerging markets. As the balance of global trade shifts away from G8 economies, businesses and investors are increasingly looking to diversify into these emerging markets and reap the rewards apparent from growing economies.

The Mint nations of Mexico, Indonesia, Nigeria and Turkey are perhaps the best embodiment of second-generation emerging markets, with favourable demographics and a rising middle class matched by strong geopolitical ties.

The birth of the Mint nations is popularly attributed to Goldman Sachs banker Jim O’Neill, who selected them as the four most promising candidates from a list of countries with high potential to grow rapidly in the 21st century.

However, as emerging markets, the Mints are also inherently exposed to major risks. Two of their number, Turkey and Indonesia, have already been added to a less auspicious group: ‘the fragile five’, a group exposed to high risk of capital outflow from the US Federal Reserve’s proposed stimulus reduction.

The fact that all of the fragile five were Bric and Mint economies shows just how precarious the emerging market business can be. Just a week after the Mint Insight was published, the world watched as an attempted military coup took hold in Turkey, followed by a crackdown on opposition groups and human rights, further highlighting the dangers apparent in such markets. As Warren Buffett once said: ‘it’s only when the tide goes out that you can see who’s been swimming naked.’

In the Mint Insight we speak to some of the leading in-house counsel, investors and market commentators operating in these four markets to find out how lawyers are protecting their companies from the risk of exposure by being effective risk stewards, while also identifying opportunities for growth in rapidly expanding markets. What follows are some individual quotes from the wider report. 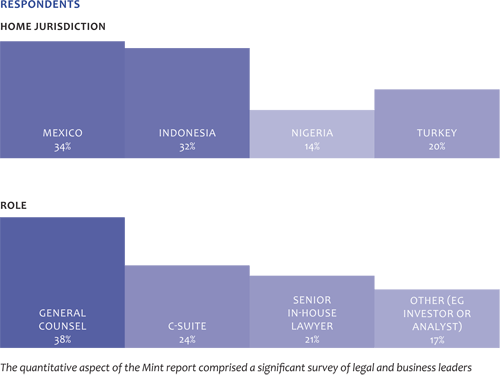 ‘What’s missing in the reforms is sticks, not carrots. Tightening the rule of law, trying to stop corruption, and enforcing property rights are far more important in securing Mexico’s future than anything else. These are things that have more to do with judicial structure and judicial institutions than with big-picture investment reforms.’ – Jonathan Heath, former chief economist for Latin America at HSBC.
Mexico

‘In many emerging economies the legal system is a problem but here it is especially challenging. It is something we need to work on as a country and this is something we need to find a way to resolve so we can restore confidence in the market. Court cases last a very long time and that is very problematic for investors. I personally have cases in my file that have continued for over 40 years.’ – Nazli Dereli Oba, legal coordinator, Karadeniz Holding.
Turkey 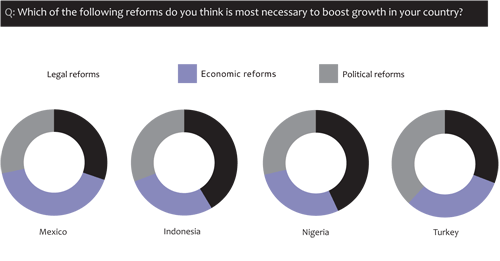 ‘If a foreign company wants to do business with a Nigerian company, the first thing I advise them to do is map its corporate structure and find out what specific responsibilities each person has and how they work with the rest of the company. If that has not been mapped out in detail it may lead to a lot of wasted time communicating with the wrong person and could even pose a challenge to the transaction.’ – Edith Onwuchekwa, general counsel and head of public affairs, Lafarge Africa. 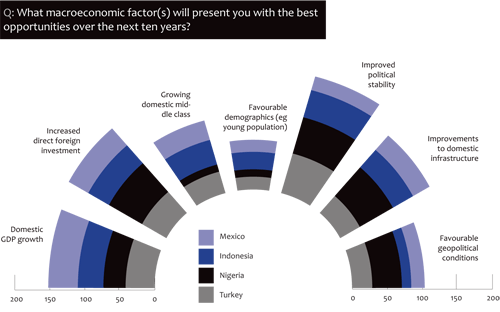 ‘In the last few years the pace of reform and the difficulties we face with regulatory change have multiplied. It can take up a lot of a lawyer’s time keeping on top of it. In the US or UK lawyers tend to think that research is a basic skill which doesn’t add much value to a matter, but when you work in Indonesia you realise that gaining a comprehensive and up-to-date understanding of regulations is always your first challenge.’ – Fitria Disah Djemat, counsel for special project – regulatory compliance at PT Great Eastern Life Indonesia.

The Mint Insight report can be accessed at legal500.com/mint