Infrastructure development has long been neglected in Indonesia – a characteristic that President Joko Widodo (Jokowi) set as a primary goal for his administration to rectify during his term. The World Bank says Indonesia has a $1.5tn infrastructure gap when compared to other emerging economies, with a lack of effective transport corridors across the 17,000 islands cited as a major hindrance to economic development.

After taking office in 2014, Jokowi took advantage of a fall in global oil prices to put a cap on an expensive fuel subsidy the government had been providing, freeing up fiscal resources to inject $15bn into the state infrastructure budget. By 2017, that figure had more than doubled, as the government worked towards fulfilling their slate of ‘national strategic projects’ – 222 major initiatives, 20 of which are complete and 127 of which are under construction.

As with any major infrastructure development, let alone one with the ambition and scale of Jokowi’s, legal are expected to play a major role.

A common issue raised by GCs in attendance was the difficulty in navigating Indonesia’s complex regulatory frameworks. Despite the Jokowi administration’s promises to push through a de-regulation drive in an effort to attract more foreign investment and cut through red tape, regulation was still cited as the biggest barrier to the timely development of infrastructure.

With each sector – roads, energy and so on – all having individual laws and regulatory bodies, along with a lack of cohesion across sectors in terms of procurement processes, difficulty attracting foreign capital has been a direct consequence of the regulatory regimes in place.

One GC from the banking sector noted that regulation, along with a push to make projects outside of Java – Indonesia’s most populous island – the primary destinations for foreign capital, has contributed to a dearth of investment, further inhibiting the growth of rural regions.

Indecisiveness from the government, particularly as it pertains to land acquisition powers, was also a major hindrance. Plans for a China-backed high speed railway between Jakarta and Bandung – a major centre in West Java – have been held up for two years in part because of the complicated (and costly) process of moving large swathes of people in the absence of compulsory acquisition powers. A number of GCs in attendance said that introducing compulsory land acquisition powers would be the single biggest change Jokowi’s government could make to jumpstart real progress.

Despite the clear barriers still in place in Indonesia, collective sentiment on the evening called for optimism – with many looking ahead to the 2019 presidential elections as the next momentous event in the infrastructure development timeline.

To read more about the event or view the photo gallery, visit gcm.ag/jakarta.

If you are interested in attending an event with The Legal 500 in Asia Pacific, please contact Ben Lovell (ben.lovell@legal500.com).

In my view, what you’re seeing at the moment across Southeast Asia is an acknowledgement from governments that there’s been an underspend on infrastructure across the region. 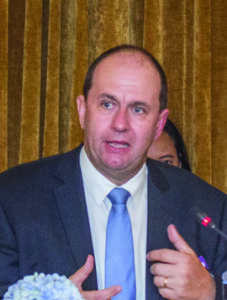 The biggest impediment to progress that I see at the moment is the constant tension between a country wanting to develop infrastructure on its own and the need to attract foreign investment into what is effectively a public-sector type of investment.

That approach is plagued by the issues that have long been common in the region – an insufficient legal framework for investments and the long lead times needed to develop projects. That’s improving, but different countries are at different stages.

What I see at the moment is what has now become a typical cycle for the region: Acknowledgement by government that their own investment and resourcing is insufficient, then subsequently, trying to find the best pathway to attract foreign investment. Then other factors come into play – often politically – which causes things to slow down or be put on hold.

In order to attract investment, what you need to do is reduce the risk on projects. There’s already enough non-legal project risk that sits with developments of these size – but as a government, how far do you go?

There’s the old issue of seeking a guarantee on the project from the government, but that’s not de-risking it from the government’s point of view, only from an investors perspective. And while the primary requirement for a number of these projects is capital, because they don’t have sufficient resourcing to take it on themselves – they also want to take some of the risk off their own books – so finding a happy medium is a major challenge.

So it becomes about really trying to balance these risks and reduce them on both sides. Knowing there is certainty in government decision making is a huge part of this. Using government powers is another: In Indonesia for example, there had historically been a government view that the government would license and greenlight the project, but the developer was then left to acquire the land for the project. That’s a problem. No there’s a recognition that the government is in a far stronger position to acquire the land and can then offer the investor much greater certainty around project timelines and legal certainty.

As legal frameworks for public-private partnerships (PPPs) become more developed, there’s a lot of education taking place around the balancing of risks and how to ensure that this is done in a manner which makes investing attractive, but fair. At its most basic, it becomes an allocation to the party that is best capable of dealing with each risk, taking on that risk. That’s what we look for as legal counsel.

The biggest hurdle remains politics – which is always going to be present in some form or another – but I certainly think that there will be an acceleration of projects around the region in the coming years (although Indonesia’s recent announcement to suspend half of its power program because of foreign currency issues will slow development). Particularly as more major projects are delivered and the benefits of those become apparent to the people, that’s only going to help in progressing down this path further and driving more growth regionally.