Being ranked as the foremost management thinker in the world is not a title that appears to daunt Clayton M. Christensen.

At the age of 62, the Kim B. Clark Professor of Business Administration at the Harvard Business School is widely acknowledged as one of the world’s leading lights in innovation. In both 2011 and 2013 he achieved the top billing on the Thinkers50 chart which compiles the global ranking of management thinkers.

He is loudly applauded for his first book, The Innovator’s Dilemma, published in 1997, which developed the theory that businesses that act in a rational and prudent way, are at risk from aggressive newcomers who do things more cheaply, often with new technology. It is commonly regarded as one of the most important business books ever written.

His theories on innovation argue that that most companies innovate more than customers actually need. By making their products more and more sophisticated and select, Christensen argues that they open the door to ‘disruptive innovators’ who create access to products at the bottom of the market by making them more accessible – either via cost or utility. Famous examples are mobile phones versus fixed line telephones, and personal computers versus mainframe. But because the bottom of the market, with its lower profit margins, is an unattractive place to stay, disruptive innovators often move upwards out of this space, freeing it up for new pretenders to that mantle.

He has been a prolific writer – after The Innovator’s Dilemma came The Innovator’s Solution (2003) in which he sought to teach all companies how they could utilise disruptive innovation. In Seeing What’s Next (2004) he offers companies a three-part practical guide to predicting upcoming changes to their industry. Disrupting Class (2008) is Christensen’s look at reform of the US education system through the lens of his innovation theory, and in The Innovator’s Prescription (2009) he used the same formula to examine the American healthcare system. The Innovator’s DNA (2011) took his theories back to basics and attempted to show how you can essentially build your business on a principle of innovation. In The Innovative University (2011) he applies his theories to the higher education system. His latest book, the co-authored How Will You Measure Your Life: Finding Fulfilment Using Lessons from Some of the World’s Greatest Businesses (2012) was inspired by his annual address to his students. In an unusually personal business book, Christensen and his two co-authors, James Allworth and Karen Dillon, use lesson from business to find the answers to the questions how can I be sure that I’ll find satisfaction in my career? How can I be sure that my personal relationships become enduring sources of happiness? How can I avoid compromising my integrity — and stay out of jail?

It’s not all been plain sailing for the man who co-founded Innosight, a respected consultancy that helps companies grow by using his theories. The book he is most famous for, The Innovator’s Dilemma, was attacked in June 2014 by Harvard historian Jill Lepore. In an article for The New Yorker, she questioned both his scholarship and his vision which led to his central theory, lamenting the fact that it is one which has been followed religiously by many senior executives. The war rages.

This is a man who’s living life to the full. When not formulating influential business theories, over the years he has found the time to play basketball (he’s 6ft 8”), be a missionary for The Church of Jesus Christ of Latter-Day Saints, and learn Korean. 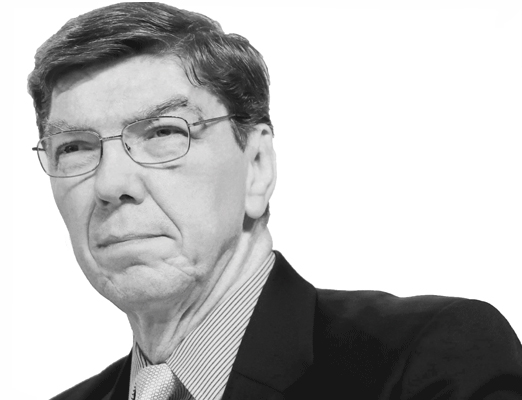