It’s been a turbulent few years for many of those in the upper echelons of Brazilian politics and business. Around the world, headlines have been filled with salacious tales of corruption, perhaps most notably the bribery and kickback scandal emanating from semi-state-owned oil company Petrobras, embroiling many high-profile individuals and entities across the region.

Anti-corruption legislation and regulation enacted in the past five years – the so-called 2014 Clean Company Act, fully implemented in 2015 amid public unrest by the soon-to-be-impeached President Rousseff – has enabled the country to usher in a new era of compliance, the efficacy of which has left many in the business community reeling. The judge-led ‘Lava Jato’ (‘Carwash’) investigation, started in 2014, is perhaps the most recognisable herald of this new era.

Accused of profiting from artificially inflated Petrobras contracts, company executives, along with corporate and political heads, fell one by one over the course of the investigation. Also in the crosshairs is the now-notorious Brazilian-headquartered global engineering and construction conglomerate Odebrecht, where company officials have been accused of paying bribes in exchange for construction contracts across the globe, as well as using illicit funds to finance political campaigns.

In the face of sweeping reforms and high-profile corruption trials, corporations are taking steps to shape up, forced to adapt to the changes demanded.

‘I call it on-the-job training for all the people in Brazil. What’s happening is a mindset change. Every single company now is concerned by compliance, and how we must conduct business in a different way. There’s no going back – it’s a turning point’, they say.

‘The changes are ultimately for the good. It was something which had to happen. Of course, there are impacts on the economy, and whatever affects Brazil affects the global economy – oftentimes in a major way. You see corporations with operations that are suspended, business that is postponed, and people become concerned about doing business with Brazil. But as soon as the hurricane passes, Brazil is going to boom.’

According to Transparency International’s 2016 ‘Corruption Perceptions Index’, Brazil actually ranks among the least corrupt countries in South America. Sitting at 40th place, it appears a full 23 places above the country perceived as the most corrupt, Venezuela. The only independent countries in South America not coloured ominously dark (indicating high levels of corruption) are Chile and Uruguay.

So the continent had ground to make up to begin with. But the effects of scandals like Petrobras and Odebrecht have reached beyond Brazil and across the whole region, putting the spotlight on an increasing number of political and business figures across South America. 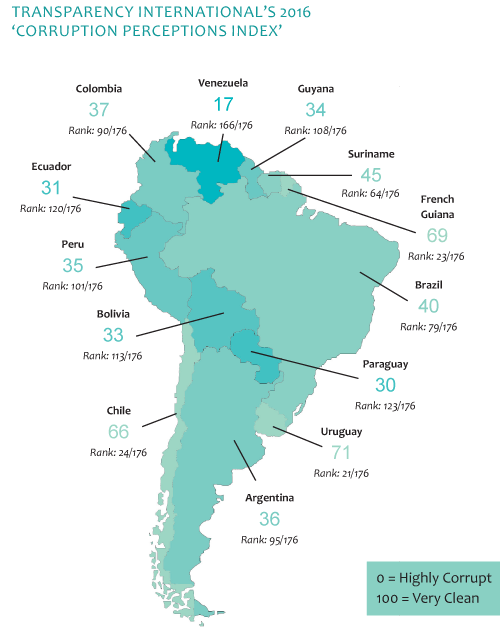 In Colombia, several government officials have become embroiled in the Odebrecht scandal, with even President Juan Manuel Santos called to testify before the country’s Supreme Court.

Corficolombiana, a leading Colombian financial entity, was caught up in the Odebrecht saga, with its former CEO eventually charged with bribery in connection to the Ruta del Sol road project, part of Colombia’s flagship ‘4G’ infrastructure programme. Odebrecht was alleged to have paid bribes to the former Colombian deputy transport minister, implicating Corficolombiana’s José Elías Melo in the process.

‘It was a bomb! It was terrible! It was the worst thing that ever happened to us,’ explains Sharon Diazgranados Peluffo, directora jurídica at Corficolombiana South America.

Odebrecht had these models of operating in every country and unfortunately paid to win that contract – something which we didn’t know about. We’ve been victims as a result of the saga, our company has been damaged by the situation and of course it had a negative impact on our stock.’

As a result of the Ruta del Sol road saga, there have been a number of delays to the financing of further 4G road infrastructure projects in Colombia, with other financial organisations expressing concern about possible implications for future project financings in the area.

‘Issues like Odebrecht, which spread all over the region, have presented a huge risk. Everybody was very nervous – this was something that hadn’t happened before. What’s going to happen with a bank that finances a 4G or infrastructure project in which there is a corruption matter, and subsequently, the road is not built? Who is going to pay the bank? The government needs banks to help in the process of developing infrastructure,’ explains Francisco Baquerizo, general counsel and company secretary of Citibank Colombia.

‘This posed the need for the big banks and the government to sit together and say, “We need to have a clear anti-bribery and corruption framework applicable in situations such as this”. This is happening now, this is something we are working on. We are trying to put together a law that’s going to rule the situation moving forward.’

But there’s no doubt that as well as reducing business risk, a strengthened anti-corruption legislative and regulatory regime across South American countries like Colombia and Brazil places pressure on businesses. For those involved, the strain can even spill over into the private lives of executives not personally involved.

Iconic UK-headquartered engineering business Rolls-Royce faced investigations in the UK, the US and Brazil following the corrupt practices of intermediaries used by the company in a number of overseas markets. In addition to payments in the UK and US, the company reached a Leniency Agreement with the Ministério Público Federal (MPF) in Brazil, and made a payment of $25,579,179, corresponding to net profits made by the company from contracts with Petrobras.

The GC for a multinational infrastructure and engineering firm explains: ‘In terms of reputation, of course, it affects the reputation of any company anywhere. You have this printed all over the news and that has an impact personally. You have neighbours that ask you, “Oh, you work for this company, were you involved in that?”.’

‘Corruption is a “hard red flag” that the legal team has to live with also. You need to scrutinise everything.’

But the main fallout from situations such as these is an increased burden on businesses to make sure their own compliance regime is in order. Rolls-Royce is an example of a company that received praise from the UK’s Serious Fraud Office for its ‘full and extraordinary’ and ‘proactive’ co-operation during the UK portion of the investigation – helping to turn the page on a dark chapter in the company’s history. Its co-operation was also praised and cited by the ‘Lava Jato’ taskforce charged with investigating the Brazilian Petrobras corruption allegations. In addition, the company claims to ‘have implemented an extensive action programme to embed ethics and compliance at our heart and transform our business culture.’

According to several GCs, compliance is easier to reinforce in a multinational corporation, which already has the infrastructure in place, than in a smaller, more local operation.

So what might an effective anti-corruption compliance organisation look like? The consensus amongst the GCs we spoke to was that it should be both top-down and bottom-up. At SAP, there is a central structure, and a local one, explains Luis Fernando Diaz, regional counsel LAC North, based in Colombia.

‘Whenever we see something, we can shoot it off to compliance, they can do an investigation, they can do research, or produce findings for us and come back and say, “We can do this”, or “We cannot.” So we have got a satellite organisation that can help us make the correct decision,’ says Diaz.

‘But corruption is a “hard red flag” that the legal team has to live with also. You need to scrutinise everything, keep your eyes open, tiptoe, and be alert.’

Jorge De Los Rios, general counsel and business integrity officer, Central America and Andean Region at Unilever in Colombia, underlines the importance of compliance on the ground. In Unilever’s case, this means ensuring compliance at each of the company’s numerous consumer goods businesses.

Another key element of a good compliance culture is a supported apparatus for staff to report concerns – and to feel comfortable doing so – such as that described by De Los Rios.

‘Each year, we analyse more than 100 complaints on different compliance matters, from harassment, to conflicts of different sorts. So that gives you an idea of how active our people are in raising the flag whenever there is something suspicious,’ says De Los Rios.

Similarly, SAP has mechanisms for employees to draw attention to corruption and harassment, alongside investigative units and even outside vendors who can be called upon to examine concerns.

As can be seen from examples such as Rolls-Royce however, a robust compliance infrastructure might still not be enough to insulate a company from wrongdoing, and sometimes even the most stringent controls don’t spot corruption on the ground.

‘There are some things that passed every control and no one saw it. No one saw it. And you do due diligence and everything is perfect,’ says Diaz.

‘What you need to develop as a general counsel is something of a sixth sense. It’s gut feeling, also. There’s a lot of it that you can pick up if you develop your instinct on what to ask and what to look for. From my experience, there are just a few cases where you definitely see it crystal clear. But in the majority of cases, stuff can just seem a bit blurry.’

Amid continuing anti-corruption reverberations and activity, what is next for South America? Back in Brazil, arguably the epicentre, for many GCs the outlook for the future is ebullient. One legal director points to a change in the political air ahead of the upcoming 2018 election, and an increased desire among ordinary people to tackle the problems the country has faced.

‘We have a new generation that’s coming, they are younger, they want the change. Just last week I was talking to some friends about it and you see how the population, my friends – they want to make it happen, they want to change it,’ they say.

‘I’m sure that people will now vote consciously. In Brazil, people would vote for anyone. But now people want to understand what the campaign is about, what are the projects that this person is going to bring, so people are more conscious about politics nowadays. The change is coming from the people by the people, which is nothing but positive for our country and its future.’