We began our survey of European GCs and other leading in-house legal figures by posing the question ‘Do you think that the legal team has a role to play in promoting diversity and inclusion in the wider organisation?’ Our respondents – from organisations of all sizes, running the gamut of industry sectors across Europe – overwhelmingly felt that it does, with 71% voting yes.

Those surveyed cited compliance as a driver, but this was deemed of secondary importance to the sense that D&I was a business critical issue and, as such, should be taken up by the legal team as a leadership priority rather than a legal one. The positioning of legal heads within the upper tiers of corporate management, with an attendant responsibility for D&I, was remarked upon again and again. Nevertheless, as one participant pointed out, the legal aspect can play a practical role in enforcing the message of D&I: ‘[in-house lawyers] are more acutely aware of legal cases that hit the headlines, and therefore know the impact, financially and reputationally, of any poor practice.’

Many of our participants viewed themselves as ethical ambassadors, obliged to lead from the front and model diversity as a source of inspiration for other departments – particularly as the in-house teams themselves were often more diverse than the corporations at large. Our responses showed that legal teams had an acute awareness of their own profile, with many participants highlighting the cross-functional reach of the department and resultant ability to influence the broader organisation. As one respondent stated, ‘The legal team has always to be a role model in the company, and is considered as such by all employees. So: “Whatever Legal does – that MUST be right”.’

Do you think that the legal team has a role to play in promoting diversity and inclusion in the wider organisation? 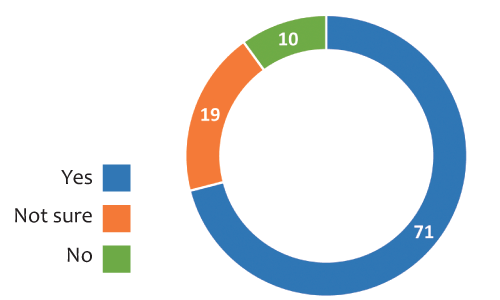 However, 19% of our respondents either disagreed, or were unsure about whether legal teams should promote D&I. Several felt that the subject was better led by the HR team, or individual managers. One respondent felt that ‘to be effective, [D&I] needs to be within the company DNA, rather than “legalised”,’ pointing to a sense among some that the subject should be addressed holistically across the organisation, rather than delegated to a particular department.

Despite a clear sense of shared responsibility for company-wide diversity among those we surveyed, most (82%) told us that there were no specific initiatives or issues that were unique to the legal department – perhaps indicative of a reluctance to be a pioneer and pilot new ideas in this field.

However, our respondents detailed an assortment of diversity programmes on display at their organisations, with varying degrees of perceived effectiveness. By far the most successful in the eyes of those polled was the implementation of flexible working practices – in line with the fact that the greatest number of respondents identified gender as the most important future challenge. 52% of respondents felt that flexibility in the workplace had a great or high impact on diversity and inclusion, which corresponds with the anecdotal evidence provided by our interviewees elsewhere in this report, implying that a rigid culture of presenteeism and fixed attitudes towards working hours can deter women with young families from seeking senior positions.

How effective do you think the following strategies have been in your organisation to promote diversity and inclusion? 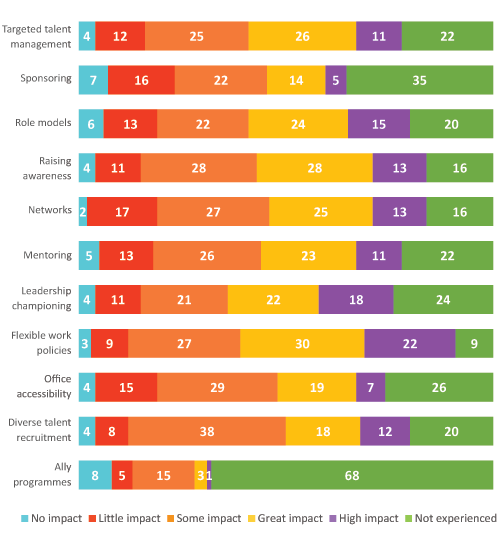 Our survey responses suggest that senior in-house legal counsel set great store by promoting the diversity and inclusion message. Raising awareness (internally and externally) was deemed to be the next most effective D&I strategy, with 41% of participants citing it as having great or high impact. Close behind was leadership championing of D&I, with 40% describing its impact as great or high. In fact, throughout this report we repeatedly hear from diversity consultants and leading GCs who also highlight the importance of tone from the top – and our sample would suggest that organisations are acting accordingly.

A visible commitment to diversity, manifested in high profile diverse members of staff who are actively reaching out and supporting other diverse workers, was also valued by our surveyed professionals. We found that the presence of role models, employee networks and mentoring schemes were considered influential to the success of a company’s D&I efforts. Conversely, a relatively high proportion of participants (35%) had no experience of sponsorship as a D&I strategy, implying that despite a general understanding among leaders that their support is essential to fostering a diverse and inclusive workforce, some are not putting skin in the game and directly endorsing diverse people with high potential.

Is it important when instructing outside counsel to see a tangible commitment to diversity and inclusion? 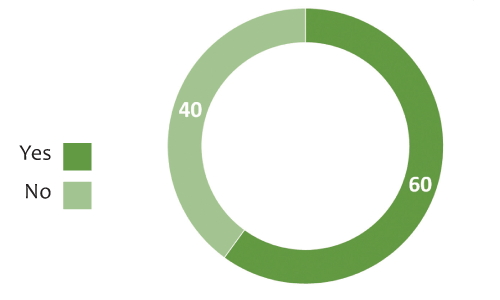 Interestingly, there was a mixed assessment of drives to recruit diverse talent. 38% felt that these were having some impact, but only 30% indicated that they were having high or great impact. Given the fact that some respondents commented that HR was a natural fit for D&I, it appears there is work to be done across organisations to create fertile conditions for the hiring of diverse talent.

The least impactful form of diversity initiative, according to our survey participants, was the ally programme. 68% had not come across such schemes in their organisations, and of those that had, only 4% found them to be greatly or highly impactful. The fact that ally programmes appear to be the least utilised D&I strategy chimes with our finding that LGBTQA was estimated to be the least important future challenge for surveyed organisations.

Whether dedication to diversity and inclusion should extend beyond the company and into the arena of supplier diversity initiatives was somewhat open to debate among our poll respondents, with 60% placing importance on either a diverse team or a tangible commitment to diversity among external counsel, and 40% not. Of those that routinely required diversity information from prospective outside counsel, the information requested was often not especially granular, with only 17% wishing to know about diverse staffing on a matter by matter basis, and the same percentage enquiring about D&I initiatives taking place.

Where is the future challenge for diversity and inclusion within your organisation? 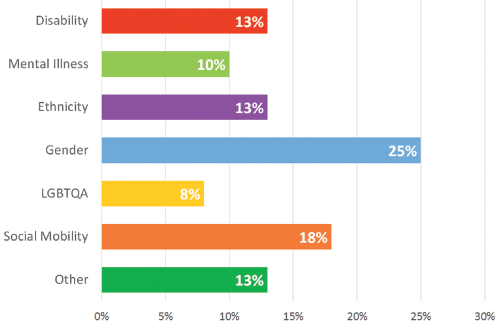 Our sample would suggest that although most in-house leaders are convinced of the need for a robust effort to improve the status quo, and of the importance the legal team can play within this effort, the work must continue to embed focused and rigorous legal function-led initiatives as the norm across Europe.

25% of our respondents highlighted gender as the greatest future challenge, but there was something of a drop between that and the next priority, social mobility, at 18%. Disability and ethnicity followed with an equal share of attention at 13% each, while only 10% of participants highlighted the importance of mental health, and 8% pinpointed LGBTQA as a key issue. Here we find exciting opportunities for leading in-house professionals to reach beyond the issue of gender diversity, and build on their influence and prominence across corporate life, to pioneer equality across all of these areas, and others, in Europe.