When it comes to the implementation of technology for in-house legal departments, getting buy-in from the rest of the business proved to be one of the most influential factors in the likelihood that a team was to have implemented technological solutions within their department.

71% of the in-house counsel surveyed for this report said that they felt their company was supportive of implementing new technology solutions. The remaining 29% did not.

‘Money is nice, but implementing a new bit of technology will require the cooperation of the whole business – from the board down to the IT department. So money is something, but it’s not the only thing,’ explains one general counsel from the utilities sector.

Is your company supportive of implementing new technology solutions? 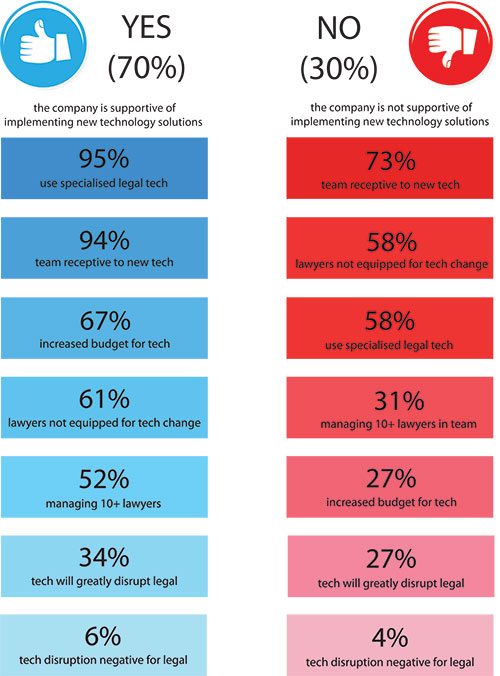 Those who did feel that their businesses supported them were empowered to actually implement legal technology into their departments: 95% reported that they had used specialised legal technology within their department, compared to just 58% of those who did not receive the same support. They also tended to be from larger teams, with over half being responsible for teams numbering ten or more.

Despite being a predictor for the level of technology use within departments, comparing those who felt their organisation was supportive of the implementation of new technology with those who did not unveiled some interesting insights.

Those who were well supported in the implementation of legal technology (and therefore more likely to have actually done so) were, on the whole, less cynical about technology: just 34% felt that it would greatly disrupt the legal profession in the next five years. At the same time, 39% thought that today’s lawyers were adequately equipped to deal with technological disruption within their profession.

Compare this to those who were not well supported, where 42% were as positive on the question of current lawyers’ preparedness. Just 27% felt that technology would greatly disrupt the legal profession in the next five years.

6% of those who said they did feel that their organisation was supportive of implementing new technology said that they felt that technological disruption would be a negative for the legal industry, compared to 4% of those who did not feel supported.

This may have as much to do with the composition of those groups as anything. Counsel whose businesses did not feel supported tended to be from larger companies in more traditional sectors. 80% of those that felt their businesses did not support them belonged to businesses with annual revenues of at least £1bn, and 31% were responsible for a team of more than 10 lawyers. Over half were from companies involved in financial services – the likes of banking, insurance and audit.

‘With a smaller team, you tend to be more agile in your budget choices,’ says one general counsel in the fintech sector. ‘Also, with a smaller headcount, the actual investment you’re asking for from the business is likely to be much less than if a multinational bank was to look to adopt a global legal tech solution.’