Pinsent Masons, DLA Piper, Ashurst and Bird & Bird have all missed out on William Hill’s latest UK adviser panel, with Linklaters and Addleshaw Goddard the only firms to retain their places on the FTSE 250 bookmaker’s slimmed-down roster. (August 2017, legalbusiness.co.uk)

HSBC has appointed around ten firms to its UK legal banking panel. Addleshaw Goddard, Eversheds Sutherland and Simmons & Simmons were among those which made the cut.

CMS Cameron McKenna, Dentons and Pinsent Masons are also among the roster which was reduced in size. (July 2017, legalbusiness.co.uk)

Spanish banking giant Santander has appointed a host of firms including Slaughter and May, Ashurst and Reed Smith to its UK legal panel for three years. (July 2017, legalbusiness.co.uk)

To read more about the data behind the story, click to enlarge the PDF below, or visit legalbusiness.co.uk 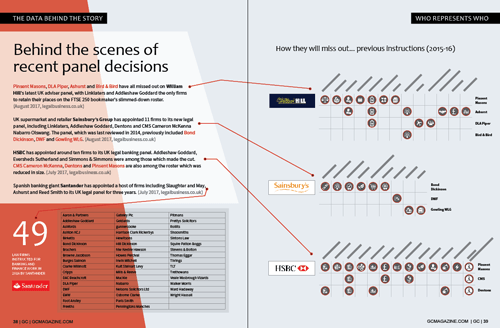