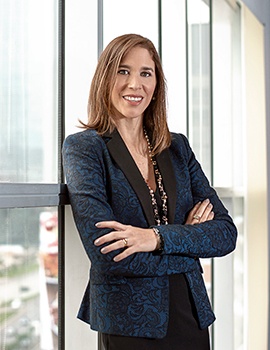 When I joined Sodexo 11 years ago, diversity and inclusion was part of the DNA of the company even then, but not in the same way that we work now. Ten years ago, these topics weren’t part of the board of directors or the leaders of the company. Nowadays, I think it’s not acceptable if a company doesn’t take the time to discuss these topics at board level. It’s not about one specific sector or business – the market in Peru needs to talk about diversity and inclusion.

At Sodexo, we started setting D&I KPIs in 2015 – I remember the first time I asked for the number of women in the company, and we had 25%. We started working. We developed our local diversity and inclusion policy because we had a worldwide one, but we wanted to work on this topic in Peru. After six years of working and understanding the real problems of D&I, we have reached 40% women in the company. If I told you that we had improved the number of women from one year to another that’s easy – you just hire more women and that’s it. But if we see this change over six years, it’s because the culture has changed. It’s a statement by the company about how we want to be seen and how the talent sees us from the outside, especially considering we work a lot with the mining sector in Peru, where the average number of women in mining is very low, around 6%.

People need to be included; it’s not only about diversity. Peru is one of the most diverse countries in the world and that doesn’t make us necessarily inclusive. I think this is part of our challenge. It’s not enough to say, ‘I respect and hire people regardless of age, sexual orientation, gender or whatever’. It’s about taking action, making a commitment and changing the policies in order to guarantee the conditions that we are offering to our people.

Part of our commitment to diversity, equity and inclusion is to promote and foster a culture of equal opportunities, to provide inclusive workplaces everywhere we operate. It’s part of our strategy, it’s part of our core business. So, we have created policies about diversity and inclusion, and we have adjusted our policies to be fair and to guarantee that everyone, regardless of gender, orientation, disabilities, religion, whatever, all have the same rights and can hold any position in the company. Because sometimes you don’t say it, and when you don’t say it, people don’t believe it, or don’t think that it’s possible.

In 2018, Sodexo Group launched a gender balance study with McKinsey, as one of their business cases about gender equality. We share that report with our clients and providers and invite all our stakeholders to work with us and make some activism around gender equality.

According to Peruvian statistics, seven out of ten women have suffered physical or psychological violence. It’s all around. So we said, ok, we are 40% women, but we have 60% men, so we have an opportunity to talk about gender violence, not only for women – because women along can’t make the change – but also in men. We started talking about the importance of shared roles in the house, and to try to reduce or eliminate all the unconscious bias regarding, for example, positions ‘for’ women or man, like HR for women, IT for men.

We started using blank résumés in hiring, in which the user has only the information that is needed to take a decision about the position, with no name, gender, age or photo. Because, for example, if someone is hiring for a maintenance professional, the supervisor might think of 35-year-old man, and if they are presented with a 40-year-old woman, they might think they don’t fit the position. We have seen the effect of this, how people started hiring people that they did not expect: ‘Oh, I didn’t know that they were a woman!’ or ‘I didn’t know that he was a man!’ In that moment, you know you really have hired talent and not what your unconscious bias is telling you. We also started empowering women, showing success stories of women in positions that were traditionally thought of as ‘for men’, for example successful women engineers.

In Spanish, we have a lot of words that are gender-based, for example, ‘profesor’ and ‘profesora’, which is the same word for different genders. I’m a lawyer, and when I see a job advertisement that says ‘avogado’, I assume that I can apply. But if a man saw an advertisement for an ‘avogada’, they are not going to apply. So we developed an inclusive guide for language, and that way we avoid talking only to the 50% of the population that are men. We distributed the guide to all our people, so now we talk inclusively, to all genders.

We created unconscious bias workshops for people involved in HR and talent attraction, because if the people on the front line receiving a résumé have something against women or are uncomfortable with people of a certain region or whatever, they are not going to pass the résumé on to the company. So, we work a lot with people selecting talent to talk about unconscious bias to help us to have a better process for all people.

In the legal department, we review all the policies. For example, we know that our policies regarding salary sit within a framework, a scale or a band. But do the policies talk about pregnancy, for example? Because I can be in the correct band where there are no differences between women and men and the bonus is the same for each gender. But what happens if I go on maternity leave, and I don’t have the opportunity to complete the time period I need to obtain my bonus? It’s not written. And if it’s not written, it depends on the manager. As a legal team, our mission is to protect and to write those things down, because when the policy is not clear, that’s when the difference starts. We include those topics in our policies and in our communications, to raise awareness throughout the company.

In terms of D&I (and also ethics), people don’t expect companies just to comply with the law. That’s basic. People expect you to go further. You have law, you have regulation, it’s obvious that you can’t go against those, but we can improve, especially in countries in Latin America that are very far away from how things should be. So, for us, it’s important to give more attention to D&I in order to improve equality for our people. I can’t say, ‘There are no LGBT rights here in Peru so I do nothing for that community in my company.’ It’s not right. And that’s the power we have as private sector companies. We don’t want to go against the policy, but we can do better. We can’t go against the law, but we can definitely do better. I think we have a commitment with our people, with our stakeholders, and also with our society.

As a legal department, we work with the supply chain department on how we can set minimum requirements for some D&I aspects so that even small entrepreneurs can be part of our provider program – because we cannot ask the same conditions for a big, big company to a small one. 40% of our suppliers are small entrepreneurs, and 40% of those are led by women. So that’s also a way to drive and foster a D&I culture with our stakeholders.

Legal has also implemented a compliance program, and we have a hotline to report any situation that could be considered a failure in our D&I program. We listen to all reports, and we have an ethics committee that resolves them according to our policies. We also give training sessions about sexual harassment law to all our employees. We include clauses regarding human rights and diversity and inclusion in our contracts with our clients and our providers as part of our commitment to D&I with our stakeholders.

As a legal department, we search for the real equity inside the company. We are the guardians of all the policies, and how to make them live, so when we review them and align them with the diversity and inclusion program, we are making changes in the company. It’s easy to talk about diversity and inclusion but have policies that are not aligned with our speech and how we work. But we can guarantee that all the things we state are part of our conduct and ethics code. It’s important because it’s the governance, the institutionality that we need to include in our companies, because if it’s not written, if it’s not in a document approved by the company, it’s just something we said and that’s it. I think we guarantee that diversity and inclusion is not only spread among all our employees, but also can be respected as part of the DNA of the company.