Everything is up for grabs at Teva Pharmaceutical Industries – well, certainly from an external law firm perspective. The Israeli-based company – the largest manufacturer of generic drugs globally – recently announced that all existing law firm relationships were under review, with a view to reducing the number of law firms used and to cut costs. While conceptually, that may not seem like anything groundbreaking in and of itself, Teva has taken things further than usual – going as far as warning existing firms that it is more than conceivable that they won’t continue to be instructed.

‘Revenue growth at Teva is flat. Law firms’ rates are going up. We have to do something different – that is it in a nutshell,’ explains David Stark, chief legal officer at Teva Pharmaceutical Industries. ‘We took a run at this five years or so ago. Things were hectic back then, and there wasn’t really the ato do it, and it was incredibly time intensive.’

The company’s well-documented cuts took place from late 2017, and the legal team was instructed to align legal spend with the wider business. A year ago, in mid-2018, the process of reducing outside counsel spend began.

‘The company had been in an acquisition phase leading up to this, and when you acquire companies, you acquire law firms.’ When pressed on how many law firms Teva uses, Stark admits it is many hundreds (our own research at The Legal 500 suggests around 700 in total). ‘The ultimate goal would be to use just one, but in the short term, that is just unrealistic. But we can make a significant reduction, even by 50% in year one.’

The process began with Teva writing to all of its outside counsel, informing them of the company’s review process and the reasons underpinning the exercise. 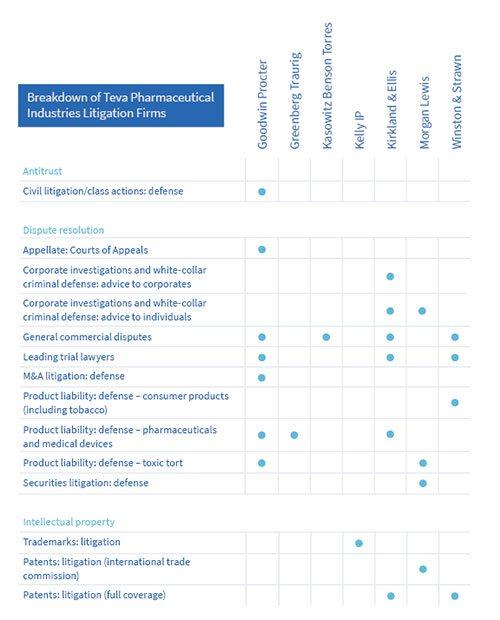 ‘We wanted to have transparency, we wanted the firms to know what we were doing,’ says Stark. ‘With some firms, we have very strong relationships. It’s no comment on our current firms, but we aren’t going to move work around for the sake of it. It’s got to be a compelling reason, at a similar or lower cost. Firms that we are currently working with should see this as an opportunity.’

Knowing law firms as we do, this must have come as something of a shock – so how did they react?

‘A mixed bag, to be honest. Firms that are doing a lot of work for us, to be honest, don’t like it. They see it as a big ask, to effectively go through the pitch process again,’ says Stark. ‘Firms that do a little bit of work for us are the ones that are really excited. And firms that we don’t know at all, that we have invited in to tender, are not sure what to make of it.’

But Stark says that the firms that succeed as a result of the lean process will have bigger scope within Teva.

‘We are looking to have fewer people interacting with law firms, but there have to be smarter approaches. Yesterday I was in the office with a senior lawyer at one of our firms, and what he wanted to talk about was rate increases!’

Higher rates seem to be more of the norm at the moment, partly because many clients are letting them get away with it.

‘The economy is on fire, and top firms gravitate to easier clients. We may not be able to afford some firms, so we have to choose our set of firms very carefully. Firms we instruct need to have flexibility and be rate competitive,’ says Stark.

‘At present we have more high-end legal work, so why fool around with low rates? But a lot of that work is coming to an end. From here on, it will be slow but steady progress. It won’t be less money, more work, but instead more certainty around a broader bucket of work for the preferred firms.’

Stark is being deliberately cautious about the amount of external spend that Teva is currently making. While he coyly admits that it is ‘more than $100m’, our own research team has been digging deeper into this. Looking at the firms and types of work that is typically done, we estimate that the actual number will be over three times that, at around $330m. Some firms are estimated to be in eight figures for their fees, so there is a lot at stake for partners if they lost that work.

‘There will be benefits for the company,’ says Stark. ‘We will get some savings. But there are definitely going to be some surprises in store, and there will definitely be some lessons learned.’

Under the Smarter Law led-system, firms that submit to the process are assessed on pricing and other data metrics and, following a period of research and interviews, a far reduced panel of firms will be announced by the end of the year. Just what that process entails is detailed in Faure’s new book, Smarter Law: transforming busy lawyers into business leaders.

I often find myself looking at theoretical books that might have some practical application in the field of law, but this book is based on the experiences of over 200 in-house case studies. What the book allows GCs to do is dip in and out of the experiences of their peers and cherry pick the techniques and applications that will work for their in-house departments. To find out how the kinds of techniques that Teva are using currently, the ‘Win: Win: Win RFP Process’ chapter is a must read. It explains how a tender process allowed a client to pay law firm bidders more than their proposals and still reduce spend by 44%.

In recent months, we have seen a growing movement back to simplicity, from the #bringbackboring campaign, to the simple mantra of ‘people, process, delivery’. The Smarter Law approach isn’t based on the future of law, it is firmly rooted in the here and now. What GCs can do right now to improve efficiencies, working practices and transform the function. The best learning comes from who have done it before. Don’t take my word for it, get a copy and delve into it yourself – you will benefit and you will learn. Available from: gcm.ag/smarter_law.