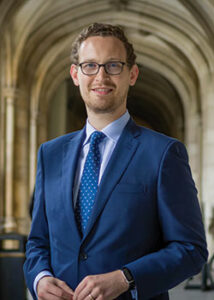 Many were surprised when Darren Jones was elected Labour MP for Bristol North West – none more so than Jones himself. Except for, perhaps, his boss at BT Legal.

After two unsuccessful electoral gambits in 2010 and 2015, the 30-year-old newlywed was all set to give the next election a miss and focus on his considerable workload as in-house counsel for BT Consumer, and had assured his managers as much.

But the lure of the 2017 snap general election, a short campaign, and the opportunity to voice some passionately held anti-Brexit views were too strong. He took advantage of an arcane company policy that allows BT employees to take a month off on full pay in order to run for Parliament, and hopped on the campaign trail.

Bristol North West had mirrored the national election results for over 40 years and, given the dire initial showing for Labour in the polls, 2017 looked certain to be a Conservative win. But Jones stormed to victory with a majority of nearly 5,000 votes, bucking the bellwether trend.

‘So then I had to tell the guys at BT that my informed wisdom about not having to worry and me coming back in four weeks’ time was completely wrong – and I couldn’t work my notice period because I was summoned to Parliament on Monday,’ he recalls.

Luckily they were supportive. And it was a dream come true for this working class Bristol local. A long-time political advocate, he fought his first campaign while still at school – an attempt (sadly doomed) to prevent the closure of his sixth form college.

Jones came to professional politics via a circuitous route. His first ambition was to become a doctor, and he studied Human Bioscience at Plymouth, before getting side-tracked by party politics at university. But after a tenure as president of his Students’ Union, Jones elected not to go to medical school, nor to follow the route of a career politician, instead training as a lawyer.

‘I didn’t really know anybody in the law, there were no lawyers in my family, I hadn’t known anybody who had gone to law school, and my view of the law was what you saw on TV – l largely thought of it as being a bit stuffy and boring,’ he says.

But after being intrigued by meeting with Bond Pearce (now Womble Bond Dickinson) partners, and taking up a training contract at that firm, he found he loved the legal life. Following a spell in private practice, he went in-house at BT’s consumer law division, where his role comprised a mix of contracts, risk management, portfolio terms and conditions, lobbying and regulatory matters – including advising on implementing the General Data Protection Regulation (GDPR).

Jones isn’t the first lawyer to enter the House of Commons, and he agrees that legal, constitutional and business knowhow are of great use to a new MP. But he is quick to make the point that while lawyers are adept at making law, it’s equally important to have a breadth of skillsets in Parliament. And, he says, the lawyerly love of detail could prove to be a frustration, particularly when getting to grips with the extraordinarily complex legislative task of transposing EU law into UK law.

‘It is probably going to drive me bonkers, because I’m going to be asked to vote on things where I’m like, “I don’t think we’ve actually scrutinised it properly enough”,’ he explains.

Having campaigned on an anti-Brexit platform, the issue is never far from Jones’s mind and he is frank about his views on this ‘enormous iceberg’.

‘I intend to do everything that I can to remind everyone that we can change our mind about Brexit. That is a huge task, but I think it can be done. And failing that, at the very least, we must stay in the Single Market and the Customs Union,’ he says.

While lawyers are adept at making law, it’s equally important to have a breadth of skillsets in Parliament

‘There’s not enough parliamentary time to get all of the Brexit Bills and the trade deal done in time, along with trying to run the country and everything else we need to do. It just seems to me there’s not enough time to do the job properly, given the quantity and significance of what it is that’s before us.’

For these reasons – and cognisant of his fragile majority – Jones has dived straight in. He’s on the board of UK Legal Futures, a group of around 500 lawyers that briefs parliamentarians and civil servants on Brexit-related legal issues, and sits on the EU Scrutiny Select Committee, which examines all EU-derived communications and law affecting the UK Government. Apart from Brexit, he also sits on the Science and Technology Select Committee and is setting up a parliamentary commission on technology ethics – Jones is fascinated by automation, robotics and the ‘fourth industrial revolution’, particularly building skills to fit future jobs and avoid mass unemployment, but also working to reduce cyber risk as cities become smarter.

Technology issues are not new to Jones, of course. His background as an in-house lawyer at telecoms giant BT brings an understanding of telecoms, broadcasting, innovation, startups and consumer law, all of which impact the daily lives of both members of the public and businesses. ‘When MPs talk about fibre rollout, speeds, or automatic compensation [for poor communications services], I really have an in-depth knowledge of the industry,’ he says.

Day to day, Jones plans to employ a lawyer’s approach to solving constituency problems, because he believes this adds value. ‘I expect my office to be serving my constituents in the same way that I would expect a law firm to service their clients – so you want responsiveness, keeping them informed, being very clear on what the outcomes are and how you can help them, and maybe using legal insight as well as normal casework routes to try and help resolve problems,’ he explains.

He would be wise to keep his legal powers sharp, because Jones is clear that after his political career is over – whenever that may be – he will return to the law, and probably in-house. To that end, he’s signed up as a legal consultant with Kemp Little to keep his training and legal skills up to date during parliamentary recesses.

‘Politics is a contribution and law is my career,’ he says. ‘I think MPs would do much better if they thought they were here for a limited time on behalf of their constituents and the country, as opposed to being here for life.’

‘Increasingly, especially in regulated businesses, it’s not just about contracts and doing deals anymore, it’s about managing legal, regulatory and increasingly ethical risk as well. My sense is that I’ll be able to bring a unique experience to understanding how businesses should lead on that legal, regulatory and compliance ethical risk space and how that adds value to brands, profit and customers’.