When the global financial crisis struck in 2008, the impact reverberated far beyond the traditional financial centres of the west. Initial speculation was that Asia would be relatively well insulated from the crisis due to the growing financial independence of the region. But instead, the effects hit at a speed and depth that surpassed all expectations. Under fire, financial institutions sought to reduce their exposure to the region, resulting in a steep decline in the value of currency and equity markets, at a time when the price and volume of exports was plummeting.

The accelerated impact of the crisis gave way to an equally brisk recovery, bolstered in no small part by strong domestic demand in China and Indonesia preventing both economies from falling into recession. But while sophisticated financial centres were swift in their regulatory response to the crisis, particularly where reform to over-the-counter financial products and transparency were concerned, much of Asia has largely lagged behind.

‘At present, we are trying to implement a lot of changes to laws and regulations, which are consequences from the global financial crisis, and are still being introduced – legislation around transparency, product disclosures and money laundering. In places like the UK, Europe and the US, much of this has already been introduced, but it’s been somewhat slower to come about in most of Asia,’ explains Anjali Mohan, head of legal and compliance at Sumitomo Mitsui Banking Corp Singapore.

Adding to the regulatory push across the region have been a substantial number of conduct-related scandals, most notably the ongoing 1Malaysia Development Berhad (1MDB) investigation. In that case, the Prime Minister of Malaysia, Najib Tun Razak, as well as a number of his associates, stand accused of misappropriating funds with as much as $3.5bn estimated to have been stolen from 1MDB, nearly $700m of which is reported to have ended up in bank accounts controlled by Razak. As that investigation continues, as part of a multi-jurisdictional and agency effort, local regulators are ramping up enforcement in an attempt to mitigate the chances of a similar scandal erupting – an effect already being felt by general counsels.

‘Anti-money-laundering regulations are going to be a significant concern for the foreseeable future. There has been far more of a focus on it in Malaysia following the 1MDB scandal. In [the regulators’] view, the processes aren’t tight enough and there has been real attention paid to this across the region,’ says one banking general counsel from Malaysia.

‘As well as in Malaysia, this has been seen occurring in places where significant sums of capital are held, like Hong Kong and Singapore. This is part of the reason that compliance is being invested in, despite it being more common for in-house teams at banks to be downsizing at present. The implications of not complying with anti-money-laundering and Know Your Client regulations have the potential to be devastating for any bank, because the penalties can be so huge and can have an effect on your licensing.’

The step up in enforcement in the more sophisticated financial centres across the region has sent a clear message to financial institutions. But a lack of both regulatory harmonisation and approaches to enforcement in other countries has highlighted the disconnect across the region, despite a marked effort from regulators to raise their standards.

‘Different jurisdictions have different standards. Depending on which country, some will be on the same level as a highly-developed regulatory regime like Singapore, but in others we’re at least seeing the same pace of change to bring their regulations up to that level. A number still are a long way behind, but the level of financial market development at this time means that those standards aren’t yet necessary, because the type of products being offered and their sophistication aren’t on par with somewhere like Singapore or Australia,’ says Mohan.

‘There is a significant growth opportunity apparent, because private wealth is still increasing across Asia. Growth figures in some countries sit in the low double digits, where masses have not only come out of poverty, but have progressed beyond the middle class.

New millionaires are being made every week, and new billionaires every month – there’s nowhere else in the world seeing such staggering growth. To complement the significant growth markets, you have very strong and mature markets in places like Singapore, Hong Kong and Japan.

We are looking towards a significant wealth transfer across generations in the near future, because it’s still primarily first-generation wealth in many of these jurisdictions. That makes for a very interesting time for the wealth management industry, as we’ll be looking not just at creating investment solutions, but advising clients how to govern their families and transfer wealth to future generations.

We’re operating at a time where there is significant margin pressure, which can be attributed to a number of factors. The disappearance of asymmetries of information is significant, which wealth managers have been able to exploit in the past, but now the internet has eroded much of that away.

An increase in transparency and disclosure requirements has added to this pressure, as whenever you create transparency around products and pricing, competition increases while margins go down. What this means is that it’s increasingly difficult, and will eventually become impossible, to make money on a transactional or commission basis.

With the rise in automation, there’s a need to develop business models away from this type of income, in favour of one where you are being paid for services like advice and portfolio construction. You still try to provide your clients with access to attractive and alternative investments, which can leverage your economies of scale as a provider, but the core services being offered will change.

There are, in my view, three areas in which wealth managers can maintain meaningful revenue streams in times of negative or low interest rates, high margin pressure and where providing access to standard investment products no longer attracts clients:

One, you sell your advice, construe portfolios that track with precision and reliably specific risk-reward profiles desired by clients – an area which is going to be increasingly underpinned with technology.

Two, you give clients better access to alternative investments, such as hedge funds and private equity deals. Having the right client base and distribution power will be important here.

Three, you develop your offering beyond investments to include the total wealth needs of your clients. This can include areas such wealth transfer, wealth and family governance, and philanthropy.’

US$152.5m Average net worth of an UHNWI in Asia Pacific

‘In some respects, less developed markets can be less challenging, because the market and products offered are relatively straightforward. On the other hand, because the regulations can be very general and how they are enforced can be unclear, it can be very challenging in terms of meeting the expectations of the regulator.’

The lack of detail and historically inconsistent enforcement of regulations in these jurisdictions has created a sector where legislative grey areas are rife – which can be interpreted by major institutions as either an opportunity to get creative, or a pitfall.

‘In countries where a grey area exists, it poses a lot of challenges to international organisations, who will have clear standards and operating procedures,’ says Christoph Kurth, former general counsel for wealth management APAC at UBS in Singapore.

‘These organisations are used to operating in mature locations, which can cause disagreement between local entities on the ground and central management about just how you operate in grey areas. That really puts the onus on having sound judgement locally so you can make those decisions.’

In a number of jurisdictions, the emergence of grey areas was a result of regulatory bodies racing to catch up with the increasing sophistication of both the financial products available and the behaviour of investors within those markets. This typically followed periods of sustained, heavy growth, regardless of whether that was a result of internal or external developments – or in the case of China and a number of other markets, a combination of the two.

‘China can be a challenging market because there are a lot of uncertainties caused by the relevant framework being less developed than in other jurisdictions, which is purely because it’s a relatively new industry over which the government wants to keep tight control. The regulatory infrastructure is certainly developing but, as we have seen, the market still behaves slightly unusually on occasion,’ says Kurth. 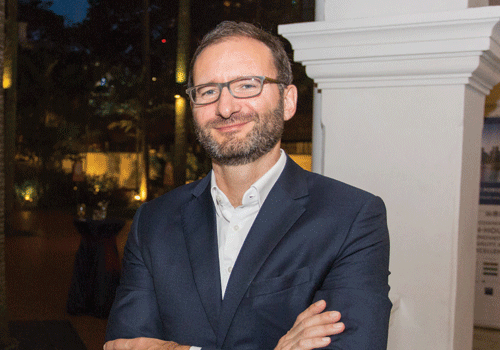 Much of that unusual behaviour evident in China, particularly with over-the-counter products and equity markets, can be attributed to the prevalence of retail investors, who account for approximately 80% of market participants. By comparison, US household participation in equity markets comprises an estimated 20% of overall ownership. This has made China’s markets more vulnerable to herd behaviour and the risk of contagion, compared to markets where institutional investors dominate.

‘I’m optimistic about China and I think the differences between China and Hong Kong as financial centres will minimise as time moves on. There are going to be bumps along the road, but it’s a huge internal market and it’s often the case that emerging markets will develop faster than the rule-making required to keep the right balance. Of course, China will make sure that Chinese firms will get the biggest pieces of the pie,’ says Kurth.

Institutions with operations in both Asia and Europe or North America are, in most cases, governed in accordance with the typically more stringent requirements of those jurisdictions. That has made it imperative for general counsel at banks with local subsidiaries to reach a global standard, even if that standard was far more comprehensive than required.

‘In our case, even though we only have a very minor presence in countries like the United Kingdom and the United States, we are still subject to the laws there across our business,’ explains one general counsel from an Indonesian financial institution.

‘Being in this part of the world and physically so far from those jurisdictions, it can make it tough to stay in touch with the regulators and keep up with the pace of law and regulatory change. This is where having strong relations with law firms and a network of in-house counsel from across other banks who are willing to engage on the subject becomes essential.’

This approach is common among the general counsel we spoke to, particularly through informal networks with their peers in the sector who have displayed a surprising willingness to cooperate with and assist in-house lawyers from rival banks and institutions.

‘We try to find out from other banks how they’re benchmarking their standards, whether that’s implementing processes and procedures or through their documentation,’ says Mohan.

‘If other banks are doing things in a certain way, that’s a sign that the regulator has, somewhere along the line, set that as a standard which we as an industry can follow.’