When Banksy, Monopoly and others draw the bad faith card

Misfortune continues for the famous British street artist Banksy. Since September 2020, in a succession of decisions, the EUIPO (the European Union Intellectual Property Office)  has so far invalidated six trade marks made up of  reproductions of Banksy’s iconic works that had been registered by Pest Control Office Limited, a company set up to represent Banksy’s interests while preserving his anonymity: 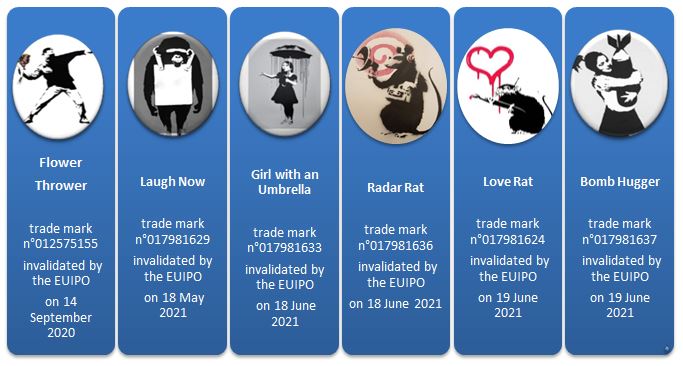 The strategy implemented through this company is to register trade marks, preserving the artist’s anonymity, in order to have a legal title to oppose against any company or any person who would like to trade in Banksy’s works without his authorisation (all other reproductions of his works remaining free).

The very first decision dates back to 14 September (see our newsflash of 23 November 2020)(1).  Following the request of Full Colour Black limited, a greeting card publisher, the EUIPO had cancelled the trade mark “Flower Thrower“, registered in 2014 in the name of Pest Control Office Limited.

According to the EUIPO, the trade mark owner had never, in fact, had the intention to use it in accordance with its function, namely to designate goods or services, and the trademark had therefore been filed in bad faith.

In order to make the finding of bad faith, the Office had considered that :

The EUIPO’s decision was not contested.

On the basis of this first success, Full Colour Black subsequently filed invalidity actions on the same basis against five other European trade marks registered by the same company, Pest Control Office Limited, and corresponding to five works by Banksy, just as emblematic as the “Flower Thrower“. It is logically in the same direction that the EUIPO issued five decisions to cancel these trademarks on 18 May and 18 & 19 June 2021(2).

This also leaves little room for doubt as to the fate of the new European trademark n°018118853, filed on 30 August 2019 for the “Flower Thower“, which is also the subject of a request for cancellation by the same company Full Colour Black.

More than ever, this series of decisions thus calls into question the artist’s protection strategy and may force him to drop his anonymity if he wants to avoid the commercial exploitation of his works by others.

It also highlights one of the many aspects of the notion of bad faith, a notion which is not defined by the legal texts and whose contours are therefore a matter of legal precedent. Article 52(1)(b) of Regulation 207/2009 provided that a Community trade mark shall be declared invalid, at the request of the EUIPO or on the basis of a counterclaim in an infringement action, where the applicant was acting in bad faith when he filed the application for the trade mark, without this notion being defined more precisely.

In the “Banksy decisions“, bad faith results from the will to obtain an exclusive right without intending to use it in accordance with the function of the mark, in order to overcome the impossibility for Banksy to rely on his copyright without giving up his anonymity. This is a form of undue appropriation.

Bad faith can also result from successive filings, as the European General Court (EGC) recently ruled in the “Monopoly” case(3) on 21 April 2021. In this decision, the EGC sanctioned the repeat filings of the trade mark Monopoly, even though this filing had been undertaken for a broader list of products. Although there is no provision in the EU trade mark regulations prohibiting the repeated filing of the same trade mark, the applicant having admitted that this new filing in particular enabled him to avoid the need to submit proof of use in the case of opposition, according to the Court, “such conduct cannot be held to be lawful conduct, but must be held to be contrary to the objectives of Regulation n°207/2009, to the principles governing EU trade mark law and to the rule relating to proof of use“.

The Court of First Instance thus rejected the applicant’s argument relating to the reduction of the administrative burden that would have resulted from this new, broader filing, reproducing the wording of the successive filings previously undertaken, insofar as these previous filings had not been abandoned. The intention to obtain an advantage from those rules, by artificially creating a situation in which the applicant would not have to prove genuine use of his earlier trade marks for the goods and services covered by the contested trade mark, is therefore sanctioned here. Such a behaviour is considered to be the consequence of an intention to distort and unbalance the trade mark law regime as established by the European Union lawmakers.

This decision thus goes further than the decision of the CJEU of 29 January 2020 in the so-called Sky case(4), in which the Court of Justice held that the filing of a trade mark without any intention to use it for the goods and services covered by the registration constitutes an act of bad faith, if the applicant of this trade mark intended either to undermine the interests of third parties in a manner inconsistent with honest practices, or to obtain, without even targeting a specific third party, an exclusive right for purposes other than those falling within the functions of a trade mark. The aim here is not to obtain an exclusive right or to undermine the interests of a third party, but to maintain a particular advantage by successive filings.

It has also been regarded as constituting bad faith if a trade mark is filed to extend the protection of a different earlier sign, with a defensive purpose. Thus the European General Court in a decision on 28 October 2020(5) ruled that bad faith could be characterised if the intention, at the time of filing the contested trade mark application, was to use this filing for other purposes, in particular to strengthen or protect a TARGET PARTNERS trade mark by filing a TARGET VENTURES trade mark, or to prevent third parties from using such a sign. It is therefore not in accordance with the functions of a trade mark for the applicant to register a trade mark without intending to use it, in order to prevent a risk of confusion with another trade mark they already own and/or in order to protect the common element of these two trade marks in this context, and this constitutes bad faith.

Bad faith can also, in a more classic way, be the will to undermine a specific third party, as recalled by another recent decision of the European General Court(6). In this latter case, the Court cancelled the European trademark Choumicha Saveurs, Choumicha being the name of a Moroccan chef, whose reputation among the Moroccan community in France and Belgium prior to the filing of the contested trade mark could be demonstrated. The court held that it was impossible for the owner of the contested Community trade mark “not to be aware of the reputation of the applicant, given that it was a wholesale food company whose manager was himself from Morocco. Furthermore, it had not presented any evidence of its good faith or explained the commercial logic behind the registration of the Choumicha Saveurs trade mark. As the applicant’s bad faith stemmed from his intention to harm, in a manner not in accordance with honest practices, the interests of a particular third party, the contested trademark is cancelled for all the goods and services it designates, including for goods for which the applicant, Ms Choumicha Chafay, had no use. The court considered that in the applicant’s motives it is not possible to distinguish between goods for which there is an intention to harm and others, referring for that purpose to the judgment of 12 September 2019, Koton Mağazacilik Tekstil Sanayi ve Ticaret AŞ /EUIPO (C 104/18 P, EU:C:2019:724, paragraph 61).

These various decisions thus define the outlines of the subjective notion of bad faith. Although the European regulations do not require intent to use when filing, unlike the Lanham Act in the case of a filing in which use has not yet been established in the United States, one may nevertheless wonder whether these decisions do not bring us closer in some way to the American system. In any case, applicants for European trade marks should at least ensure that their applications are in accordance with this use-based logic, which remains the essential function of the trade mark.

Cabinet Beau de Loménie
Registration of sound trade marks under Regulation (EU) 2017/2001: what is the mood music from the European judge?
September 23, 2021