Business Rehabilitation in Thailand: What Every Thai and Foreign Creditor Needs to Know

As Covid19 continues to wreak havoc around the globe, its devastating impact on Thailand’s economy is becoming increasingly apparent.  With its borders closed to international travelers for the foreseeable future, Thailand’s tourism industry, whose revenues account for more than 15% of the country’s total GDP, has been largely decimated.  Businesses heavily reliant on tourism have closed their doors in the thousands – and many companies who were already experiencing financial difficulties pre-Covid19 have now been pushed over the edge into insolvency.

Next came Thailand’s long-embattled national carrier, Thai Airways International Public Company Limited (“THAI“), who filed its own business rehabilitation petition with the Court on May 26, 2020, citing financial difficulties resulting from the Covid19 pandemic.  Once seen as a shining corporate beacon and the pride and joy of the nation, the airline is now burdened by debt totaling a staggering THB 354 billion (approximately USD 11.2 billion) as of March 31, 2020.  A preliminary hearing is scheduled for August 17, 2020, when the Court will decide whether or not to allow THAI to proceed with its business rehabilitation.

For ease of reference, a diagram illustrating the key milestones and timeframes associated with a typical rehabilitation proceeding in Thailand is shown  below. 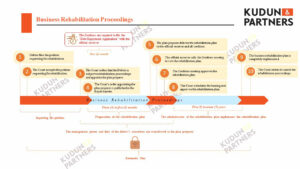 Anatomy Of A Business Rehabilitation Proceeding

On the flip side, as a protective measure for creditors, an automatic stay imposes significant restrictions on the ability of the debtor to dispose of, distribute or transfer its assets, to enter into lease arrangements, to repay existing debts or create new debts, or to take actions which have the effect of creating an encumbrance over the debtor’s property, unless necessary for the continuation of the debtor’s normal business operations.  Violations of these automatic stay restrictions by a debtor will attract criminal penalties.

Creditors should pay particular attention to the restrictions imposed by the automatic stay provisions of the Bankruptcy Act, particularly in the context of any bilateral debtor discussions, as any agreements entered into with the debtor which are contrary to or inconsistent with these restrictions will not be legally binding on the debtor and may be struck down by the Court as void.

After the Court issues an order for rehabilitation, creditors must file a debt repayment application (“Debt Repayment Application“) with the Official Receiver within one (1) month from the date that the appointment of the Plan Preparer is published in the Royal Gazette. Creditors should be aware that this one-month period cannot be extended – and the Bankruptcy Act expressly prohibits claims from creditors who fail to file their Debt Repayment Application within the prescribed one-month period.

It is critical that creditors prepare sufficient documentary evidence to support their Debt Repayment Application.  Foreign creditors should also be aware that documents in languages other than Thai must be accompanied by certified Thai translations. In addition, any documents supporting a creditor’s Debt Repayment Application made outside Thailand will need to be legalized, notarized or consularized before submission to the Court.

A creditor’s Debt Repayment Application may be challenged by other creditors, the Plan Preparer, and/or the debtor. If this happens, an investigation into the validity of the creditor’s claim will be undertaken and the affected creditor may be required to present additional witnesses and/or evidence in support of its Debt Repayment Application.  Upon conclusion of the investigation, the Official Receiver will issue an order specifying the amount of debt owed to such creditor for the purpose of the rehabilitation proceedings – and such amount of debt thereafter be used to calculate the voting rights of the relevant creditor in all creditors’ meetings relating to the rehabilitation proceedings.  Accordingly, it is critical that all creditors – particularly foreign creditors to whom additional evidentiary and procedural requirements will apply – must consult Thai legal counsel on their Debt Repayment Application in order to preserve and protect their rights as creditors in the rehabilitation proceedings.

2.      at a meeting of one creditor group, by a majority vote, provided that (a) the total aggregate debts of the creditors voting in favor of the resolution is not less than two-thirds of the total aggregate debts of all creditors of that group present at the meeting, and (b) the cumulative amount of debt held by all the creditors who have approved the Proposed Rehabilitation Plan is not less than 50% of the total debt owed by the debtor.

Creditor(s) who disagree with the Proposed Rehabilitation Plan are entitled to propose amendments by filing a petition with the Official Receiver at least three (3) days prior to the date of the creditors’ meeting.  If the Proposed Rehabilitation Plan is approved in the creditors’ meeting and endorsed by the Court, a plan administrator will be appointed to implement the approved rehabilitation plan and all creditors will be bound by the repayment terms and conditions specified therein.

In the next episode, we will elaborate on the benefits and restrictions of the automatic stay, an overview of the different creditor groups, and the key issues that creditors should insist be included in the Proposed Rehabilitation Plan.

For more publication from Kudun and Partners, please visit our page: https://www.kap.co.th/news-and-insights/

ILAWASIA CO.,LTD.
Updates on Amendments to Thai Copyright Act
May 12, 2021

Kudun & Partners
Enforcement and Setting Aside of an Arbitral Award in Thailand
February 23, 2021