Innovation in healthcare of all types is on the rise in Brazil. As this article will show, large investments have been made and are continuing to be made across all parts of the sector.  With continuing investment, it is more important than ever that all those involved give active consideration to intellectual property rights and in particular to the ownership of such rights.  Experience suggests that it is far better to deal with matters in advance to avoid the cost and uncertainty of future disputes.

Human health digital technologies and molecular diagnostics have been described as the major drivers of innovation in Brazil [1]. Meanwhile, diagnostic companies and private research hospitals, considered protagonists of a complex ecosystem, have had to adapt to the new reality of Covid-19, as did all stakeholders of the health system: digital transformation.

Diagnostic companies and private hospitals are now leaders in an ongoing consolidation of different segments of the health care industry. They are relying on startups, deals with local universities, expanding businesses in Latin America and considering expansion to other parts of the world.

One arising issue is potential disputes between investors, inventors, entrepreneurs, employees and institutional partners regarding the ownership of Intellectual Property (IP) Rights. The more that companies foster innovation, the more they need to make sure of sound, up-to-date contracts addressing IP rights.

Approximately three years ago, DASA, the biggest diagnostic company in Brazil, made the first move towards integrating health care by investing in the acquisition of hospitals. It became the second biggest hospital group, behind Rede D’Or. DASA’s main competitor in the diagnostic field, Fleury, recently merged with Hermes Pardini, another giant in diagnostics and research [2].

Figure 1 indicates two additional institutions that are often in the headlines as leaders of the consolidation process, Rede D’Or and the Hapvida-Intermédica group. The merger of Hapvida and Intermédica group was completed in the beginning of 2022 and just some months later, SulAmérica, their competitor in the insurance segment, was bought by Rede D’Or. 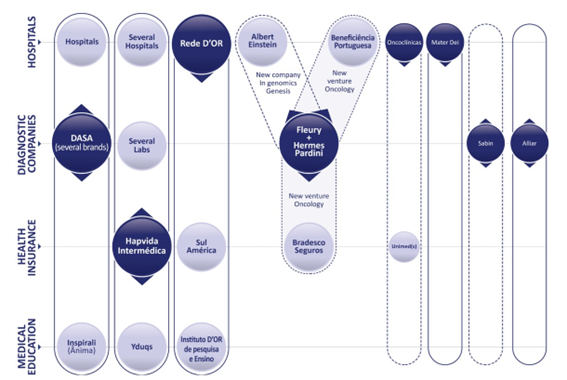 Other relevant examples as provided in Figure 1 are: Oncoclínicas, a divestee from Fir Capital [3] and the hospital Mater Dei. Both are among the five biggest hospital groups [4]. In addition, the figure shows two other diagnostic laboratories, Sabin and Alliar. It is worthy of note that both genomics and oncology are areas of intense competition among the leading consolidators (figure 1). These are also drivers for joint ventures. In partnership with the Albert Einstein Hospital, Fleury is creating a new genomics company, to be called Genesis. The goal is to group the initiatives of both institutions (Fleury and Albert Einstein Hospital) in one genomics company. In oncology, Fleury is establishing a partnership for a new company with the hospital Beneficiência Portuguesa and the insurance company Bradesco Seguros (which is one of Fleury’s major shareholders). The group Oncoclínicas, specialized in oncology, established partnerships with different Unimeds (which are medical cooperatives that offer insurances).

In terms of therapeutic priority, oncology is the focus for the institutions represented in figure 1. Genomics is an extremely important business for all the diagnostic companies and hospitals, it is an expanding market. It only represents 1% of the total market of diagnostic tests, estimated at R$25 B in 2022. By considering that in the US this percentage is of 10-20% of the total tests, the assumption is that the opportunity for growth is ripe. In fact, both Fleury and DASA have reported a two-digit consistent annual growth rate since 2017 [5].

Table 1 shows some innovation hubs dedicated to health care technologies created in the past few years. Most of them are accelerators, some have their own investment funds. They provide connections with investors, mentors and international hubs.

What kind of innovation is being developed by these healthtechs? Most technologies aim at management solutions, electronic health records, access, telemedicine14,15. It all looks like the innovation ecosystem is serving healthcare systems for local service delivery. According to one of the interviewees: “we had a stage in which there was a disconnection between the solutions being offered by startups and the problems that had to be solved, this is no longer the case, there is a good virtuous cycle now, but it seems to me that everyone is doing a bit of the same.”

Biotech patenting and the issues of ownership

Albert Einstein Hospital is trying to become an innovation powerhouse in Brazil. The Hospital is working  to foster an IP portfolio. The analysis of Fleury’s and DASA’s patents indicates that while Fleury received two patents, in the past decade, DASA’s activity during this period is limited to filing just one patent application.

With more filings of patent applications, Brazilian companies should make sure they have a policy establishing the ownership of IP rights. As provided by article 88 of the Brazilian Patent Statute (BPS), Brazilian employees’ invention rules should be applicable for those inventions originating from a work contract being performed in Brazil. Moreover, according to the Brazilian Superior Labor Court, it is not even necessary that a patent application is filed by the employer, as the employees’ inventions regime is triggered invention as soon as an “economic benefit for the employer” connected to the inventive activity of an employee exists [8].

Employee invention and IP rights is a topic governed solely by national law in Brazil. Since Brazilian Labor Law Courts can be very protective of the employees, foreign companies should give special attention to aspects of the acquisition of rights and the financial compensation of inventors, when applying its internal regulations to a Brazilian R&D department.

On the other hand and secondly, inventions made by an employee who was hired to perform research or an inventive activity, or when the invention results from the nature of the services for which the employee was hired, are fully owned by the employer (article 88 of the BPS). However, employers should not leave the interpretation of this complex provision of an employee’s status to the Labor Courts, which have already ruled that engineers are hired to plan and execute projects implementing known technologies, not to invent new processes or products [9].

Thirdly and finally, if an employee who was not hired to work directly with R&D makes an invention, article 91 of the BPS establishes a co-ownership of the invention between employer and employees. Article 91 of the BPS ensures ownership of 50% to the employee even in presence of multiple participating inventors, as well as an exclusive right to exploit the invention. In the cases of multiplicity of inventor-employees, the remaining 50% will be shared equally among all the inventor-employees. It is possible to set up other rules for such a situation in the labor contract, for example, sharing the ownership of future inventions in different proportions and the provision of financial compensations to inventors [10]. However, it maybe not so simple, as in some cases, the Superior Labor Court ruled that transfer of rights of future inventions are not allowed under Brazilian law [11].

The financial obligations the employer has, vis-à-vis its inventors employees depends on which if the three above regimes applies. If the invention is fully owned by the employer, complementary remuneration to the employee is due only if provided by internal regulation of the employer or by the labor contract. In such case, it becomes mandatory and cannot be subsequently excluded.

Otherwise, when the invention is co-owned by the employer and its employees, a “fair remuneration” is due to the latter. Such remuneration is provided by paragraph 2 of Article 91 of the BPS, which does not indicate the way to calculate it.

Brazilian labor courts have already established three methods: a lump sum; salary-based bonus; equal share of the profits derived from the exploitation of the invention. When applying the lump sum method, Labor courts do not reach exorbitant sums, being fixed in an arbitrary manner between R$15,000.00 and R$75,000.00 [12]. In one case, the Superior Labor Court retained salary-based bonus as fair remuneration to the employee, adding 50% to its monthly salary for the duration of the patent [13].

The Labor Courts are nevertheless adopting the share of benefits method to compensate employees. As a co-owner of the invention, the employee has his proportion of benefits realized by the employer with the exploitation of the invention. Such method was recently applied by the Superior Labor Court in a case involving the Brazilian Oil company Petrobras [14], where an employee was granted the right to obtain 16,66% of all benefits arising from the exploitation of the patent covering a “method for installing an undersea catenary riser” [15].

In times of increasing cooperation between R&D teams worldwide, companies are confronted with a puzzle of multiple jurisdictions and legal employee inventions regimes that should not be neglected to avoid financial and entitlement risks. A specific local legal approach should be considered to take full advantage of the local growing market and Brazilian inventive minds and efforts.  In short, companies should think global but act local.

With so much ongoing innovation, it is essential for companies to be careful and have a more strategic approach regarding their IP rights.

Patents should play a key role to protect Brazilian innovations in the biomedical sector. It is undeniable that Brazilian companies are innovating and investing more in R&D and they should make sure they are protecting these inventions.

[2] Some of the content of this article was previously published at https://bioengineeringcommunity.nature.com/posts/biomedical-innovation-in-brazil-an-update-the-upcoming-challenges-for-the-healthcare-industry.