India-Mauritius tax treaty has come under scanner yet again with a recent pronouncement by the Authority for Advance Rulings (“AAR”) in the case of Tiger Global International II Holdings, In re[1]. The AAR was called upon to adjudicate whether capital gains arising from the sale of shares held by Mauritius based Applicant companies [with further holding in a Singapore Company (deriving value substantially from assets located in India)] would be chargeable to capital gains tax in India.

AAR rejected the application at the admission stage itself on the basis of clause (iii) of proviso to section 245R(2) of the Income Tax Act, 1961 (“the Act”) which provides that applications relating to a transaction or issue designed prima facie for avoidance of tax shall not be admitted. The following findings and conclusion were recorded by AAR:- 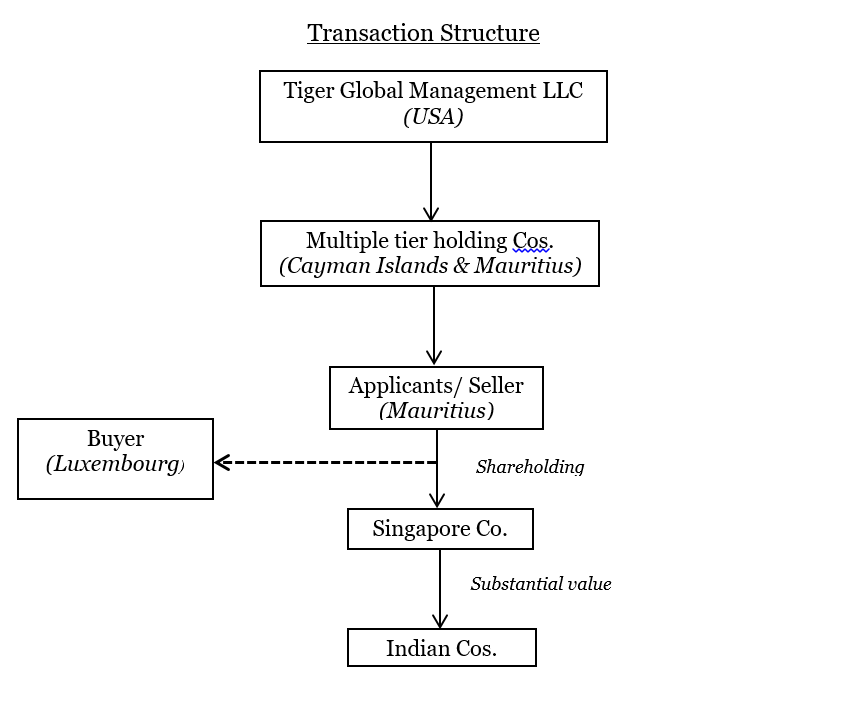 The term tax avoidance has not been defined under section 245R. The OECD defines tax avoidance as “an arrangement of a taxpayer’s affairs that is intended to reduce his liability and that although the arrangement could be strictly legal is usually in contradiction with the intent of the law it purports to follow”[2]. The Apex Court in the case of McDowell[3] has stated that “the art of dodging tax without breaking the law” is tax avoidance. Calcutta High Court in Hela Holdings Pvt. Ltd.[4], held “Tax avoidance is the result of actions taken by the assessee, none of which is illegal or forbidden by the law in itself and no combination of which is similarly forbidden or prohibited.”  The Supreme Court in Azadi Bachao Andolan, while considering the decision in McDowell’s case, observed, that it cannot be said that every attempt at tax planning is illegitimate, or that every transaction or arrangement which is otherwise perfectly permissible under law, but which has the effect of reducing the tax burden of the assessee, must be looked upon with disfavour.

The Supreme Court in Vodafone International Holdings B.V.,[5] held, “Section 9 has no “look through provision” and such a provision cannot be brought through construction or interpretation of a word ‘through’ in section 9. In any view, “look through provision” will not shift the situs of an asset from one country to another. Shifting of situs can be done only by express legislation.” This case dealt with the views on tax avoidance laid down in two landmark judgments i.e. McDowell and Azadi Bachao Andolan.  It was concluded that “Revenue cannot tax a subject without a statute to support and in the course we also acknowledge that every tax payer is entitled to arrange his affairs so that his taxes shall be as low as possible and that he is not bound to choose that pattern which will replenish the treasury. Revenue’s stand that the ratio laid down in McDowell is contrary to what has been laid down in Azadi Bachao Andolan, in our view, is unsustainable”. The AAR in Tiger Global Ruling mentioned Vodafone but did not consider the detailed discussion on tax avoidance in Vodafone, where Supreme Court had adopted a liberal attitude towards foreign holding structures that were in place for tax reasons. One fails to see why the AAR thought Tiger Global requires a different treatment.

Circular No. 682 dated 30th March, 1994 issued by the Central Board of Direct Taxes (“CBDT”) clarified that a resident of Mauritius deriving income from alienation of shares of Indian companies will be liable to capital gains tax only in Mauritius and will not have any capital gains tax liability in India.

The Protocol for Amendment of Convention for Avoidance of Double Taxation between India and Mauritius was signed on 10th May, 2016 which provided that taxation of capital gains arising from alienation of shares acquired on or after 1st April, 2017 in a company resident in India will be taxed on source basis with effect from financial year 2017-18. At the same time investment made before 1st April, 2017 were grandfathered and not subject to capital gains tax in India.

Applicants had acquired these shares of the Singapore company prior to the amendment in the tax treaty, and as such these shares were grandfathered. Despite the grandfathering provision, AAR denied capital gains tax exemption to the applicants, who had invested in India prior to 1st April, 2017. The application was rejected at the admission stage itself basis the holding structure coupled with the ‘control and management’ of the applicants as it was observed – “the entire arrangement made by the applicants was with an intention to claim benefit under India – Mauritius DTAA, which was not intended by the lawmakers, and such an arrangement was nothing but an arrangement for avoidance of tax in India.”

In coming to such a conclusion, AAR seems to have gone beyond what was intended to be achieved through the grandfathering provision. AAR disregarded the well-settled proposition – “treaty shopping doesn’t tantamount to avoidance of tax” which means that any arrangement done within the framework of law, to take benefits of tax treaties doesn’t mean avoidance of tax, which was upheld by the Hon’ble Apex Court in Azadi Bachao Andolan[6].

BEPS Action 6 on “Preventing the Granting of Treaty Benefits in Inappropriate Circumstances” targets tax treaty shopping by multinational enterprises that establish ‘letterbox’, ‘shell’ or ‘conduit’ companies in countries with favourable tax treaties to take advantage of the treaty benefits. But the Action Plan has not been converted into a binding provision yet and despite the renegotiation of the DTAAs, the law laid down by the Supreme Court in the Azadi Bachao Andolan remains unchanged at least as far as grandfathered investments are concerned.

Clause 3A of Article 13 (inserted via 2016 Amendment) provides that – “Gains from the alienation of shares acquired on or after 1st April 2017 in a company which is resident of a Contracting State may be taxed in that State.” Thus, clause 3A provides that when shares of a company resident in India (contracting state) are alienated, only then can the gains be taxed in India. Therefore, clause 3A only encompasses direct transfers. In indirect transfers, the alienation is not taking place in the contracting state, to which clause 3A cannot be extended.

Further, clause 4 of Article 13 provides – “Gains from the alienation of any property other than that referred to in paragraphs 1, 2, 3 and 3A shall be taxable only in the Contracting State of which the alienator is a resident.” This clause provides taxing right of “any other property” to the country of residence of the alienator. Thus, this residuary clause would include indirect transfer of shares as it would cover gains from alienation of shares in any country, other than shares resident in a Contracting State.

The ruling has also diverted from the earlier judicial pronouncements where the benefit of tax treaties has been extended to indirect transfer of shares.[7]

Sans Tax Liability in India – Can there be Tax Avoidance?

Chapter XIX-B on Advance Rulings was introduced vide Finance Act, 1993 and section 245R(2) that provides for rejection of application where the transaction is designed prima facie for the avoidance of income-tax was introduced, along with rest of the AAR provisions in 1993. Tax avoidance is stricter than tax evasion while also being legal, as opposed to evasion which is per se illegal. But still the term avoidance is used, that means the test to qualify for admission before AAR is a more stringent test.

However, for ascertaining whether tax has been avoided in a country, it still needs to be first ascertained if tax liability is arising in that country. In the instant case, the shares sold were held in a Singapore Company, the seller of shares was incorporated in Mauritius and the buyer of shares was in Luxembourg. Given the structure of the companies and the transaction, prima facie, the
Mauritius-Singapore tax treaty should govern taxability of gains arising from the transaction.

For the sake of argument, even if one accepts that Mauritian entities were shell companies which ought to be disregarded, the transaction would then be deemed to be taking place between companies situated in USA and Singapore. Currently, there is no tax treaty between the two countries. Therefore, the taxability of the transaction should be governed by applicable US/ Singapore Law.

AAR in the case has not demonstrated how under the existing treaty network, tax liability of sale of shares would arise in India. Though indirect transfer of shares can be taxed under the Indian Income Tax Act, these provisions do not come into play where the treaty network provides that the liability to tax capital gains is not in India. Beneficial treaty provisions would override Indian domestic law. In this context it is also pertinent to note that the ‘indirect transfer provision’ under Indian Law does not have any treaty overriding clause.

In X Ltd., In re[8], applicant companies, resident in Mauritius, were fully owned subsidiaries of a British company and had made investments in shares of an Indian Bank. AAR held that had the British company directly invested in India, capital gains arising on their sale would have been taxable both in India and England, under India-UK DTAA, whereas because of investment in shares in India through applicant companies resident in Mauritius, capital gains was exempt from tax in India. Therefore the purpose of investment by British company through applicant-companies was for avoidance of tax within meaning of clause (c) of first proviso to section 245R(2) and, therefore, the applications deserved to be rejected.

In the case of Tiger Global, AAR held that the Mauritius-registered companies were only ‘see-through entities’ and real beneficiary was the USA based parent company. Without establishing tax avoidance in India, AAR rejected the application, holding that entire arrangement was to claim benefit under India-Mauritius tax treaty and avoid tax in India.

The Ruling has reignited the controversy surrounding intermediary holding structures and indirect transfer of shares. The increasing scrutiny by tax authorities and judicial inclination towards substance over form has resulted in benefits under the India-Mauritius tax treaty being denied even for grandfathered investments. Though the decision and reasoning adopted by AAR may be questionable, likely to be reviewed by higher courts, it is a timely reminder for global investors to review existing structures and monitor the substance/ business rationales underlying these multi-tier structures. Investors need to be bear in mind the parameters for establishing commercial substance and beneficial ownership. Further, considering the wide ambit of GAAR provisions and that of Principal Purpose Test under MLI provisions, corporates would require robust and meticulous planning to avail treaty benefits and not fall prey to anti-avoidance regulations.