Tax Incentives for the Investment in Thai Startups.

The Thai government has been encouraging all Thai businesses, both corporate and individual, to put more and more investment in Thailand, particularly in local startups this year in order to help boost economic growth after the COVID-19 pandemic is gone.

For instance, Thailand’s Board of Investment (“BOI”) is empowered to promote qualified business with tax and non-tax incentives granted to businesses. Yet, such tax incentives are limited to corporate income tax exemption and dividend tax exemption. Income tax on capital gains derived from disposal of shares held in the startup business will not be exempt under BOI promotion. With the new tax incentives for startups, the Thai government via the Cabinet’s resolution on 8 March 2022 additionally provides investors who make an investment in startup business with income tax exemption on capital gains arising from disposal of their shares in the startup.

Back in 2016, the Thai government introduced the Royal Decree Issued under the Revenue Code regarding the Exemption of Taxes (No. 597) 2016 (“Royal Decree No. 597”). Hence, the tax incentives for the investment in startups is not new. It is interesting to note that, according to the Royal Decree No.597 issued on 10 February 2016, when a Corporate Venture Capital (“CVC”) invested in the business operating in the targeted industries, the following incentives were granted to the CVC on a condition that the CVC must registered with the Thai Securities and Exchange Commission (“SEC”) by 31 December 2016:

In addition to the tax exemption for the CVC that invests in the targeted industries, the Royal Decree No. 597 also provides exemption of income tax for individual and corporate investor who invests in the CVC level for the following:

With respect to the investment through a Private Equity Trust (“PE Trust”) which is another vehicle for investment, the Royal Decree No. 597 has granted the same incentives to the unitholder of the PE Trust provided that the PE Trust registered with the SEC by 31 December 2016.

Unfortunately, a direct investment in a targeted company would not be granted any tax incentives under the Royal Decree No. 597. The reason is that if a Thai company holds at least 25% outstanding shares in a targeted company which is another Thai company, the dividend will already be exempt from corporate income tax subject to the conditions set out by the Revenue Code. Therefore, the law only provides tax exemption to the investment through CVC or PE Trust.

Given that not many startups could meet the timeline and get them registered by the SEC within 31 December 2016, the Thai government has decided to continue the investment promotion in startups in the following year. Hence, the Royal Decree Issued under the Revenue Code regarding the Exemption of Taxes (No. 636) 2017 (“Royal Decree No. 636”) was enacted with similar principle where the CVC and PE Trust were required to be registered with the SEC from 1 January 2017 to 31 December 2018.

Again, if the CVCs and PE Trusts are not registered with the SEC within the deadline, i.e. after 31 December 2018, they are not qualified to enjoy these incentives.

The Renewal of Tax Incentives for the Investment in Startups.

Due to the impact of the COVID-19 which severely affects national GDP and Royal Decrees No.597 and No.636 are no longer valid, many measures to promote inbound investment in technology and startup business are being brought back to the Cabinet by the Digital Council of Thailand. The Digital Council of Thailand demanded another series of tax incentives to be given to the startups for technology related businesses following the government policy to drive Thai economy more rapidly and recently the Thai Ministry of Finance proposed a bill with respect to tax incentives and measures to promote fund raising for startups to the Cabinet.

On 8 March 2022, the Cabinet approved the principle of the tax incentives and measures to promote investment in startups of certain businesses especially technology related businesses following the government policy. It is expected that all tax incentives similar to the Royal Decrees No. 597 and No. 636 are to be granted, i.e. to encourage the investment in startups and to increase more opportunities for startups to raise capital and find potential business partners.

Interestingly, as the Thai government has experienced the hurdles after the launch of Royal Decrees No.597 and No.636, the bill is aimed to improve certain conditions under those Royal Decrees by providing exemption for the capital gains derived from the disposal of shares in a “targeted company” for investors in Thailand and outside Thailand.

Although the definition of a “startup” has not yet been clearly stated, this bill is to deal with startups in particular. According to the bill, a startup will be referred to as a “targeted company”, i.e. the business operating in the government-promoted industries which, at present, are the following 14 industries:

The key condition is that to be a qualified targeted company, companies are required to obtain an approval from the agencies announced by the Revenue Department, namely the National Innovation Agency and the National Science and Technology Development Agency under the criteria that the relevant agency requires.

Tax Incentives under the Bill.

The given tax incentives are based on the form of investment as follows: 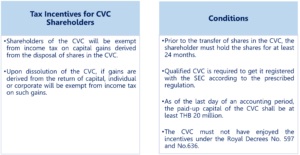 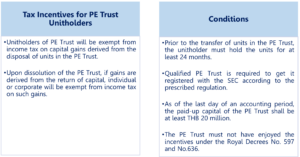 Importantly, the tax incentive will be available from the date the law becomes effective to 30 June 2032.

As the bill is silent on BOI application and prohibition, startups could apply for BOI’s promotion to maximize the incentives for the business itself and the shareholders. Subject to the BOI promotion scheme for each type of industry, startup could enjoy corporate income tax exemption from 3 to 8 years. In addition, during the promoted period, shareholders could also be exempt from dividend tax. Capital gain tax exemption will be a plus tax incentive that the shareholders of startups could enjoy according to the bill.