In Part I of  ELP’s three-part series relating to product quality standard regulations applicable in India (BIS Standards), the overall regulatory environment in India and India’s commitment at WTO was discussed at a macro level. In Part II, we delve into the legal provisions relating to BIS Standards, issuance of Quality Control Orders (QCOs) which make compliance with BIS Standards mandatory, and the issuance of BIS licenses. This issue deep dives into legal provisions and certain ambiguities and complexities in India’s legal framework on the BIS front.  The article also then goes onto discussing potential ways in which companies can navigate these complications. 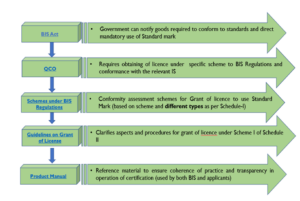 Pointers for companies: The relevant industry players should keep themselves informed as regards such consultations and submit their suggestions to the draft Standards. In case of any identified gaps between what the Standard prescribes and the practical feasibility of the testing requirements/ technological challenges, necessary representations may be made to the relevant BIS Sectional Committee to consider revision of the Standards. It is advisable for the companies that have a dominant place in the market to pitch for becoming part of such committees to make sure that their key inputs are taken into consideration while developing the standards.

Coverage of products under the QCO

Pointers for companies: The coverage of certain products/raw-materials/parts etc. within the scope of the QCO need to be specifically addressed by an applicant after examining the exact language of the QCO itself as well as the underlying Indian Standard which is made mandatory by the QCO.

Applicability of QCOs to imported and exported goods

Pointers for companies: It is important to analyze the text of the QCO no sooner than its draft is made public to identify its coverage and its bifurcation of products. This should be done immediately in order to represent the concerns of the stakeholders as regards the applicability of the QCO to the relevant ministry.

Timelines for implementation of QCO

Pointers for companies: During the consultation phase with the Government, prior to issuance of a QCO, industry should make adequate representation on various aspects of the QCO in relation to which relief is required. This includes the date of implementation, specific exemptions for stock in hand or products meant for exports, relevant Scheme of certification to be adopted, coverage of the products etc.

The BIS license is required to be taken in relation to the “manufacturing premises”. In certain cases, an issue arises as to whether the license would be required for all the premises where any form of processing of the product is carried out. On this issue, although there continues to be legislative ambiguity, one may explore the following positions [after taking into account any clarifications issued by the Government in relation to the specific QCO]:

Guidelines for Grant of License

Pointers for companies: Even after obtaining the license, the account on the portal should also be regularly checked to note any new requirements notified by BIS from time to time.

Penal Consequence and the Option of Compounding

[5] Defined as follows: “a manufacturer, an importer, a distributor, retailer, seller or lessor of goods or article or provider of service or any other person who uses or applies his name or trade mark or any other distinctive mark on to goods or article or while providing a service, for any consideration or gives goods or article or provides service as prize or gift for commercial purposes including their representative and any person who is engaged in such activities, where the manufacturer, importer, distributor, retailer, seller, lessor or provider of service cannot be identified”