There has been some recent interest from the GOE in certain aspects of the Compulsory Licensing (CL).  They are beginning to explore it inter alia, in the pharmaceutical industry.

CL is a balance of interest provision found in the TRIPS (Trade-Related Aspects of Intellectual Property Rights) Agreement.  It balances between the exclusivity right of the innovator and the interests of a country to use the protected patent without compromising the financial interests of the innovator.  It is available to the WTO members and is stipulated in the Article 31 of the TRIPS (1).

The Egyptian legislator included CL in the Law on the Protection of Intellectual Property No. 82 of 2002 (2). Articles 23 and 24 of the IP Law dealt with the compulsory licensing system for patents in terms of the justifications, conditions, and procedures for granting compulsory licensing. According to Article 23 of the IP Law, procedures for granting CL of patented products require the approval of a Ministerial Committee formed by a decision of the Prime Minister. It is worth noting that, since the law was issued in 2002 and until today, no compulsory licenses have been issued.

In early February 2020, the Prime Minister issued a decree forming the Ministerial Committee stipulated in Article 23 of the Law .

The Egyptian CL regime is an administrative regime subject to revision of the Administrative Court. Its provisions are articles 23 & 24 of IP law No. 82/2002, the executive regulation of IP law articles No. 36 -43 (4). The Prime Minster Decree No. 251/2020 (3) formed the Ministerial Committee that shall examine the requests and issue CL approval. Issuing the CL itself is the responsibility of the Egyptian Patent Office (EPO) according to article (23) of the Egyptian IP Law.

Article 23/1 of the IP Law can be outlined as follows: 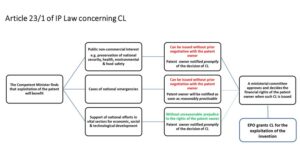 Requesting of Compulsory Licensing of a certain pharmaceutical product by the Minister of Health due to an urgent medical situation:

According to article 23/2, special CL shall be issued by the EPO as follows 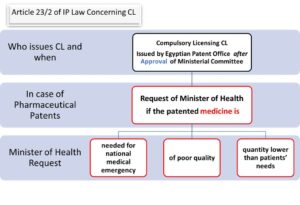 Other Cases Explained in Article 23:

EPO may subject to the approval the Ministerial Committee grant CL for the exploitation of an invention. The committee decides the financial rights of the patent owner when such CLs are issued, in any of the following cases outlined below: 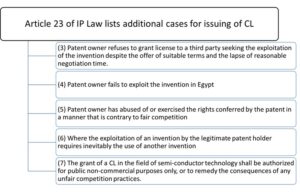 Use of the CL shall be limited to the applicant; EPO may however grant it to a third party.

Outlines of the CL steps in light of the Egyptian IP Law are as follows: 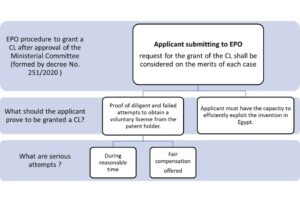 So, the following documentation should be included to support the applicant’s request to be granted a CL:

Ibrachy & Dermarkar
The President of the Egyptian Drug Authority (EDA) is Now a Member of the Compulsory Licensing Ministerial Committee
October 28, 2021

Ibrachy & Dermarkar
Egypt Remains on the Watch List in the 2021: Special 301 Report about IPR Protection
September 2, 2021

Ibrachy & Dermarkar
On the legal and economic risks of Minority Shareholdings in Tobacco Industry
June 24, 2021