The company liquidation is a complex and often long-term process requiring the legislation knowledge and development of a clear and step-by-step plan for winding-up. The company liquidation period in Ukraine depends on just how each step is prepared and complies with the applicable legislation. When liquidating a legal entity, it should be noted that it ceases to exist, but its property, rights and liabilities are not transferred to legal successors.

The legal entity is liquidated by the decision of its shareholders (a legal entity body authorised to do so by its constituent documents) or by a court decision. It is important to properly determine the company liquidation method. Meanwhile, a lot of various aspects should be taken into account, in particular: a company legal status; its financial position; the occurrence of such encumbrances as pledges; litigations (with debtors, creditors) or a property seizure, etc.

This article describes a step-by-step procedure for liquidating a Ukrainian limited liability company by its shareholders. A foreign company representative office in Ukraine shall be liquidated through a similar procedure, although there are several differences. 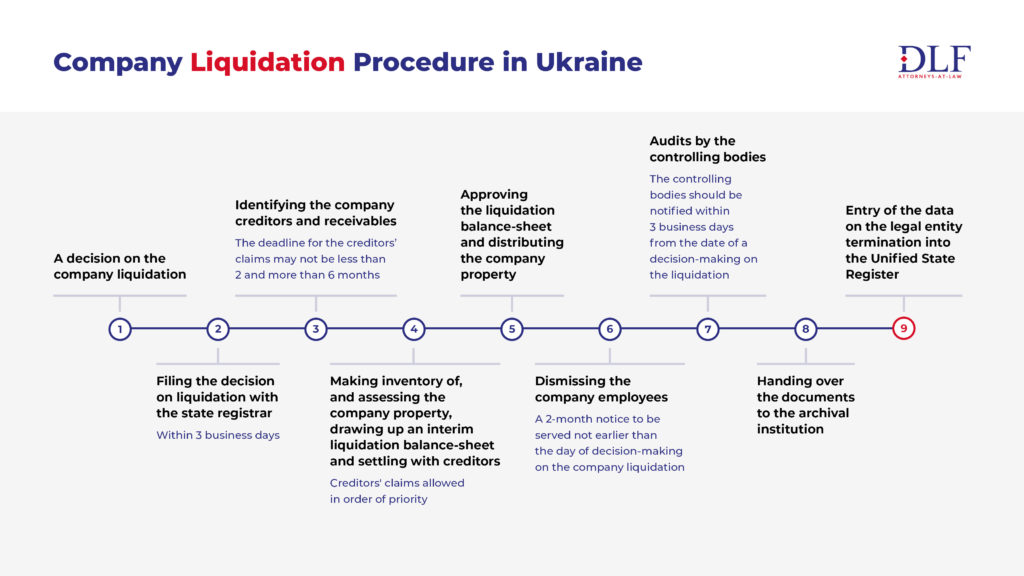 The procedure for the company liquidation by its shareholders’ decision can be divided into several stages:

1. Decision-making on the company liquidation

The decision on the company liquidation shall be made by its general shareholders meeting and shall be set forth in writing. Such a decision should include as follows:

It would also be a good idea to include in such a decision the deadlines for handing over to the liquidation commission (liquidator) the company accounting and other documents, seals and stamps, its tangible and other valuables, and to appoint the officials responsible for handing over such documents.

It should be noted that from the date of the liquidation commission (liquidator) appointment all powers and rights as to managing the company affairs should be transferred to it.

2. Filing the decision on the company’s liquidation with the state registrar

Shareholders are obliged to inform the state registrar at the company location about the decision on the company liquidation within 3 (three) business days from the date the relevant decision has been made.

For that purpose, it is necessary to file with the state registrar an original decision (or a notarised copy) on the legal entity termination. Such a decision should also confirm the appointed liquidation commission members (liquidator) and include the period during which creditors may file their claims against the company.

The necessary documents having been filed, the State Registrar shall record in the Uniform State Register the decision on the legal entity termination and notify thereof the statistical authorities, the State Tax Service, the Pension Fund of Ukraine and the Social Insurance Fund of Ukraine, the State Employment Centre.

3. Identification of the company creditors and receivables

Having analysed the company accounting data, financial and other documents, the liquidation commission (liquidator) should independently identify the creditors and serve them the relevant notices with a proposal to make their claims. The term for making claims by the creditors to the company may not be less than 2 (two) and more than 6 (six) months.

In the same way, the liquidation commission (liquidator) shall take all necessary measures to recover the company receivables and notify each of the debtors in writing of the legal entity termination. If the debtors refuse to repay the indebtedness, the company shall file a lawsuit for a debt recovery against them.

4. Inventory and assessment of the company property, drawing up its interim liquidation balance-sheet and settlement with creditors

When liquidating a company, an inventory is required to be made. In such a case, the company fixed assets, intangible assets, commodities and materials, funds and documents and settlements, i.e. all the company assets and liabilities should be checked out. Particular attention should be paid to reflecting the surpluses and shortages, and writing-off of time-barred debts in the accounting documents.

It is also necessary to assess the company property. Meanwhile, the property assessment consists mainly in bringing the assets value in line with the value of their possible sale and in accepting the additional liabilities (for example, a severance pay for employees) or in reducing the cover funds to compensate the deferred charges (for example, to pay the company employees’ leaves) to be incurred by the company due to the decision-making on liquidation. As a rule, the company inventories, assets, and liabilities should be assessed.

First priority: Claims to compensate the damage caused by an injury, other damage to health or death, and creditors’ claims secured by collateral (pledge) or otherwise;

Second priority: employees’ claims related to labour relations, those as made by the author in respect of a fee to be paid for the use of the results of his/her intellectual and creative activity;

Fourth priority: All other claims.

The same priority claims shall be allowed proportionally to the amount of the claims due and payable to each creditor of the same category. The creditor’s claims, made after the expiration of the term as set by the liquidation commission (liquidator) for their making, shall be allowed on account of the company property remaining after allowing the creditors’ claims, made when due.

The creditors’ claims not accepted by the liquidation commission (unless the creditor has filed a lawsuit (claim) with a court), and the creditor’s claims dismissed by the court, shall be considered satisfied.

5. Approval of the company liquidation balance-sheet and property distribution

If after the settlement with all creditors the company has any funds or property, then they shall be distributed among the company’s shareholders proportionally to their shareholding in its authorised capital.

Particular attention should be paid to the employees’ dismissal. In accordance with the Ukrainian law, the company liquidation shall serve as a ground for the company (liquidation commission or liquidator) to terminate a (fixed-term or termless) employment contract.

The employment contract termination in case of the company liquidation does not require the trade union’s consent (if any). The employees should be served with the 2 (two)-month notices of their future dismissal, but not earlier than the day of decision-making on the company liquidation. Employees should be made aware of the respective order against their signature to confirm the dismissal notice delivery.

If the company employees are dismissed due to the company liquidation, each employee should be paid a severance benefit. It should not be less than an employee’s average monthly salary.

All payments having been completed, the company should close all current accounts with banking institutions and obtain account statements for the last 3 (three) years, revoke all issued certificates, permits, customs accreditations, etc. The securities accounts (if any) should be also closed.

7. Audits by the controlling bodies

In order to verify the correctness of the calculated and paid taxes, fees, a single social contribution to the state compulsory social insurance fund, the liquidation commission representative or liquidator shall file the documents required for such a verification with the bodies of the State Tax Service, the Pension Fund, the Social Insurance Fund of Ukraine and the State Employment Centre.

It should not be forgotten that the company is obliged to notify the relevant tax authority of its liquidation within 3 (three) business days from the date of decision-making on its liquidation.

Having received all the necessary documents, the bodies of the Pension Fund, the Social Insurance Fund of Ukraine and the State Employment Centre shall also verify the correctness of the charged and paid contributions and issue the respective certificates in case of any arrears absence.

8. Handing over the company documents to the archival institution

The liquidation commission (liquidator) shall independently destroy the company seals, stamps, having drawn up the relevant act, and prepare the documents for storage in the archival institution.

When examining the documents value, the liquidation commission (liquidator) shall select the personnel-related and temporarily stored documents, the storage period of which has not expired. Simultaneously, the lists and the act for selecting the documents to be destroyed, which period of storage has expired, should be drawn up. The relevant documents shall be deposited with the archival institution.

9. Entry into the Uniform State Register of the data on the legal entity termination

The final stage of the company liquidation procedure shall be an entry by the state registrar into the Uniform State Register of the data on registering the legal entity termination due to its liquidation. For this purpose, the relevant application and the archival institution certificate on accepting the documents for storage should be filed with the state registrar.

GOLAW
Is there still any future for renewable energy in Ukraine?
October 19, 2020