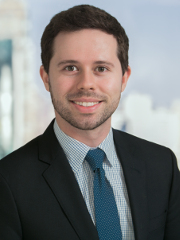 Sergio Torres is a corporate associate and a member of the firm’s Mergers & Acquisitions, Private Equity and Latin America Groups.

Mr. Torres is an Adjunct Professor at the Legal English Institute of Fordham Law School, where he teaches “Contract Drafting and Negotiation” to international students.

In 2022, he co-authored the preface of “Fusões e Aquisições: Pareceres” (Mergers and Acquisitions: Legal Opinions), a book compromising a collection of legal opinions rendered by Brazilian legal scholars in M&A arbitration disputes in Brazil.

He regularly writes for the firm’s Private Equity Report and, in 2016, he co-authored the article “Breves anotações sobre derivativos e securitização no Brasil” (Notes on derivatives and securitization in Brazil) published by Revista de Direito Empresarial.

Mr. Torres was an international associate at Debevoise from 2013 to 2014, and rejoined in 2016. Prior to joining Debevoise, he was a senior M&A counsel with Itaú Unibanco S.A. and legal counsel at Louis Dreyfus Commodities. Earlier in his carrier, Mr. Torres worked at Mexichem and Bunge.

Mr. Torres is fluent in Portuguese and English and proficient in Spanish.

He received an LL.M. from Stanford Law School in 2016, and his law degree from University of Blumenau, Brazil, in 2008. He also received an M.B.A. in Taxation from Fundação Getulio Vargas in 2009, and post-graduate degrees in International Trade from Instituto Internacional de Ciências Sociais in 2011, and corporate law from Pontifícia Universidade Católica de São Paulo in 2013.

Debevoise & Plimpton LLP ‘s prominence in insurance, infrastructure and private equity is evident in its Latin America M&A practice, along with energy, telecoms and mining. The team is also noted for transactions involving anti-corruption due diligence. It continues to represent a range of private equity houses and financial sponsors such as HIG Capital, CPPIB and Carlyle in Latin America deals, along with a number of international insurance companies. Maurizio Levi-Minzi co-heads the Latin America group and is a prolific adviser on M&A and private equity deals in the region. David Grosgold is highlighted for insurance and financial services deals in the region. At associate level, up-and-comer Sergio Torres is also noted, particularly for Brazil-related deals.