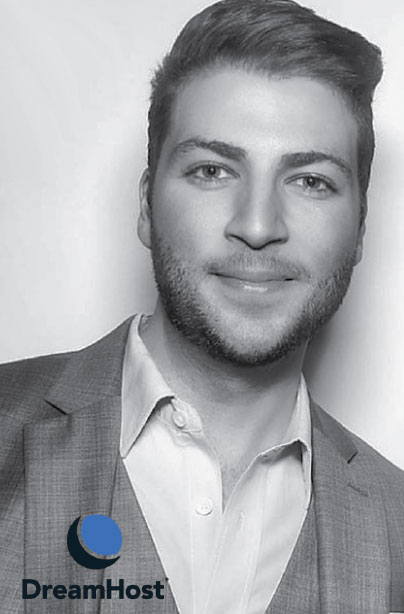 fivehundred magazine > The client side > Lawyers are blockers; leaders are closers

For this month’s interview, Helen Donegan, US Editor (Content), speaks to DreamHost’s Chris Ghazarian about his transition to the position of GC, the evolution of the in-house role, what he wants from outside counsel, and taking on the Department of Justice

Helen Donegan: To start off, can you tell me about your current role and what it entails?

Chris Ghazarian: I am the GC for DreamHost, a Los Angeles-based web hosting, domain, and cloud company with over 400,000 customers. My role is split between operational and strategic tasks. In the mornings, I maintain DreamHost’s legal department: managing the legal team, staying ahead of data privacy trends, and stopping litigation dead in its tracks. In the afternoons, I wear my strategic hat: brainstorming ways to continue growth, and guiding our people to perform at high levels during good and bad times.

HD: Your entry in the 2019 United States GC Powerlist notes that you started at DreamHost as a legal intern and just three years later, in 2016, you were offered the role as GC. How did this come about and what do you credit it to?

CG: Hustle, pure and simple. As an intern, I left an impression on our board of directors and CEO by showing them value where they didn’t expect it. I spent nights and weekends researching web hosting, data privacy, and their intersection with the law. I wrote legal memos for my superiors and offered simple solutions to complex business decisions they were facing. Without anyone asking me to do so. They liked it.

I continued the same approach after being formally hired. Passing off our legal issues to outside counsel seemed boring; why pay someone else tens of thousands of dollars every month to do the work for me? I asked our firms to take the back seat on legal issues, and instead, I ran the show while getting guidance and advice from them. Over time, my board realised that I was hungry for more, and they involved me in M&A, long-term strategy, and operations. Creating clarity and offering solutions seemed to come naturally to me, so I doubled down on that strength by using the same approach I had as an intern: research everything thoroughly, identify business-savvy solutions, and summarise them for our teams.

HD: You mention in the Powerlist that the transition to the GC role forced you to think more like a leader rather than just a lawyer. How do you differentiate these?

CG: Lawyers are blockers; leaders are closers. Most in-house lawyers silo themselves in an organisation and become the gatekeepers of legal knowledge. In contrast, a leader looks at an issue as an opportunity to bring teams together to solve problems that elevate the company to higher levels. For example, we’ve worked with lawyers who altogether avoid deals due to complex data privacy issues such as the GDPR. A risk-averse lawyer who shies away from opportunities will never be a leader.

My approach has instead been to ask: ‘What problems do we have, and how will I discover a novel solution?’ Optimising the legal department will result in free time to learn more about the company’s strategy, get involved in special projects, and contribute to the growth of the company. On the way there, a GC can learn how to identify goals, empower people, and properly respond to crises. Only then can a lawyer grow into a leader.

HD: Do you think lawyers, in general, are good leaders?

CG: They can be. A skilled lawyer can understand all angles of a business situation. After all, we spent years learning this approach in law school: analyse all possibilities and poke holes in presuppositions until every unknown is known. This brings clarity in times of uncertainty and change, which are two areas that, coincidentally, leaders must also excel at.

HD: You have been quoted in the Powerlist, saying: ‘In-house counsel are seeing an evolution in the scope of their role. More and more general counsel are now valuable partners for their CEOs and boards, and can shape the company vision and long-term strategy.’ Can you expand on this?

CG: Trust is the cornerstone of a perfect relationship with your executive team. If a lawyer has earned a favourable reputation via successful business and legal decisions, then the CEO and board are more likely to trust them with high-stakes matters. The trusted lawyer thus provides a different dynamic, one where the board and CEO can freely share ideas and strategies and receive valuable input from a legally-trained mind.

HD: Do you feel you have ever been underestimated because of your age and quick succession to the GC role? Not by DreamHost’s CEO and board who clearly believe in you, but by any of the other professionals with whom you interact?

CG: It’s rare, and it’s merely noise. The only thing that matters is the support and backing of my company and outside counsel. It has happened in the past. I was appointed GC when I was 28 years old, and that surprised some who considered me too ‘green’ for the gig. But, it’s easy to silence the naysayers with a successful track record. Cutting legal spend by almost 50% every year; winning multiple lawsuits against patent trolls; doing data privacy better than other website providers; prevailing in First Amendment arguments against the government… the wins speak for themselves.

HD: What have been the biggest changes you have made since becoming GC at DreamHost?

CG: The legal team has become a fantastic machine that runs without any drama. When I first joined DreamHost, legal issues and paperwork took up 90% of my time, and legal didn’t have much integration or involvement with other teams or projects. Now, our team participates in every single product launch and strategy meeting. We’re an integral part of the leadership at DreamHost, and we excel at identifying and solving not just legal issues, but business issues as well.

HD: The Powerlist notes that you cut your team’s legal costs by an average of 45% per year. How have you achieved this, and has it impacted your relationships with law firms?

CG: As I became more comfortable with the law after graduation, I reduced our outside counsel involvement on projects and deals. My goal has always been to learn from, and not rely on, outside counsel. My team and I use every interaction with counsel as an opportunity to bolster our internal knowledge of the law. If a repeat issue arises, we combine what we’ve learned with our analysis and make an informed decision. It’s been working quite well, and most of our outside counsel are still happily on board. We gladly said ‘goodbye’ to the firms who didn’t share our enthusiasm for lower billables.

HD: What are the most important things for you in the law firms you work with?

CG: Immediacy. All of my outside counsel answer calls and emails right away and offer solutions almost instantly. I’ve had lawyers call me back while on vacation halfway across the world; that’s appreciated and noted. There’s no room for delayed replies or unreturned calls, and we’ve dropped counsel in the past for leaving us in the dark for days on end.

Also, flexibility. Lawyers in many firms have a rigid, one-way approach to legal issues that they often push on their clients. In contrast, our outside counsel will tailor their plan based on our preferences, not theirs. This provides us business-friendly advice and guidance that is already aligned with our internal goals and saves us priceless time in the process.

HD: You referenced your win regarding First Amendment rights already. Can you tell me about your team’s opposition against a Department of Justice warrant for the IP addresses of internet users who visited a website organising protests against President Trump’s inauguration?

CG: The government tried to pull a fast one when they served us with a search warrant after President Trump’s inauguration. DreamHost provided services for a website called DisruptJ20 that covered news and developments of protests that occurred during President Trump’s inauguration in Washington, DC. In their warrant, the Department of Justice demanded a blanket production of everything on our servers related to this website. The problem? If DreamHost had complied, we would have handed over private emails, photos and videos, and over 1.3 million IP addresses of innocent internet users who were largely unaffiliated with any protests at all, and who merely happened to click on a news story shared by a friend or family member. Even if you hadn’t read the article, the fact that you visited the website would have been logged by the government for reasons that were never made public.

After polite discussions with the Department of Justice failed, we decided to oppose the warrant and went public with our story. News spread about our decision at a staggering pace; CNN, MSNBC, Fox, and over 700 other news sources featured us in a matter of days. Senators offered to lobby in favour of DreamHost. Silicon Valley tech giants drafted a joint letter supporting our position. Thousands of people wrote to us and sent us postcards voicing their approval. Above all, we were fighting for the First Amendment rights of individuals who would never have known that the government obtained a list of their browsing habits and political preferences.

Two days before our arguments in Washington DC’s Superior Court, the Department of Justice voluntarily dropped their request for the IP addresses. This was, by itself, a huge win for DreamHost, but other issues remained. We went forward with the hearing in front of Chief Judge Morin and successfully argued many of our points. After three months of back-and-forth discussions with the government and DreamHost, Chief Judge Morin agreed with a majority of our arguments, and we scored a huge win for internet users all over the world. This was a particularly impressive result for us; user privacy and First Amendment freedoms are core values at DreamHost.

HD: In addition to that win, what have been your biggest successes so far as a GC?

CG: The Department of Justice win was a milestone event in my career. But, I’m most proud of the way our legal team has effectuated change and harmony throughout the company. Colleagues who hear the word ‘legal’ no longer fill the office air with angry expletives; instead, they welcome our team and work alongside us to achieve goals faster and with more clarity. The executive team values our input immensely and enjoys the efficiencies we bring to the table. This achievement – bringing forth change that leads to shared visions and growth – is my definition of success.