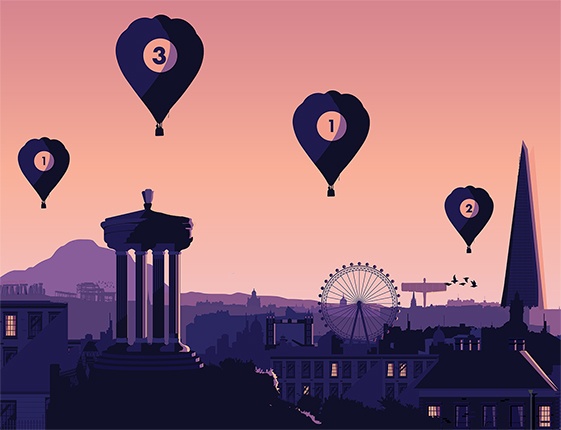 With the submissions deadline for the next Legal 500 UK guide fast approaching, and with lawyers and BD professionals across the country busy crafting their case for a move up the rankings, it seems as good a time as any to look back at the firms that were most successful last time around.

Almost 400 law firms secured one or more moves up the UK rankings last year, while more than 300 were persuasive enough to get a foot on the ladder and get their practice ranked for the first time.

But who made the biggest impact? One firm stands out about the pack with the most new additions to the UK guide – Shoosmiths, which achieved eight new rankings in the most recent guide.

This recognition was primarily a result of the firm’s continued growth in Leeds, where it launched an office in early 2017 with the hire of two employment partners from Yorkshire firm Gordons.

In the three years since, the base has rapidly expanded, and now boasts 18 partners and 43 other non-partners across a range of practice areas. This growth was recognised by the firm’s addition to the rankings for fraud, professional negligence, construction, and property litigation in the Yorkshire & Humber section, and the firm also joined the Sheffield commercial property rankings after moving into new premises in the city in early 2019.

Shoosmiths CEO Simon Boss told fivehundred: ‘We’re really delighted that we did so well in last year’s rankings – this is a reflection of our ongoing investments in our people and our firm as a whole. Attracting and retaining the right talent, with deep legal expertise, helps us to continue to deliver a superb client experience.

‘The Leeds office, led by Matthew Howarth, is a great example of this, and is becoming a real powerhouse in the region – even more impressive given the relatively short amount of time we’ve been in the city.’

When looking at the firms that most successfully argued their case to be moved up the rankings, Shoosmiths also came out on top, securing 17 moves up across the UK guide, including a new entry in the top tier in the Thames Valley commercial litigation rankings, where the firm is carving out a strong niche for public procurement disputes.

In London, a clutch of five firms were among the most successful, all securing four new rankings this year – Burges Salmon, Clyde & Co, Macfarlanes, and US duo Gibson Dunn & Crutcher and Covington & Burling.

Gibson Dunn was another firm to benefit from targeted lateral recruitment, with its new rankings in the London oil and gas, corporate tax, and public international law sections driven in part by heavyweight hires from Allen & Overy, Herbert Smith Freehills, and Mayer Brown, including highly regarded energy partner Anna Howell.

The firms making the most progress in the capital are led by Burges Salmon, which continues to present a credible case as to how its London team works in tandem with its market-leading Bristol base. The firm this year moved up in 13 London rankings, including an elevation to tier 1 in agriculture and estates.

Other strong performers in London include Mishcon de Reya, which moved up in nine London rankings, making it to the top tier for immigration, personal tax, and commercial property: retail. Pinsents also added two new top-tier rankings among nine moves up in the London guide, making it to the highest rank for both VAT and indirect tax and insurance: insolvency and restructuring.

One of the most significant changes for the next UK guide is the introduction of a new industry focus section, which will rank the firms providing a full service to clients in six key sectors – emerging markets; energy and infrastructure; hospitality and leisure; life sciences and healthcare; retail and consumer; and TMT.

Other new categories for London this year include fund finance, international business reorganisations, and a newly divided commercial litigation section which will rank premium and mid-firms separately.

New rankings always present new questions, and we’re fielding plenty already; you can find many of the answers you’ll need on legal500.com, but please do get in touch if there’s anything you need to know – and best of luck with crafting those new submissions.