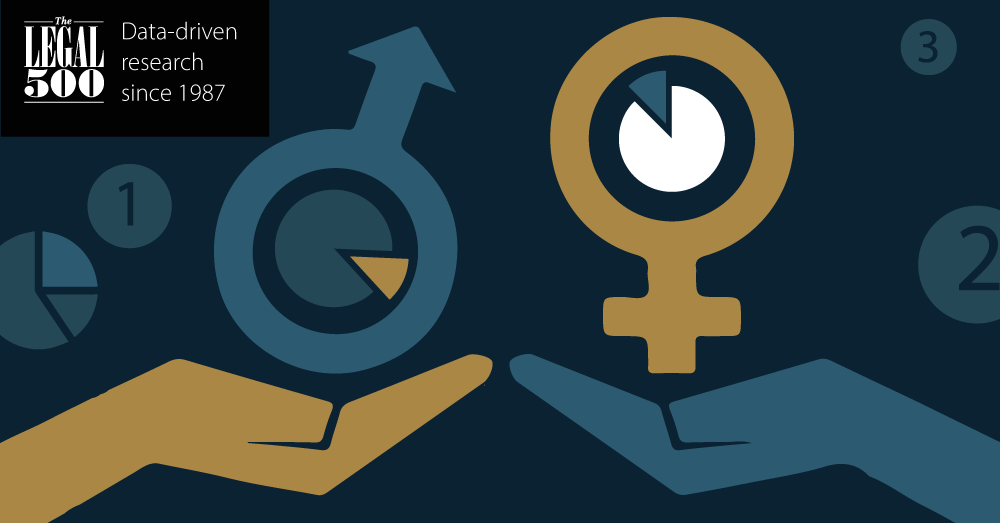 The Legal 500 Deutschland guide published in mid-January, shortly after The Legal 500 editors Georgina Stanley and Ben Wheway took an in-depth look at gender diversity within the latest London rankings. Over the past years, for the UK and Deutschland research, we have explicitly been encouraging firms to include women in their submission forms, while simultaneously urging our researchers to look out for talented women who should be recognised in our rankings. With the London rankings showing significant progress in this regard, I sat down to calculate the numbers in the 2021 Deutschland guide.

Overall figures
The overall figures were disappointing, reflecting the larger structural issues within the German legal market, as many others: Out of a total of 437 lawyers achieving a listing as Leading Individual in the latest guide, only 63 are women. In percentage terms, this equates to women making up only 13% of Germany’s most recognised private practice legal experts.

Our second category for individuals lists the lawyers on their way to achieving Leading Individual status – Next Generation Partners, who generally have five years or fewer at partner level. In the 2021 Deutschland edition we rank 134 Next Generation Partners, of which 34 are women. While 25% is a step up from the 13% in our Leading Individuals category, it could be better and in part reflects the still shockingly low number of women being promoted to partners in firms across Germany.

A bigger jump is visible once we examine our Rising Star category, which was first introduced in 2020 to recognise associate-level lawyers who frequently appear on significant matters and have made major contributions to practices. Albeit a relatively new addition to the guide, with 47% female representation in our Rising Stars category, the gender divide here is almost equal: We list 32 women and 36 men.

The closer parity here reflects the growing diversity of the German legal profession in recent years. Studies by the Soldan Institut in its Statistical Yearbook of the Legal Profession show that, since 2017, more women than men have successfully finished law degrees in Germany, and at large firms across the country the percentage of female versus male junior associates is almost equal.

In that sense, we have come a long way since the very first woman, Maria Otto, was admitted to the German bar in 1922. Yet when it comes to partner promotions, these figures remain dramatically lower.

Rather than becoming partners at law firms, many women choose to go in-house or pursue a judiciary career, (although here too men continue to dominate at the top).

Addressing the reasons behind this would require a separate analysis and article, but inadequate flexibility around family planning and working hours is certainly a key factor.

Company childcare services, flexible working hours and appropriate payment and support for women are essential but still not sufficiently implemented. On top of the work/life balance and gender pay gap issues there is also the glass ceiling effect, with women largely not yet part of the upper echelon of the profession.

According to 2020 statistics released by the German Federal Bar Association (Bundesrechtsanwaltskammer, BRAK), while the proportion of women in the legal profession in Germany has been rising steadily over the past decades and is now at 35.56% (versus only 4.52% in 1970)more than half (55.72%) of in-house lawyers are women. Looking at those with dual qualifications in private practice and in-house law, women make up 44.28%, however, when it comes to lawyers working at law firms women make up only 34%, a number that has climbed only marginally in the last two years.

Looking at some firms
So let’s take a look at some individual firms in our latest rankings. Are there particular firms that fared better than others in terms of the number of ranked women in The Legal 500 Deutschland guide?

Hogan Lovells and Noerr both have the highest number of female ranked lawyers in the guide, with nine ranked women each.

Of course, without looking at this figure in the context of the firms’ total number of ranked individuals, this number doesn’t reveal a lot, and only by doing so the disparity become clear.

With 34 ranked individuals in total, Hogan Lovells has in fact achieved the overall highest number of ranked lawyers in the 2021 edition, with the nine women therefore equating to a female representation of only 26%.

Noerr has overall also done very well and achieved a total of 27 ranked individuals, which means its percentage of ranked women is slightly higher than Hogan Lovells’ at 33%. Four out of the nine ranked women are Leading Individuals, two are Next Generation Partners and three are Rising Stars.

Going beyond our own rankings, let’s put these figures into the broader context of the overall proportion of women at those two firms. According to 2020 data by azur, JUVE’s career portal for young lawyers, and 2018 data by German legal magazine LTO respectively, 36.7% of lawyers at Noerr are women, with this figure stnding at only 13% at partner level. With 41.9% Hogan Lovells has a higher percentage of women than most large firms in Germany, but this number drops to 17% at partner level.

Based on the same data, at CMS, Germany’s largest firm by head-count, 35.1% are women, 14% at partner level. In our current The Legal 500 Deutschland guide, nine out of 29 ranked individuals at CMS are women, which is a female representation of 21%.

In short, all these figures show not only that the number of women compared to men at firms is low, but also that there is still a significant discrepancy between the number of women at the firms and the number of women appearing in our rankings. This is an indication of the additional work our research team need to undertake, together with law firms, in order to boost female representation within our individual rankings

Looking at some practice areas

There is also some disparity between practice areas, with studies by JUVE, among others, showing higher proportions of female practitioners in some practices versus others. This too can be observed in our Deutschland rankings. There are still several practice areas with not a single woman within our ranked individuals. These are our Financial Services Regulatory, Tax, Insolvency and Insurance Litigation ranking tables, as well as our Compliance and Venture Capital sections.

Time for some better news: One particular practice area stands out positively from the rest. In our Foreign Trade Law table (first introduced as separate ranking category in our 2020 edition), three out of five Leading Individuals are women, both listed Next Generation Partners are women, and one out of the two Rising Stars is a woman. With a ratio of six out of nine listed lawyers, women dominate this relatively new ranking table.

Our Arbitration rankings are worth a mention too: In total, nine out of the 19 listed lawyers are women, having achieved an almost even ratio across the three categories: six out of 14 Leading Individuals, two out of three Next Generation Partners and one out of two Rising Stars. This aligns with studies which have shown that Dispute Resolution practices have one of the highest quotas of female partners compared with other practice areas.

A promising category for a future closing of the gender divide may also be our Environment and Planning table, due to its strong female representation at Next Generation Partner and Rising Star level. Two out of five Next Generation Partners are women, and so are all three listed Rising Stars. However, with no women included in the 13 Leading Individuals there is still a huge deficit to overcome.

The crux of the matter

At the crux of the problem is the lack of women being promoted to partner in Germany. Among JUVE’s top 50 firms in Germany, the percentage of women promoted to equity partner in 2019 stood at 20%. In 2019, German legal magazine LTO looked at the ten largest firms in Germany and reported a total of fifty equity partner promotions, of which only six were women. The previous year it was ten women among 37 new partners. In 2020 no new report was released by LTO but instead an article titled, “Nothing is happening”, which discusses the stagnating numbers. There was nothing new to report, because numbers are not improving.

In fact, most recently, the Covid-19 outbreak has raised fears that gender equality goals might take another blow, including in the legal sector. Research already suggests that the pandemic is widening the gender gap with women taking on the bulk of childcare and home-schooling tasks.

Studies by JUVE have shown that British firms in Germany have managed to improve the percentage of women promoted to partner level, which reflects the more widespread discussions around diversity and more prominent push to close the gender gap in the UK. Global and German firms lag behind.

We will continue to take notice of women to be included in our tables; we will monitor female representation on a yearly basis; and we will ensure that our Rising Stars and Next Generation Partners indeed move through the rankings, while adhering to our merit-based research.

At the same time, we need you to enhance women’s visibility within your firms and to tell us about the women in your teams within your submissions. We need you need to recognise and promote talent; and we need you to make sure women have the same opportunities as men in terms of their legal careers at your firm.

By working together we can ensure we better reflect the increasing diversity within law firms in Germany and, in so doing, demonstrate to a younger generation that, like those in our rankings, they too can break through the glass ceiling.