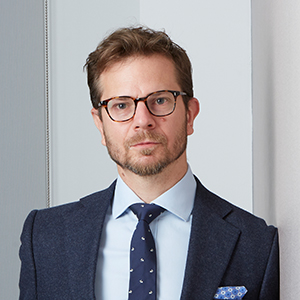 Alex is a Partner whose practice tends to involve commercial legal work in IP-centric businesses, such as licensing, gaming, egaming, franchising and publishing. He is also known for his work within the art world, within which he advises galleries, auction houses and the artists themselves.

He has a deep knowledge of advertising and marketing and he leads the firm’s advertising & marketing practice, providing advice to both agencies and brands directly.  Recently such work has included increasing amounts of affiliate marketing and work a lot of work with influencers, and influencer agencies – as well as promotional advice, drafting ISBA compliant agency agreements, production agreements, sponsorship agreements, and advice more generally on ASA complaints and compliance.

His work is often international and until recently he was the National Representative for the United Kingdom within AIJA, an international network of lawyers with over 4000 members from 90 jurisdictions.

Alex has worked on secondment in-house a number of times, working closely with Universal Pictures, the Telegraph Media Group and the BBC, so he has a good understanding of what in-house lawyers expect and how they prefer to work.

Alex has won significant acclaim for his expertise in legal rankings. He is “recommended for transactional trade mark work and advertising and marketing deals” by Legal 500 2021. He was recently praised by clients within World Trademark Review’s WTR 1000 for 2021, who also recommended him for transactions, and said that clients reported he was “solutions focused, responsive, pragmatic and knows the market”.

‘Media heavyweight‘ Mark Stephens co-heads the broad media & entertainment practice at Howard Kennedy LLP, where he focuses his expertise on international and regulatory matters. Robert Lands leads alongside Stephens and is a specialist on the intersection of IP and data protection as they pertain to the creative industries. The firm’s advertising offering is spearheaded by Alex Watt who advises companies on licensing, franchising, publishing, and various forms of gaming. On the contentious side, particularly for her work on matters pertaining to reputation management, privacy, data protection, and freedom of speech, Elizabeth Morley is a key contact at the firm.

Led by Mark Stephens the skilled team at Howard Kennedy LLP advises museums, galleries, dealers and public art organisations on a vast array of issues relating to the resolution of disputes and the recovery of stolen and looted items of art and cultural property. It also advises many charities, artists and estates as well as photographers, photo libraries and ultra-high-net-worth individuals on a whole host of issues. Daniel McClean is recommended; Alex Watt has an eclectic mix of clients including Middle Eastern art galleries and American art dealers; Elizabeth Morley is well-regarded; and Robert Lands has a particular focus on the visual arts sector.