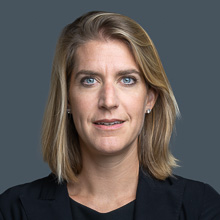 Melissa Magliana is a partner at LALIVE specializing in international commercial arbitration.

With experience in both common and civil law jurisdictions and holding legal degrees in US and Swiss law, she advises and represents clients in ad hoc and institutional arbitration proceedings under all major rules of arbitration. She also acts as sole arbitrator, co-arbitrator and as chair of arbitral tribunals and advises on other forms of dispute resolution and related proceedings, such as mediation and international legal assistance. Her expertise spans different sectors, including the construction, transportation, pharma and mining industries, with a particular focus on works contracts as well as shareholder, partnership and joint venture disputes arising in a post-M&A and construction projects context.

Melissa Magliana is a member of the Executive Committee of the Arbitration Court of the Swiss Arbitration Centre, where she acts as Secretary to the Court. She is also a member of the board of the Swiss Arbitration Association (ASA), for which she acts as co-chair of the ASA Practice Building Seminar. She previously served as a co-chair of ASA below 40 and as a Steering Committee member of Young ArbitralWomen Practitioners. She is a frequent speaker and publishes regularly on matters relating to international dispute resolution.