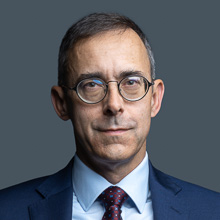 Matthias Scherer specializes in international litigation and arbitration, and commercial contracts, advising corporate and private clients as well as State parties. For many years, he has featured in the International Who’s Who of Commercial Arbitration and of Construction Lawyers, and has been ranked by Chambers & Partners. In 2006, he was selected as one of the “45 leading arbitrators under 45” by GAR (Global Arbitration Review) and in 2014, he entered Chambers’ global-wide ranking of international arbitration counsel, which includes a select group of only 80 lawyers worldwide. In 2021 he was designated by Switzerland to the ICSID Panel of Arbitrators. He has acted as counsel in more than 200 arbitration and ADR proceedings under various rules (ICC, ICSID, Swiss Rules, LCIA, UNCITRAL, VIAC, CAS/TAS, Stockholm Chamber, etc.), including in ICC ADR and pre-arbitral referee proceedings, and subject to both civil and common law procedural and substantive laws. He is regularly appointed as arbitrator by parties and major arbitration institutions (ICC, Swiss Chambers, ICSID, LCIA, Stockholm Chamber of Commerce, Dubai International Arbitration Centre, VIAC, Permanent Court of Arbitration (PCA), the Netherlands Arbitration Institute (NAI), the Danish Institute of Arbitration). He frequently represents parties in arbitral matters before the Swiss Supreme Court. Matthias Scherer is experienced in contracts disputes involving most aspects of commercial transactions, with a particular emphasis on joint ventures, shareholders, M&A, energy, construction and engineering, distribution and State-investor disputes. He is also member of the Disciplinary Commission of the Gymnastics Ethics Foundation, and previously of the Disciplinary Commission of the Fédération Internationale de Gymnastique (FIG).

He is a frequent speaker on international disputes at conferences and has published extensively in this field. He is the editor-in-chief of the journal of the Swiss Arbitration Association, the ASA Bulletin and the Swiss correspondent for construction and engineering matters for the International Law Office, a web-based legal newsletter.