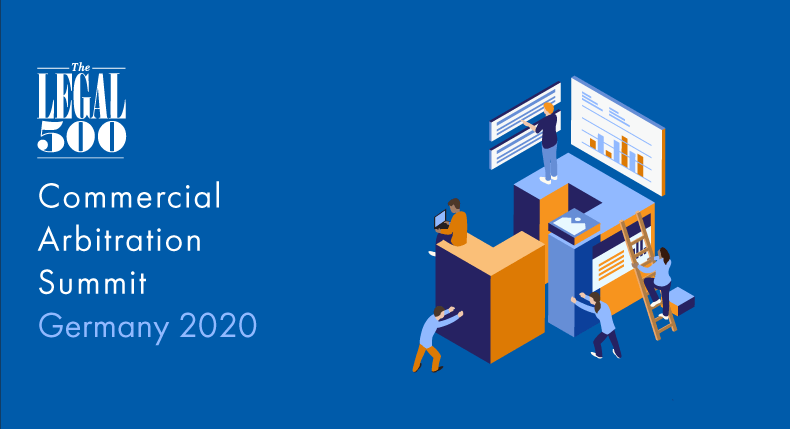 Undoubtedly arbitration remains an attractive choice for dispute resolution in Germany, and the country is steadily gaining in importance as a place for arbitration. In fact, the current 2018 DIS rules have been drafted with the goal of attracting more international cases. Currently approximately one-third of international arbitrations at the DIS are done in English.

With this in mind, over the past few months a steering committee made up of leading GCs in Germany has been brainstorming the most relevant topics in the German dispute resolution market today. Focusing in particular on arbitration, the committee members have been putting their heads together and have been asking themselves: Does arbitration deliver? What are some of the strategic rationales for initiating arbitration? What about document production for arbitration proceedings in the digital age, or lessons learnt from M&A disputes in arbitration? On 12 February 2020 The Legal 500 Commercial Arbitration Summit Germany is taking place in Jumeriah Frankfurt and will address these questions and many others.

Anna joined the The Legal 500 in 2012 as a researcher/writer for The Legal 500 Deutschland. After researching various practice areas not only in the German but also the US, EMEA and Latin American legal markets – making use of her bilingual German and English as well as advanced Spanish language skills –, she acted as Deputy Editor on the Legal 500 Deutschland for a year before being promoted to Editor of the German-language guide in 2015. Anna has spent a considerable amount of her time visiting firms and gaining extensive market knowledge across all major cities in Germany. Before her career at The Legal 500, she spent some years in academic research: After an initial degree in Anthropology, she continued her academic studies with an MA in Spanish, Portuguese and Latin American Cultural Studies and an MSc in Migration, Mobility and Development. At the same time, she completed internships at NGOs and an international think tank, and worked as a market and policy researcher for a research centre specialising in Japanese clients.

Hans David Hahn is an international commercial lawyer working for French-owned nuclear energy company AREVA, which specializes in the construction of nuclear power plants. Educated and trained in Germany and England, Hahn has nine years’ experience working in an international surrounding, including in management and leadership positions. His main area of work currently evolves around contract bidding, drafting and negotiation, which is accompanied by the respective claim management and dispute resolution towards customers, suppliers and business partners (consortium/JV). He has dealt with overarching issues of competition and anti-trust law and has well founded knowledge in questions of IP and liability law, and has a special interest in international commercial arbitration.

He previously practised international arbitration, litigation, and competition law with international law firms in Zurich and New York. His practice focused on complex construction, engineering, and projects disputes, as well as arbitrations in the pharmaceutical and biotechnology sector, and involving distribution and licensing agreements. From 2016-2018, James was Deputy Secretary-General and Head of Case Management at the German Arbitration Institute (DIS), where he supervised hundreds of arbitration and ADR proceedings and served on the drafting committee for the revised 2018 DIS Arbitration Rules.

He advises both the food & agricultural processing activities in the EMEA region and the global commodity trading units in all areas of commercial law (incl. M&A and joint venture activities), but with a special focus on dispute resolution, particularly commercial arbitration.

He studied law at the universities of Hamburg (Germany) and Norwich (England) with a focus on international business law. He is admitted to the German bar and has extensive knowledge of and experience in the food, agri-processing and mineral oil industry and the maritime and commodity business, both from the legal and commercial perspective, all of which he has gained through various positions at a major international oil company, a specialized transportation finance bank, a major liner shipping company and law firms in Germany, England and the United States.

He also acts regularly as arbitrator in international commercial disputes under the auspices of various arbitration institutions.

Miranda Mako is a quadri-lingual (English, German, French, Hungarian) dual-qualified lawyer (England & Wales and New York) with over five years of expertise in both civil and common law. She is a legal counsel for Mondi Group, a global leader in packaging and paper with around 26,000 employees and operations across more than 30 countries. Miranda is a member of a team of legal specialists responsible for engineered materials and consumer flexibles. Miranda is an advisor on cross-border transactions, R&D projects, dispute resolution (arbitration/litigation), data privacy and competition compliance matters.

Tim is an alumnus of the London School of International Arbitration at Queen Mary University of London, a lecturer at Frankfurt University for arbitral law, and a member of the SIAC Users Council Germany. He is a co-author for the Kluwer Arbitration Smart Charts, Country Reports for Germany (since July 2010), and a frequent speaker about arbitration-related topics.

Noerr stands for excellence and an entrepreneurial approach. With highly experienced teams of strong characters, Noerr devises and implements solutions for the most complex and sophisti-cated legal challenges. United by a set of shared values, the firm’s 500+ professionals are driven by one goal: our client’s success.

Listed groups and multinational companies, large and medium-sized family businesses as well as financial institutions and international investors all call on the firm.

As one of the leading European law firms, Noerr is also internationally renowned with offices in eleven countries and a global network of top-ranked ‘best friends’ law firms. In addition, Noerr is the exclusive member firm in Germany for Lex Mundi, the world’s leading network of independent law firms with in-depth experience in 100+ countries worldwide.

We combine many years of experience in leading international law firms, in a globally operating energy company and as arbitrators. We successfully represented companies, governments, and individuals in numerous disputes in state courts, arbitrations, as well as in contract and settlement negotiations.

We focus on our clients’ business needs. We are committed to our clients’ case and fight relentlessly for their interests. We combine high-end legal advice and advocacy with a pragmatic approach. We know from experience that the quality of advocacy can make a decisive difference in complex disputes.

Busse Disputes Rechtsanwaltsgesellschaft mbH represents companies in arbitration. The firm’s 14-strong team combines the quality and abilities of a first-class international law firm with the personal approach and freedom from conflicts one expects from a boutique. All founding members of Busse Disputes come from an international law firm within the so-called “Magic Circle” – cumulatively they have approximately 80 years of international law firm experience. Name Partner Daniel Busse built the dispute resolution group of the respective law firm in Germany and led the practice for more than eight years. He is listed within the absolute top group of leading German arbitration practitioners in all legal directories. Busse Disputes is specialised in international proceedings and has a particular focus in disputes stemming from the energy, corporate/M&A and construction/infrastructure sectors. The team has extensive experience with arbitrations conducted under all of the leading institutional rules including, for example, the ICC, ICSID, DIS, LCIA and SIAC rules.