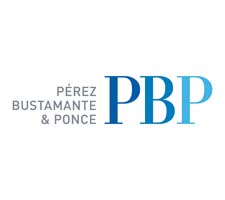 David specializes in the corporate, banking and insurance areas, with a focus on regulatory and due diligence matters. He has worked on mergers and is experienced in registration processes for foreign reinsurers and intermediaries.

In the banking and finance area, he has participated in foreign loan financing involving perfecting security and asset review, registration with the appropriate regulatory agencies for deductibility purposes, and assessment of non-financial specialized funding institutions.

Pérez Bustamante & Ponce asserts its standing as a leader with regard to banking and finance work, with an international and domestic client roster featuring major financial banks and foreign investors. The team, which is led by Bruno Pineda, works out of Quito and Guayaquil, and has experience dealing with the full spectrum of financing modes, including complex loans, multilateral lending agreements and sovereign debt deals. Recent matters saw the team advise Banco Pichincha on the first securitization issued by an Ecuadorian bank to be purchased by a foreign segregated portfolio company (SPC). In a cross-border context, the firm also acted for Dutch investment agency FMO in a transaction with Produbanco, handling the drafting of a subordinated facility agreement. Associate support is provided by Ricardo Pérez and David Noel. Moreover, the team was significantly strengthened with the arrival of Pablo Ortiz (who undertakes banking, finance and insurance matters as part of his wider practice), formerly Ecuador’s ambassador in Belgium and the European Union; and of senior associate Juan Francisco Simone (financial law, fintech, payment systems, ‘insurtech’ and capital markets), who joined from his role as Advisor to the National Assembly of Ecuador in November 2021.