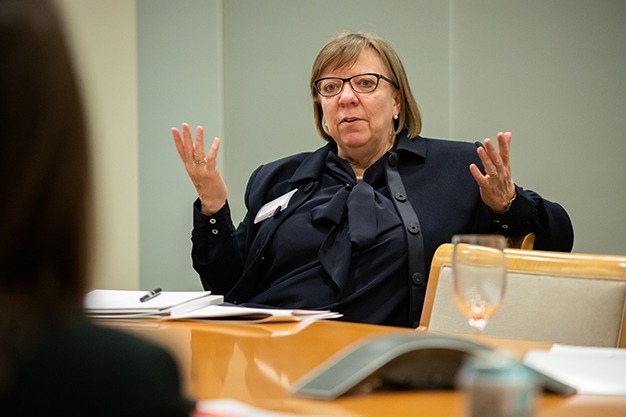 It’s no secret that crisis management has increasingly become a significant part of the modern general counsel’s remit. But with a modern remit, comes modern issues – and new strategies required to manage crises when they inevitably emerge.

That sentiment was the motivation for hosting the first of GC magazine’s Crisis Management Workshops, held in partnership with Linklaters. Hosted at the firm’s New York offices, the interactive workshop was the first of three scheduled to be held in 2019, and brought together a selection of prominent GCs, as well as crisis management experts from Linklaters, for an evening equal parts enjoyable and educational.

Eschewing traditional workshops more reminiscent of a university lecture, the event made interactivity and shared learning a priority for all in attendance. The GCs were broken into two groups, with each joined by a partner from Linklaters to play the role of external adviser, as the two groups worked their way through a mock crisis scenario with a developing set of facts.

‘During this event, people were learning – not just from us – but from each other. They were genuinely taking things away,’ says Alison Saunders, dispute resolution partner at Linklaters and former director of public prosecution in England and Wales.

‘For me the biggest thing was making sure that people had help and had thought about crisis before the crisis actually happened: making sure that they had plans – which I’m not sure necessarily everybody had.’

Bringing together GCs from across a range of industries, then having them scenario plan for a crisis from an industry in which none had prior experience, presented the opportunity for GCs to take a step back and consider their actions from a completely different perspective. Those different backgrounds, too, were on full display – characterising the diverse approaches that GCs employed as the crisis developed – facilitating lively debate and the chance to share best practice.

‘The fact that the GCs were able to talk to each other really helped increase everyone’s learning. They all had different experiences of crisis: some larger; some smaller; some that had been handled well and some not so well,’ explains Matt Axelrod, dispute resolution partner at Linklaters and former senior official at the US Department of Justice.

‘Their interaction led to the surfacing of a number of key crisis management concepts – the need to notify their board; to put in a crisis team very quickly; to have regular meetings or calls so that everyone stays well-coordinated; and to seek advice from all sorts of people. The GCs mentioned how they pay close attention to things that sometimes may look like small or isolated incidents, because these could mushroom. It’s easier to fix a small problem than a big one!’

One of the key themes to emerge during the discussions, was the importance of getting GCs involved in a crisis from the get go. While the approach and methodologies employed by GCs (and their companies) during times of crisis understandably differ – one thing all GCs thought important was making sure that they had a seat at the table from the outset and ensuring that their involvement was part of the operation playbook at their company.

‘Often, GC’s are not necessarily always as plugged in as they should be right in the beginning because they’re actually quite important people to get involved in a crisis. When a crisis hits, the earlier that you get the right people involved, the better,’ says Saunders.

‘Although you need to know what you’re dealing with initially, you don’t need wait until you’ve done a full investigation before you get somebody involved. That’s far too late.’

The first 72 hours of a crisis are often crucial and GCs play an instrumental role in guiding their organisations when managing a crisis. During the workshop, a number of challenges and concerns were raised by those who had experienced crisis first-hand.

But every crisis is different – and it’s all too easy to rest on one’s laurels after successfully navigating past crises.

Following the breakout sessions, the two groups were brought together to discuss their experiences and recommendations over dinner. Reflecting on the workshop, the following were the consensus ideas that the GCs in attendance agreed were critical to consider when advising senior management in times of crisis: