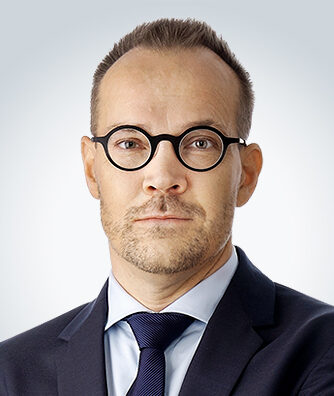 Christian Karhula Lauridsen is a specialist in complex litigation and other contentious matters.

According to international ranking firms, Christian is considered by clients to be “top-notch for complicated issues” and a “strategic mastermind“. Sources say that he is “extremely analytical and straightforward” and “particularly strong on complex investigations, where every stone needs to be turned“. He “thinks outside the box“, “has great business acumen“, and “is brilliant, always convincing, and extremely impressive in the courtroom“. (Chambers and Legal 500)

In his early career, Christian was involved in a broad range of litigation matters and investigations ranging from the Supreme Court case concerning the compatibility of the Danish membership of EU with the Danish constitution, the arbitration cases regarding the construction of the Great Belt Bridge (the third longest suspension bridge in the World), and the comprehensive investigation in the Faroese banking case involving examination of more than 70 politicians, public servants and businesspeople, to a number of important EU cases regarding parallel import and registration of pharmaceuticals.

According to Chambers, Christian is “one of the best competition practitioners in the market“. He has extensive experience in complex competition law investigations and litigation matters, as evidenced most recently by his victory in the more than 15-year long excessive pricing case for Ørsted – the largest and most significant competition law complex of cases ever in Denmark. He succeeded in having the relevant decisions from the Danish Competition Council, the Danish Competition Appeals Tribunal and the Danish Maritime and Commercial High Court overturned in their entirety; the first time this was achieved where it was not due to a preliminary ruling from the ECJ.

He also represented Danfoss in the largest ever cartel related damages case complex in Denmark and was the first to file negative declaratory actions (“torpedoes”), which had not previously been used in Denmark in competition related cases. He has also represented other Danish companies in some of the largest ever EU cartel cases involving Danish companies. Christian and his colleagues in Plesner are the only ones in Denmark having practical experience with both the European Commission’s leniency programme and settlement procedure.

Christian is part of a team which functions through a conscious notion of genuine team work. The team includes two economists and the former President of the General Court of the European Union, Bo Vesterdorf, who has unique and vast experience in international and EU cases.

Christian has a combined Master of Laws (LL.M.) from the University of Copenhagen and Katholieke Universiteit Leuven as well as a Master of Laws (LL.M.) in competition law, EU law and IP law from the University of Cambridge (Jesus College). He was seconded to work at the group secretariat of Carlsberg and has been an associated professor at Copenhagen Business School. Christian is the chairman of the Danish Competition Law Society.

Noted for its cross-border expertise, Plesner has a strong track record in EU cartel cases and follow-on damages actions in multiple jurisdictions. The EU and competition law team includes public procurement law specialists and is regularly instructed by contracting authorities and tenderers. Led by Gitte Holtsø, the group has specific expertise in abuse of dominance cases and vertical and horizontal cooperation agreements, and has strong contentious capabilities; Daniel Barry and Christian Karhula Lauridsen are the names to note. Rie Paving Mortensen is recommended for handling complex mergers.