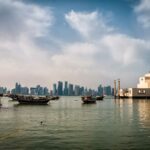 END_OF_DOCUMENT_TOKEN_TO_BE_REPLACED

Qatar has experienced a challenging few years since other Arab countries placed an embargo on the country in 2017 over alleged links to terrorist groups. The situation has caused the country to look further afield for trading partners, with major deals recently being done with Turkey and Malaysia. Its booming construction sector, valued at $75bn, has also kept the economy steadily moving, with many projects related to Doha hosting the FIFA 2022 World Cup.

The World Cup is just one example of the country’s many efforts to diversify its economy and become less reliant on its finite oil and gas reserves. Major investments have been made in technology, healthcare, transport, tourism and sports. Moreover, the state owns brands that are well known outside of the country, such as its flagship airline Qatar Airways and French football team Paris Saint-Germain.