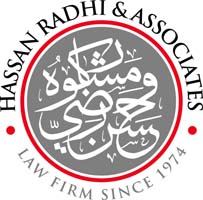 The firm: Dr Hassan Ali Radhi founded the office in 1974, under the name ‘Hassan Radhi Law Office-Attorneys and Legal Consultants’. At that time, the office had only one advocate, Dr Hassan Radhi himself. In the beginning, the office’s activities were purely local in nature but soon began to cross international borders in view of the need to open new professional and geographical horizons for the office. Shortly thereafter the office’s clients began to soar, and the office had the opportunity to benefit from the experience of international foreign firms located in Bahrain. Therefore, Hassan Radhi Law Office associated itself with the renowned US legal firm at that time, Coudert Brothers, and both established an international business firm in the name of ‘Coudert Brothers in Association with Hassan Radhi’. This office is specialised in business activities of international nature and multi-laws. The association continued for nearly eight years.

The office capitalized on the accumulated experience gained by it in international business, expanded, and soon began to specialize in commercial laws, particularly banking and insurance, using the English language as the main language for business in these areas. Expansion and development have continued ever since, and the office has not looked back. Within a few years, Hassan Radhi Law Office topped the list of the most reputable and leading law firms in Bahrain and in the Gulf region.

Office partners: With the addition of partners, the office changed its name to ‘Hassan Radhi and Associates-Attorneys and Legal Consultants’ in 1994.

Dr Hassan Ali Radhi, Ms. Noor Hassan Radhi, Mr. Sayed Jaffer Mohamed, Mr. Abdul Jalil Al Aradi, Ms. Noora Janahi, Mr. Sayed Mohsin Al-Alawi, Ms. Fatima AlAli, Mr. Sayed Hassan AlNawah, and Mr. Qassim Alfardan are the firm’s partners. The number of attorneys presently working at the office, including the partners, is 17, apart from the trainee lawyers, paralegals, and articled clerks. From the Bahraini perspective, this is a large number, thus enabling the firm to be a leader in terms of a number of lawyers besides its technical and administrative staff who comprise eight.

Hassan Radhi & Associates renders legal consultancy and advice on all facets of Bahraini laws to national and international clients.

As part of the Lex Mundi global network, we can provide our clients with preferred access to more than 22,000 lawyers around the world – all from a single point of contact.

Arbitration: the firm is extremely strong in arbitration and has rich experience in representing clients before arbitral panels and the firm’s lawyers have acted as arbitrators and are active in domestic and international arbitration. Dr Hassan Ali Radhi is a member of the LCIA Court in the London court of commercial arbitration and is on the panel of arbitrators maintained by the commercial arbitration center for the states of the co-operation council for the Arab States of the Gulf. The six states are the Kingdom of Bahrain, Kingdom of Saudi Arabia, Kuwait, United Arab Emirates, Qatar, and Oman. The GCC Arbitration Centre is situated in Bahrain.

Consultations: the firm’s lawyers render consultation services on every facet of law related to business in Bahrain. The two major languages of consultation are Arabic and English. The official language of Bahrain is Arabic and the presence of bilingual Arabic/English lawyers enhances the firm’s values besides specialized English and Arabic lawyers. The lawyers have been educated at prestigious universities from Bahrain, United Kingdom, France, Canada, Egypt, Kuwait, Morocco, Jordan, and Bangladesh.

Contracts: International clients would like to see documents drafted in English. Any document that needs to be notarized in Bahrain must be in Arabic. The firm excels in the preparation of bilingual Arabic/English contracts in order to cater to both needs. The firm regularly drafts and reviews contracts for clients in English, Arabic, and bilingual.

Legal Referral Guides: Hassan Radhi & Associates has been consistently listed among the top law firms in the region by the world’s largest legal referral guides such as: The Legal 500, Chambers and Partners, IFLR1000, and many others.

Awards: Hassan Radhi & Associates have received a number of prestigious national and international awards, particularly for its achievements in individual areas of law and in different jurisdictions. Some of the accomplishments that enhance the long-standing reputation of the firm immensely can be seen on the firm’s website.

Number of Partners and Associates : 17 Number of Administrative team : 8

GC magazine’s Middle East Regional Insight report represents a deep dive into the legal and business environments of a number of the world’s most important emerging economies. As such, we are proud to have received contributions from some of the most prolific and respected external firms operating in each of the countries covered in the report, and their insights, opinions and experiences constitute a critical ground-level view of the challenges and opportunities faced by lawyers and businesses across the Middle East.