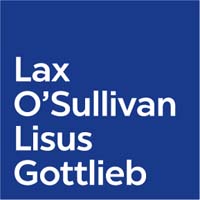 Lax O’Sullivan Lisus Gottlieb LLP is one of Canada’s premier dispute resolution boutiques, and its team houses ‘some of the most creative and tactfully aggressive lawyers in Canada‘. The group frequently represents clients in complex commercial disputes and public law cases at trial, arbitration and appellate courts across the country, and before the Supreme Court of Canada. One of the most significant recent cases for the Toronto-based team saw Rahool Agarwal and practice co-head Jonathan Lisus act as lead counsel to Zydus Pharmaceuticals as defendant in a class action against the world’s leading generic drug makers alleging anti-competitive behaviour, including participating in a price-fixing cartel. Heading the department alongside Lisus is Matthew Gottlieb, ‘one of the top litigators in the country‘. Paul Fruitman is another name to note, whose eclectic practice includes frequently acting for healthcare institutions and professionals in civil and regulatory proceedings. Shaun Laubman is among the firm’s future stars and is particularly active in real estate disputes, an area that is also among the strengths of fellow up-and-coming partner Nadia Campion. Andrew Winton was singled out for praise by clients and had a busy 2021 in insolvency and restructuring, shareholder and employment cases.

‘The team at Lax O’Sullivan Lisus Gottlieb LLP are the best in their field. The are always thoroughly prepared for any hearings, arguments or trials. In my opinion, their professionalism and preparedness makes them always look superior to their opposing council. They always do an amazing job of preparing their witnesses and in drafting their affidavits. Their written submissions are always well researched and professionally packaged.’

‘Matt Gottlieb is a terrific lawyer, highly skilled and strategic. He provides superb service and he is a trusted advisor.’

‘Andrew Winton is a very strong litigator who is client focused.’

‘Matt Gottlieb is one of the top litigators in the country. He understands each case in unique and creates a strategy for every option.’

‘Jonathan Lisus is a standout for his ability to drive cases. Lisus is a hardworking and convincing advocate who isn’t afraid to take on the toughest cases and effectively turn the tables.’

‘The lawyers at LOLG are passionate about what they do. Some of the most creative and tactfully aggressive lawyers in Canada. Ability to drive high settlement numbers through both unique and convincing case theories. LOLG specializes in big litigation.’

‘Shaun Laubman was outstanding and very attentive to our needs.’

‘Matthew Law is the most exceptional lawyer I have ever worked with. He is an extremely talented lawyer who is quick on his feet, a top notch litigator who does an amazing quick study of the issues and a case.’

Lax O’Sullivan Lisus Gottlieb LLP, which is a boutique litigation firm in Toronto, is frequently engaged by leading commercial law firms to act as trial co-counsel in major bankruptcy and insolvency cases. The firm has been taken on for a number of high-profile matters, including the Purdue Pharma and Big Tobacco insolvency cases. It acts for a full range of stakeholders, including debtors, creditors and court monitors. Matthew Gottlieb and Jonathan Lisus co-head the practice.

Lax O’Sullivan Lisus Gottlieb (LOLG) is Canada’s premier counsel firm. The firm’s lawyers handle the most complex commercial disputes and public law cases. They carry a robust trial, arbitration and appellate practice across the country and in the Supreme Court of Canada.

LOLG is regularly engaged as trial and appellate co-counsel by peer law firms, and as court officers in large and sensitive litigation mandates. The firm also acts as counsel in insolvency cases, class actions, securities litigation and administrative law matters, as well as infrastructure, franchise, employment and health law disputes.

LOLG’s practitioners are leaders at the bar, holding positions on the Chief Justice of Ontario’s Advisory Committee on Professionalism and the Supreme Court Advocacy Institute, and fellowships in elite trial organizations. Its associates are of the highest caliber, recruited primarily from judicial clerkships at the Supreme Court of Canada, provincial Courts of Appeal and the Commercial List of the Superior Court of Justice. LOLG’s partners are among the most consistently recommended counsel in Canada and represent clients in Canada, the United States, and from overseas.