MoginRubin LLP's managing partner Daniel Mogin recently advised a proposed class of direct purchasers in its claim against the major airlines and distribution systems on the grounds of their alleged conspiracy to artificially inflate air travel fares. In Washington DC, Jonathan Rubin represented the National ATM Council and independent ATMs alleging Visa and Mastercard charge unlawfully excessive interchange fees. Also recommended is Jennifer Oliver, who was promoted to partner in 2019. Named attorneys are based in San Diego unless otherwise stated.

MoginRubin has represented their clients in hundreds of antitrust and class action cases across multiple industries in federal courts throughout the United States. As such, they often serve as lead or liaison counsel and on steering and executive committees, charged with the overall responsibility for complex federal Multi-District Litigation, California Judicial Council Coordination Proceedings and other complex class, direct and private enforcement actions. The firm is frequently invited by other law firms to participate in litigation or consultations – often as the “lawyers’ lawyers.”

MoginRubin lawyers are dedicated and experienced with deep backgrounds in antitrust law, hailing from premier Am Law 200 law firms and prestigious national litigation boutiques. They understand the nuances of the corporate world, holding advanced degrees in Business, Economics, and Finance and have been lawyers with the Federal Trade Commission, the American Antitrust Institute and other federal and state antitrust enforcement authorities.

The firm offers its clients added value and well-rounded viewpoints through diversity. More than half of the firm’s lawyers and a third of the partnership are women. The firm has continued to emphasize diversity and inclusion as it has grown, allowing it to maximize productivity and creativity in meeting the needs of its clients. MoginRubin remains committed to developing a diverse team as it continues to expand its national footprint.

MoginRubin takes great pride in driving success for their clients. As a specialized boutique firm, they are able to offer strategic perspective, creativity, flexibility, and client relationships that are superior to larger litigation firms. All clients receive the same exceptional standard of service to ensure that their matters achieve the best possible outcomes. Ultimately, the team at MoginRubin understands the real-life implications and pressures of operating in the marketplace, and advocates for its clients as if their businesses were its own.

Creating opportunities and the business strategy of antitrust

The Legal 500 and MoginRubin LLP were thrilled to host a spirited roundtable discussion on the business strategy and potential revenue opportunities of private antitrust litigation. The discussion was attended by GCs from a diverse set of industries and organizations, including a private equity investment firm, a Nasdaq-listed telecoms company, a healthcare data startup, and a real estate development group.

At the heart of this topic is a point of principle summed up in one simple question to get the conversation moving: Are GCs happy to allow the government to shape competition in their market according to their priorities rather than those of market participants? The answer, of course, is ‘no’; however, the real answer is most commonly ‘no, but…’ and addressing what comes after the ‘but…’ quickly became the focus of the conversation.

Retired Supreme Court Justice John Paul Stevens famously stated that private enforcement of antitrust laws ‘was in no sense an afterthought’, but rather ‘an integral part of the congressional plan for protecting competition’. So the question stands, in a world where corporates are making big bucks from affirmative recovery programs, why are GCs hesitant to assert their company’s antitrust rights in the same way they might assert other legal rights? Answers to this question differed depending on who was answering, but most of what was voiced aligned neatly with several misconceptions that MoginRubin was prepared to meet.

The first concern was reputational. What will people think? Will we still be able to get business? Will this damage our brand? These are real concerns and concerns that our firm sponsors acknowledge must be taken seriously. However, MoginRubin reminded us of a cold hard truth highlighted by American academic and economic theorist Michael Porter: like everything else in this life, those who do not confront their competitors will continue to be victimised. That’s all there is to it. There are scenarios in which a company must decide to either assert itself, or be bullied into submission. At the very least, a company might walk away with a reputation as a company that can’t be pushed around.

At that point one attendee built up the nerve to address the real elephant in the room. Let’s talk costs. And that particular concern got people talking, indeed. The perception was that antitrust litigation is prohibitively expensive. But not so fast, say our sponsors. Relative to the recoveries that the good firms can hope to achieve, the costs of private action might be close to negligible. In fact, MoginRubin portrayed private antitrust action as an opportunity to actually create revenue, just like any other tool in a rigorous affirmative recovery program. Our event sponsors nodded knowingly when the issue of cost was raised, but intuitions about costs and benefits shifted when MoginRubin detailed concrete examples of big payouts. After all, is there a GC alive who wouldn’t want to place a multimillion-dollar check on their CEO’s desk?

Toward the end of the conversation the attendees became interested in the extent to which in-house legal teams are providing training in antitrust law and strategy. The general consensus was that antitrust training for in-house legal teams is almost non-existent, at least in any way that would drive revenue or contribute to a wider business strategy. Roundtable participants brainstormed ways to bolster an in-house team’s sensitivity to antitrust concerns and identified at least one simple strategy for shifting from a defensive mindset to a more proactive one.

Thank you very much to all of our in-house participants, and thank you, of course, to MoginRubin for sponsoring what turned out to be a productive and enjoyable roundtable discussion. 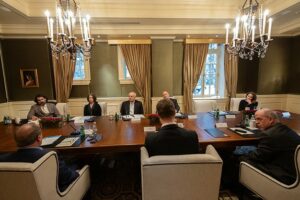 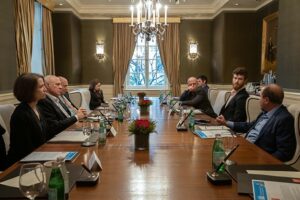 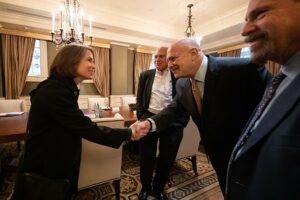 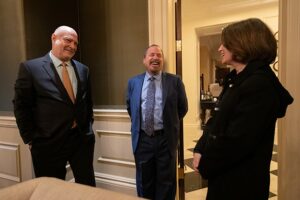