Karim Adel Law Office (the office) is an Egyptian law firm, which was established in 1939 by the late Dr Saba Habashi as a pioneer law office in the field of International Business Law. Dr Saba Habashi was a former judge in the Egyptian courts and he got his Ph.D. from the Sorbonne University in Paris. He was appointed as a minister of trade and industry by King Farouk. As Minister he enacted the first trademark law (law No. 57 of 1939).  Then, he started his work as a private lawyer in 1939 by establishing our office. As he mastered the English and French languages, he was appointed by the largest multinational companies in Egypt such as ARAMCO, Coca Cola and Hilton. In 1947 he was the first Egyptian and, in fact Middle Easterner, to pass the New York Bar Exam in 1947. After the Suez crisis in 1956, he declared his position, that he was against the nationalisation of the Suez Canal and he left Egypt for the USA, while he remained a major partner at this office.

In 1961, after the nationalisation and the start of the socialist era in Egypt, the office came under the management of his partner Mr Adel Kamel. During the Sixties and the early Seventies of the last century, the office suffered a lot under the socialism and political situations of Gamal Abdel Nasser’s regime.

The office suffered a lot to survive, as there was no further foreign direct investment until the enactment of the first incentive for investment law in 1974. However, the office sustained and overcame these difficult times.

The office witnessed a real growth during the years 2000 to 2010 and was modernised in order to be able to offer the best legal services to its clients with international quality standards.

After the revolution of January 2011, the business of the office suffered due to the political and economic situation in Egypt.

Recently, in 2015, Dr Christian Ule, a German attorney admitted in Frankfurt am Main, Germany, since 1995 and admitted before the DIFC Courts in Dubai since 2012, joined the office. Due to Dr Ule’s wide Middle Eastern as well as European expertise, the office started a new wave of modernising its practice and focuses on foreign investors in Egypt.

In brief, since its establishment, the office has offered a full and comprehensive range of legal services in Arabic, English, German, Spanish and French languages to a wide variety of multinational companies and Egyptian entrepreneurs operating in Egypt. These legal services are delivered in a high standard of professional service to its clients. The office is very accustomed to working with other law offices in Egypt and other international law firms, in order to achieve a successful outcome for its clients. The office is a safe and reliable choice for anyone in need of legal assistance, as it has been proven for over 78 years.

CLIENT: Bjoern Albinus, Managing Director
COMPANY/FIRM: PERI Saudi Arabia LLC, Jeddah, K.S.A.
TESTIMONIAL: Gets the job done while being honest, reliable, transparent  a partnership. We got this and more. Karim Adel Law Office really helped us with every topic in Saudi Arabia, Bahrain and Egypt.

CLIENT: Uwe Hohmann, Manging Director
COMPANY/FIRM: TME Services DMCC, Dubai, U.A.E.
TESTIMONIAL: I, Uwe Hohmann (German national, located since 16 years in Dubai) owner and Managing Director of TME Services DMCC (TME) herewith confirm that we often work with Dr. Christian Ule from Cairo. I and my staff very much rely on his expertise especially in all questions of challenging business issues, e.g. M&A, structuring of business groups and important contracts. Furthermore, his excellent skills in cross border business have a special value for my company. He speaks German, English and Arabic and has a professional intercultural background in the whole MENA-Region, Germany and some other countries. We strongly recommend him as highly supporting lawyer. 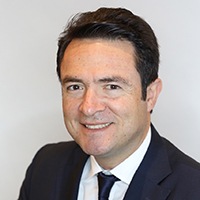 Dr. Christian Ule explains how the firm has developed and expanded its international client base in recent years.

What do you see as the main points that differentiate Karim Adel Law Office from your competitors?

Is technology changing the way you interact with your clients and the services you can provide them?

Are clients looking for stability and strategic direction from their law firms? Where do you see the firm in three years?