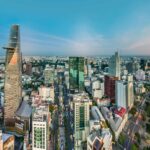 Firms in the Spotlight... VILAF

The firm: With over 27 years of experience in Vietnam, VILAF is one of the largest law firms in Vietnam consistently ranked as a first-tier law firm by well-known legal editorials including The Legal 500, AsiaLaw, Benchmark Litigation, Chambers and Partners, and IFLR1000. View Profile...

ASL Law is a leading full-service Vietnamese law firm made up of experienced  and talented lawyers. Based in both Hanoi and Ho Chi Minh City, the firm’s main purpose is to provide the most practical, efficient and lawful advice to its domestic and international clients. View Profile...

Frasers Law Company (Frasers) was established in 2004 by Mark Fraser. Frasers was the first law firm to be licensed by the Ministry of Justice in Vietnam with a foreign law company licence. Frasers is Vietnam’s premier independent commercial law firm, providing innovative international-standard legal advice and opinions, in a Vietnamese context, on all areas …

END_OF_DOCUMENT_TOKEN_TO_BE_REPLACED

Firms in the Spotlight... DL & Partners

DL & Partners are based in Ho Chi Minh City and have a wide network of associate firms in major cities of Vietnam, including Hanoi, Phan Thiet and Nha Trang. This enables the firm to effectively manage their clients’ matters. The firm have substantial experience representing clients to expand and develop business projects and promote …

END_OF_DOCUMENT_TOKEN_TO_BE_REPLACED

Despite being lauded for its handling of the Covid 19 pandemic in 2020, Vietnam experienced major challenges in 2021, due to the onset of the Delta variant.

Notwithstanding the above, the World Bank still expects Vietnam’s GDP to rise by 4.8% in 2021 and the country remains a buoyant market for international investors. The majority of Vietnam’s inbound investment comes from other Asian jurisdictions, such as South Korea, Japan, Singapore, Taiwan and Hong Kong. One of the key driving factors of the country’s economic growth is its burgeoning middle class, whose increased spending power has driven up activity in the consumer, retail and technology sectors. Fintech is also a particularly lucrative market, due to a high proportion of citizens owning mobile phones, combined with limited access to bank branches.

In terms of the legal market, several international firms are based in the country, including Allen & Overy LLP, Baker McKenzie, Freshfields Bruckhaus Deringer, Hogan Lovells International LLP and Mayer Brown. In addition, the Australian firm Allens has an official alliance with Linklaters. Linklaters and Clifford Chance are two firms that are very active in the market but operate from neighbouring offices in Singapore and Hong Kong. Among the domestic firms, VILAF, YKVN and Frasers Law Company are the three biggest independent firms and regularly act as local counsel on major deals. The market also includes regional law firms with neighboring offices across Southeast Asia, such as Rajah & Tann LCT Lawyers, Tilleke & Gibbins and ZICO Law.