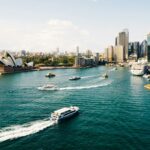 Australia is a land of great natural beauty and boundless opportunity. Despite often turbulent global financial conditions, Australia’s economy continues to be one of the world’s most stable. Sound governance creates certainty for foreign investment and Australia’s skilled workforce, ties to Asia and success in key industries makes Australia a great place for doing business. …

END_OF_DOCUMENT_TOKEN_TO_BE_REPLACED

Firms in the Spotlight... Blackwattle Legal

Blackwattle Legal is a premium, boutique commercial litigation, insolvency and bankruptcy law firm based in Sydney, Australia. We have deep expertise in our two key areas of law, supporting both domestic and international clients and referral firms with high profile, strategically important and complex matters. View Profile...

In general, the Australian market remains an attractive Asia-Pacific hub. Energy, natural resources, and infrastructure projects continue to be some of the key driving forces in the economy and legal market. Australia is contending with complex energy issues such as alternative forms of power and how such power can be transferred onto a grid – especially given the sheer size and the differing landscapes across the world’s sixth-largest country.

Work in the renewables/alternative technologies has, therefore, increased considerably; one lawyer pointed out that this area is so busy, that lawyers in other energy/resources areas are switching their attention. This is reflected in more firms being ranked in this practice area this year.

Transport infrastructure is also continuing at a pace as projects continue to change the landscape of major cities. All of this activity is generating considerable work in other practice areas such as real estate, technology, and corporate. There is also a follow-on effect with litigation or dispute resolution  on the rise as construction projects progress.

In the corporate/commercial realm, firms report few headline-grabbing deals but in the mid-market there is a good, steady flow of deals and secondary raisings – particularly in the area of financial services. Inbound investments from countries such as Japan and China help the market along as do the super funds who are always looking for places to invest.

Many firms are engaged in advising banks regarding their involvement in the Royal Commission into Misconduct in the Banking, Superannuation and Financial Services Industry. However we are told that the inquiry has also had the effect that banks are being more cautious and, therefore, more non-bank lenders are becoming increasingly active in the lending space.

Work in debt and securitisation has increased and there has been an uptick in warehousing transactions. Advice is also being sought regarding green/socially responsible bonds; it is reported that during the first half of 2019 green bond issuances topped A$15bn. There has also been considerable restructuring activity together with some headline insolvencies such as the collapse of Toys R Us and a number of other well-known retailers.

Increasingly high levels of work is being generated in the technology space, especially IT, in both the private and public sectors. Aside from large procurement or outsourcing projects, lawyers are increasingly dealing with the issues around data protection and data breaches/cyber security. The market must also contend with the ever-evolving and increasingly aggressive regulatory regimes. The Australian Competition and Consumer Commission is a key and proactive  consideration here; its Digital Platforms Inquiry is looking at competition in the media, advertising, data protection, and unfair trading areas. This is in addition to its continuing to focus on criminal sanctions against anti-competitive activities.

The trend among lawyers moving firms has continued; a number of the employment and health and safety team at K&L Gates has left to set up a specialist firm, Kingston Reid. HFW has also launched an employment team, members of which joined from Dentons, and as in past years, there has also been a considerable number of individual lawyers making lateral moves.

The major ‘home grown’ and international firms remain; Allens, Ashurst, Clayton Utz, Corrs Chambers Westgarth, Herbert Smith Freehills, King & Wood Mallesons, MinterEllison, and Gilbert + Tobin. Other UK and US firms have a notable presence, examples being Baker McKenzie, Norton Rose Fulbright, DLA Piper, Jones Day, and White & Case LLP. In addition to the above, there is an outstanding range of firms included in the rankings that offer a full service or highly regarded specialisms.