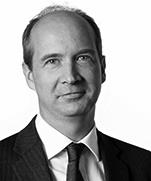 Dominic is an arbitration specialist with particular experience of acting in disputes involving Russian and CIS parties, in London and other European seats.

Dominic is English-qualified but has lived and worked in Paris and Moscow, and is a fluent French and Russian speaker. He acts both as counsel and arbitrator. His work normally focuses on high value disputes under English law-governed contracts, such as shareholder agreements, construction contracts, loans and other financing documentation. These disputes have a strong international element and often require consideration of different systems of law and conflicts of laws.

Dominic is an experienced advocate and cross-examiner and has conducted more than twenty hearings as first chair. His clients come from a variety of industry sectors, including banking and finance, construction, oil and gas, and telecommunications. He has experience in particular of LCIA, ICC and SCC arbitrations, as well as of ad hoc arbitration under UNCITRAL rules. Although his primary focus is on commercial arbitration he has also acted in investment treaty disputes, both as counsel and arbitrator.