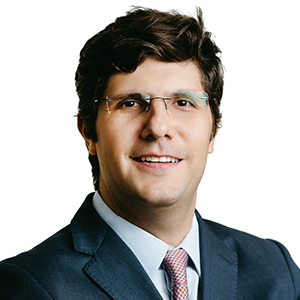 Rodrigo Carvalho is a member of the firm’s corporate department and head of Winston’s Brazilian Affiliate. Rodrigo has extensive transactional experience in Brazil and internationally across a broad spectrum of industries. He advises clients on cross-border M&A, international debt and equity offerings, and finance matters involving Brazil and other parts of Latin America. Rodrigo also supports Winston’s US and international offices on matters relating to Brazil and the region in areas such as antitrust, compliance, disputes, investigations, and sanctions. He previously was Bank of America’s Head of Investment Banking (Legal Division) in Brazil. Rodrigo has worked in New York, London and São Paulo during his legal career. He is admitted both in New York and in Brazil.

Winston & Strawn LLP‘s Latin America group has a substantial emphasis on M&A and private equity. This includes both inbound and outbound transactions. The firm launched a Miami office in May 2022, appointing senior Latin America M&A specialist Enrique Martin (a recruit from Jones Day) as managing partner. The wider team has experienced a further uptick in acquisitions and investments by Latin American businesses in the US, including deals originating from Argentina, Colombia, Brazil, Ecuador and El Salvador. The firm has made a real impact in Brazil deals following the 2021-hire of ‘incredible lawyer’, Rodrigo Carvalho, the former head of investment banking (legal division) at Bank of America in Brazil, who is now based in Sao Paulo. The Latin America team also continues to be at the forefront of private equity investments and funds formation thanks to the presence of Latin America practice group co-head Talbert Navia. It remains noted for its record in Chile, in part due to its connection to Enel Américas, the Santiago based electricity conglomerate. Co-head of the Latin America team Allen Miller

is widely recognised for his record in public M&A for Latin American businesses, including Enel Américas. Kevin Smith is another experienced figure in Latin America M&A and private equity. All named individuals are based in New York unless stated otherwise.

Winston & Strawn LLP continues to impress in complex and headline transactions. It remains at the forefront of future flow securitisations, SEC-registered offerings and inaugural bond offerings, recently advising Nueva Elektra del Milenio and its parent, Grupo Elektra, on a future flow transaction involving remittances from the United States to Mexico. Corporate restructurings are another forte for the team, which represents a number of US-listed Latin American businesses. The group has a particularly strong record in Mexico, Chile and Argentina. It is also well positioned to grow its Brazil capital markets practice following the hire of ‘remarkable corporate lawyer’ Rodrigo Carvalho in April 2021; he was previously Bank of America’s head of investment banking (legal division) in Sao Paulo. Co-head of the Latin America team Allen Miller

is rated for SEC-registered deals, corporate governance engagements and future flow securitisations. Co-head of the group Talbert Navia is noted for bond offerings in Mexico and Argentina. Sey-Hyo Lee  and Claude Serfilippi are also key members of the team. All named individuals are based in New York.

Winston & Strawn LLP‘s central team of Latin America specialists has an impressive standing in banking and finance matters, covering corporate lending, acquisition finance and receivables finance, right through to future flow transactions and warehouse financing structures. It has established connections to Latin American lenders and borrowers, and is growing its presence in Brazil through ‘amazing lawyer‘ Rodrigo Carvalho , who was Bank of America’s head of investment banking (legal division) in Brazil, prior to joining the firm in April 2021. Allen Miller

is noted for his contacts in Chile and Mexico, frequently advising on big-ticket financings and restructurings in those jurisdictions; he is also a leading name in novel securitisation and structured finance transactions. Talbert Navia  is also recognised for acquisition finance and Claude Serfilippi   is another core team member with extensive financing expertise. Following his arrival from Hogan Lovells US LLP, Richard Puttré  played a role in the establishment and launch of the firm’s new Miami office in May 2022, and will bring further project finance experience to the team, especially in renewable energy. All other named individuals are based in New York. Since research concluded, the firm has made an additional heavyweight-hire to the new Miami office, bringing in Carl Fornaris , formerly co-chair of the financial regulatory & compliance group at Greenberg Traurig LLP, where he had spent much of his 30-year career; a former head of legal and compliance for the Latin America region at Barclays Bank, he arrives as co-chair of the firm’s financial services practice – effective July 2022.