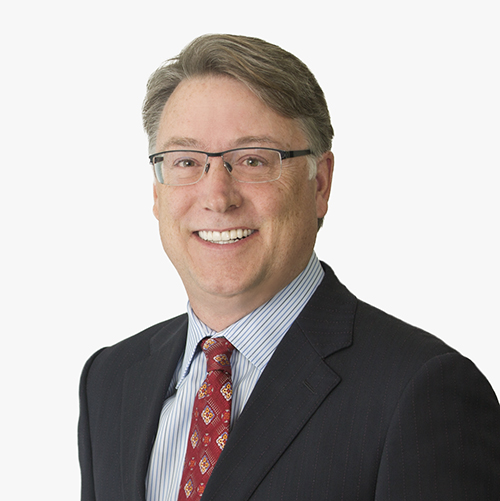 William (Bill) Gaede focuses his practice on intellectual property litigation in the life sciences and medical device industries. Bill serves as lead counsel for a wide range of companies and research institutes and has extensive experience in litigating life science technologies such as antibodies, proteins, small molecules and diagnostics. In addition to his jury trial experience, Bill has argued before the US Circuit Court of Appeals for the Federal Circuit. He further provides risk management guidance on freedom to operate issues.

Bill is head of the Firm’s Global Intellectual Property Practice Group. When he joined the Firm in 2005, his move to McDermott was recognized by American Lawyer, in its feature “Star Laterals of the Year,” as one of the ten most significant lateral moves in the United States.

‘s practice counts several former lawyers from regulatory and enforcement authorities among its ranks, making the group a safe choice when in-depth, comprehensive experience in ITC investigations is needed. Jay Reiziss in Washington DC, who brings to bear his 12 years serving in the Office of the General Counsel, the Office of a former chairman, and the Office of Unfair Import Investigations at the ITC, is the key contact of the group. As part of the firm’s wider patent litigation team, the practice is also adept at handling disputes involving an ITC component and federal court litigation. Chicago’s Charles McMahon is another name to note. William Gaede in Silicon Valley heads the global IP practice group.

has bolstered its broad life sciences team with a number of major lateral hires. Most notable in this is its expansion of the IP team, bringing new California-based practice co-head Douglas Carsten from Wilson Sonsini Goodrich & Rosati, expanding the firm’s litigation bench, which offers trial and arbitration services for patent disputes. Its transactional team has also continued to grow, with growing expertise in licensing and collaborations matters based out of the Chicago, Los Angeles and Atlanta offices. Another core element of the offering is regulatory work, with Washington DC-based co-head Vernessa Pollard advising on clinical research, marketing and post-market compliance. Also noteworthy are Boston-based IP experts Sarah Chapin Columbia and Michael Siekman, and Silicon Valley litigator William Gaede.

has added bench strength to its West Coast capabilities with the arrival of Douglas Carsten; a skilled litigator with a good record in the life sciences IP arena formerly at Wilson Sonsini Goodrich & Rosati. The ‘exceptional team’ has also bolstered its East Coast life sciences practice with the arrival of DC-based partner Adam Burrowbridge, who also joined from Wilson Sonsini Goodrich & Rosati, Silicon Valley’s William Gaede heads the group, which remains a one-stop-shop for clients thanks to its full range of patent litigation expertise, which they put to use not only at state level, but also nationally and globally. Praised for developing ‘innovative solutions’, the practice boasts an excellent reputation in the healthcare, pharmaceuticals and biotechnology space, as evidenced by its client roster, which includes names such as Amgen, Mylan Pharmaceuticals, and United Therapeutics. Sarah Chapin Columbia in Boston; Thomas Steindler, who leads the IP litigation group in Washington, DC; Chicago’s Charles McMahon; Shane Nichols in Atlanta, who holds a degree in electrical engineering; and Mandy Kim in Orange County, who extensive ITC experience, are other key members of the department. Nicole Jantzi and Paul Schoenhard left in January 2022.

‘s practice prepares and prosecutes patent applications and manages and protects the patent portfolios of clients such as Amgen, CRISPR Therapeutics, Facebook, and Shutterstock, showcasing its particular expertise in the life sciences and technology spaces. The prosecution group is headed by Chicago’s Ahsan Shaikh, while William Gaede in Silicon Valley acts as global head of the IP group. Other key attorneys include Boston’s Edward Gordon, who often takes the reins in negotiations in transactions involving IP assets as well as in negotiating joint ventures and strategic collaborations for global companies. Fellow Bostonian Michael Siekman‘s skills shine through in life sciences side of the practice. The later two are based in Boston.