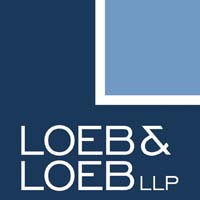 John T. Frankenheimer’s practice is centered in the entertainment and media industries, with emphasis on both institutional and talent clients. This includes advising on the acquisition, sale and restructuring of companies, including financing, valuation, securitization and due diligence issues, as well as representing companies, artists and executives in all aspects of the music industry, including all forms of talent contracts, distribution, licensing, technology-related issues, publishing, sub-publishing, touring and live events and production activities. He also represents writers, producers and directors in both film and television, as well as various technology and media companies.

With a practice divided between Los Angeles and New York, Loeb & Loeb LLP covers TV production, the music industry, Broadway plays, and has particular expertise in the branding side of talent management. Scott Edel co-heads the team from Los Angeles, a specialist in advising Hollywood production companies such as Showtime and Black Label Media as well as digital platforms. His fellow co-head Roger Arar is based in New York, focusing on film and TV development, finance, production, distribution, and talent. John Frankenheimer from Los Angeles chairs the firm’s music industry practice and represents both organizations as well as talent clients. Vice chair of the music industry practice Debbie White is based in New York and focuses her practice on representing music industry players as well as digital media and tech companies.