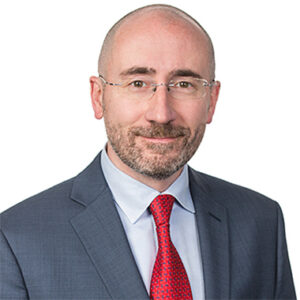 Erik Koons is a Partner in the Antitrust and Competition Practice of Baker Botts’ Washington, D.C. office. He has more than twenty years of experience representing many of the world’s leading companies in bet-the-company antitrust litigations involving the full gamut of competition related claims, including those alleging price fixing, market and customer allocation, monopolization, monopsonization, “sham” patent litigation, tying and bundling. Many of these litigations have involved massive, nationwide class action claims for both direct and indirect purchaser plaintiffs as well as suits brought by state and federal governments. Mr. Koons’ class action defense experience involves claims seeking in the hundreds of millions to over $10 billion in alleged damages.  Mr. Koons’ experience has been concentrated in the pharmaceutical, medical device, CPG/FMCG, technology, telecom, chemical, manufacturing, transportation and electronics industries.  Mr. Koons devotes a substantial amount of his practice representing companies in internal competition-related investigations and in connection with investigations launched by federal antitrust enforcement agencies and states attorneys general.  He regularly counsels corporations on competition-related business matters and designs and implements antitrust compliance programs for clients across the globe.

Mr. Koons was a member of the trial team that received dismissals of six of the seven price-fixing and monopolization charges for McWane, Inc. in an eight-week bench trial against the FTC. The dismissals marked the first time in nearly 20 years that the Commission ruled against itself following an in-house trial in front of the agency’s administrative law judge. The case earned the McWane trial team the award for “Behavioral Matter of the Year- Americas” by Global Competition Review.

Mr. Koons is a sought-after writer and speaker on a wide range of antitrust topics and has authored competition related articles and publications, including as co-author of the recent chapter of “GCR Know How” and co-editor of the ABA’s publication on Obtaining Discovery Abroad, 3rd ed.

Mr. Koons devotes a portion of his practice to pro bono matters involving those who might otherwise lack access to justice. For example, Mr. Koons mounted a constitutional challenge when his client was confined to solitary incarceration for three years as punishment for defending himself against a brutal assault by a prison gang that left the client in the hospital for an extended period. Mr. Koons tried the case before a federal jury in Syracuse, New York and obtained the only verdict of its kind awarding both compensatory and punitive damages to an incarcerated plaintiff seeking compensation against the state.  Mr. Koons has worked on dozens of other pro bono matters involving applications for DNA evidence review in connection to applications for actual innocence and criminal expungement work to rid individuals of the stigmas that often prevent them from obtaining gainful employment.

From 1999-2000, Mr. Koons was clerk to the Hon. Norman A. Mordue, United States District Court Judge for the Northern District of New York.

Baker Botts L.L.P.‘s  ‘wonderful, hard working‘ team is heavily involved in a variety of high-profile cartel investigations, working on behalf of major corporates in criminal and civil proceedings, as well as handling investigations, internal compliance, and broader policy issues, with team members regularly contributing to thought leadership and ongoing legal debate in key emerging areas such as labor market issues, Big Tech and intellectual properties. The criminal cartel practice is primarily led by John Taladay, a leading figure in the space with a strong record in securing acquittals and leniency agreements for major clients, notably securing a DPA for Taro Pharmaceuticals in its case against the DOJ. Maureen Ohlhausen co-heads the practice and takes the lead on civil antitrust investigations, regularly representing clients in price-fixing and filing investigations, with a standout representation in 2021 being her work for Facebook and Google in the FTC’s Special 6(b) investigation into prior acquisitions by Big Tech companies. Taylor Owings joined the firm from the DOJ in June 2021, and has notable expertise in the interface between intellectual property and antitrust issues, a growing area of focus in cartel investigations. Erik Koons is leading the firm’s representation of the National Association of Boards of Pharmacy in the Southern District of New York, against allegations of unfair competition, while Joseph Ostoyich is vastly experienced in monopolization litigation. Stacy Turner handles civil and criminal cartel investigations, with expertise in a range of cartel defense strategies. All lawyers mentioned are in Washington DC.