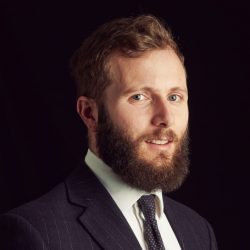 His practice focuses on international litigation and arbitration matters, including ICSID, LCIA, ICC, UNCITRAL and other investment-treaty and commercial arbitration. Lawrence also has experience of managing overseas litigation on behalf of clients.

Lawrence also has considerable experience advising clients on issues with an international law dimension, including complaints under the OECD Guidelines for Multinational Enterprises and advising on television broadcast licensing and regulatory arrangements in the EU and EEA post-Brexit.

As a Russian speaker, Lawrence frequently advises on matters with a Russia/CIS dimension.

Lawrence has advised on commercial litigation cases in the English Courts and has considerable experience of advising on media and defamation matters.

Lawrence graduated with a First in Modern and Medieval Languages (Russian and German) from Cambridge University. He spent a semester teaching English at the St Petersburg Classical High School and a semester as a student at Novosibirsk State University in Russia.