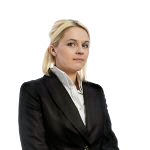 Lucie completed her first degree in Classics at Newnham College, University of Cambridge in 2005. Thereafter, she achieved ‘distinction’ level on her graduate diploma course and ‘very competent’ at BVC, scoring the top assessment mark in the area of Family law. During her legal studies, Lucie was twice selected as a prize winning scholar of the Inner Temple. Lucie joined St. Philips as a tenant in October 2009 following successful completion of her pupillage under the tutelage of Alistair MacDonald (now QC) in the area of public law children work. Lucie continues to develop a strong practice in this area, alongside all other aspects of family law (private law children, Finance and ToLATA) and the law relating to persons with diminished capacity (Court of Protection, Mental Health). Lucie made her first appearance in the Court of Appeal in December 2013, acting for a Local Authority in a case concerning allegations of historic inter-sibling sexual abuse between minors. She has acted as junior in a ten day finding of fact hearing at the RCJ. Lucie appears in the High Court and has run contested cases of up to five days. With an emphasison public law children, private law children and ancillary relief, Lucie has a pre-dominantly court-based practice but is able to advise on papers as required, particularly in the areas of Ancillary Relief and ToLATA. Whilst maintaining her interest in the academic development of family law, Lucie has a particular strength in building a rapport with clients in emotional circumstances. She has a strong belief in the right of every client to put their case at its highest and maintains a high standard in the force of her written and oral arguments.