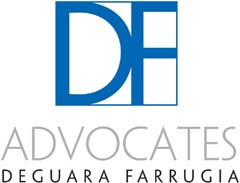 Marlon is a qualified lawyer and partner with DF Advocates

Marlon graduated as Bachelor of Laws in 2010, was awarded the Diploma of Notary Public in 2011 and graduated as Dor of Laws in 2013 after submitting a thesis entitled “Actions against Sister-Ships under Maltese Admiralty Law”, which thesis was later published by “Scholars’ Press”. Marlon joined DF Advocates in 2013 and was admitted to the bar in February 2014. Marlon has since advised an extensive portfolio of clients, local and international, from both the public and private sphere, including medium-to-large sized franchises, companies, joint ventures, ship owners and financiers. Marlon currently holds the office of Vice-Chairman of the Players and Coaches Complaints Board within the Malta Football Association which he has held since 2017.

Marlon is a member of the Malta Chamber of Advocates.