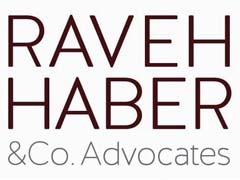 Adv. Gil Raveh, a founding partner of Raveh Haber & Co. (together with Adv. Miriam Haber), is one of Israel’s leading lawyers in the fields of taxation and investment funds, as recognised by many Israeli and international legal directories.

Gil possesses extensive experience in the fields of taxation, investment funds, international joint ventures and representation of high net-worth individuals in a broad range of matters within the taxation and finance arenas, accumulated over more than twenty five years of legal counseling. Moreover, Gil holds a unique specialisation in representing various types of Israeli institutions in their offshore real estate investments.

Gil specialises in the establishment and operation of a full range of investment funds, including some of Israel’s most prominent private equity fund and members of their senior management, representing institutional investors in their investments abroad and international gatekeepers and investments funds in their activities in Israel.

Gil’s specialization in international tax law, and especially in the taxation of partnerships, turned him into one of the most prominent attorneys representing Israeli clients in complex international real estate investments.

In addition, Gil represents a large number of private individuals, among them senior executives in the Israeli economy, as well as foreign nationals who are in Israel working for Israeli companies and high net worth families and individuals. He provides advice and assistance with regard to their employment contracts, with an emphasis on all relevant tax issues, compensation matters and pre-immigration planning family trusts and, cross-border inheritance.

After being admitted to the Israel Bar Association and the New York Bar Association, Gil worked as a tax associate in New York at Shearman & Sterling LLP and at Skadden, Arps, Slate, Meagher & Flom LLP.

When Gil returned to Israel in 2000, he served as a Tax and Funds partner in a number of leading Israeli firms prior to forming Raveh Haber & Co. in January 2013, together with Adv. Miriam Haber.

Gil is ranked as a leading attorney in his areas of practice by both Israeli and international legal ranking guides. The 2020 edition of Legal 500 ranks Gil as one of the leading lawyers in the field of private investment funds in the Israeli market (one of four lawyers, among them is Adv. Miriam Haber):

“Highly regarded by peers in the Israeli market, Raveh Haber & Co. is a boutique firm with expertise in investment fund formation and taxation. Gil Raveh and Miriam Haber are key figures in the practice group.”

Gil is also described by Legal 500 as ” has a wealth of experience advising investment funds, high-net-worth individuals and companies involved in joint ventures on a broad range of tax and finance matters, including acquisition and disposal transactions, the tax aspects of employment contracts, family trusts and cross-border assets.“

The 2020 edition of Chambers and Partners describes Gil as:

“available and very, very smart, and has a lot of experience”… “Gil Raveh is deemed by market commentators to be “a fantastic lawyer in fund formation.” Adept in cross-border work, clients describe him as “very experienced and professional.”

The 2020 edition of Who’s who Legal Global features Gil as one of the recommended lawyers in the private funds’ practice:

“Gil Raveh is a highly respected funds formation practitioner in Israel, with peers highlighting him as “an experienced and business-oriented practitioner”…Gil Raveh impresses peers with his knowledge of private funds regulations, to the point that they say he “should certainly be included on the list of leading practitioners”.

Member of the Israel Bar Association, 1995.

BA in Economics, The Hebrew University of Jerusalem (1994).