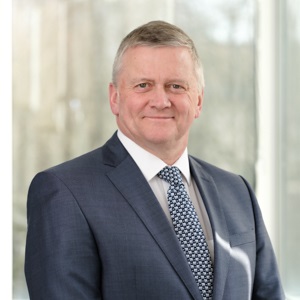 Michael Lavelle, Managing Partner, founded Lavelle Partners in 1987. He is a recognised leader in a wide range of commercial law matters with renowned expertise in relation to mergers and acquisitions, corporate restructuring, insolvency, commercial litigation, shareholder disputes and partnership disputes.

He has a strategic overview of the legal market in Ireland and is the go-to person for numerous lending institutions and providing high level strategic advice on commercial issues. He is an experienced litigator and was lead adviser in many of the seminal Irish commercial cases and is an expert in his field.

He is also a commercial law expert with a long history of working in contentious and non-contentious matters. He has extensive experience in high value commercial transactions and shareholder issues.

Michael advises on company takeovers and mergers and has been involved in a significant number of company sales and purchases. He also advises on general commercial agreements including agency and distribution agreements, shareholder agreements, option and other associated agreements as well as partnership disputes in professional services firms including law firms, accountants, architects, doctors’ practices and others.

Listen to Michael’s interview with Carol Coleman on RTE Radio 1’s This Week on post-pandemic insolvency.

Read Michael’s comments in The Sunday Business Post on the zombie economy and the possible fallout for Irish business when government subsidies cease.