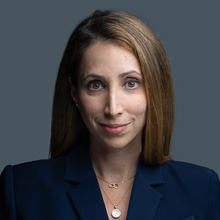 Noradèle Radjai is a partner in the international arbitration team, specialising in commercial and investment arbitration in the energy (in particular oil and gas), telecommunications and construction sectors. She also advises clients from the Middle East or in relation to contracts or projects in the Middle East.

Ms Radjai has acted as counsel, advocate and arbitrator in over 50 international arbitration proceedings, both ad hoc and institutional (under the ICC, LCIA, SCC, ICSID, AAA/ICDR, UNCITRAL and Swiss Rules), including disputes arising from share sales and acquisitions, joint ventures, and large projects, governed by a variety of procedural and substantive laws including Swiss, English, Lebanese, Kuwaiti, French, Russian, Cypriot, New York and Californian.

Ms Radjai is highly recognised by the leading legal directories. She was ranked as one of the top 5 arbitration partners globally under the age of 45 in Who’s Who Legal: Future Leaders – Arbitration 2017 and is currently ranked in Who’s Who Legal’s global ranking for all arbitration practitioners. She is also included by Chambers Global and Europe in their Europe-wide and Switzerland rankings of leading arbitration counsel.

Prior to joining LALIVE, Ms Radjai worked in the international arbitration group of Skadden, Arps, Slate, Meagher & Flom LLP in London, and with Simmons & Simmons in London.

Noradèle Radjai is a Solicitor-Advocate of the Senior Courts of England and Wales. She holds a Diploma in Law, with distinction, from the College of Law, London, and an LL.B., with honours, from King’s College London (1999).