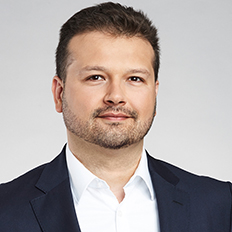 Partner, co-head of the M&A team.

He specialises in mergers and acquisitions, including the sale and acquisition
of companies and enterprises, as well as their post-transactional integration (including different management incentives, retention and employee stock option plans) and restructuring. He has been involved in numerous private M&A transactions, advising private equity funds, private owners and investors, and various other Polish and foreign businesses and corporations.

He also advises on acquisition and take-over processes with respect to distressed assets and companies, as well as restructuring and insolvency processes with transactional elements.

Jakub is experienced in capital markets, including take-overs of public companies, statutory tender offers for exceeding certain thresholds of shareholding, as well as in squeeze-out and delisting processes, including with respect to obtaining regulatory approvals connected with such matters.

A graduate of the Faculty of Law and Administration at the University of Warsaw.

WKB Wiercinski, Kwiecinski, Baehr is instructed in complex M&A deals that often have a cross-border dimension. The team is able to draw on the expertise of practitioners in ancillary areas on a regular basis, such as finance, competition, labour law, tax and IP. The ‘very responsive and flexible‘ Jakub Jedrzejak is an expert in cross-border M&A. He jointly leads the department with distressed M&A and restructuring specialist Andrzej Wierciński, as well as company law and corporate governance expert Anna Wojciechowska. Ben Davey, who is qualified in Australia, is a name to note for cross-border investment deals. Counsel Krzysztof Wawrzyniak is increasingly making a name for himself in the energy space.

WKB Wiercinski, Kwiecinski, Baehr‘s team acts for a strong roster of institutional investors, which it advises on domestic and cross-border transactions across a wide variety of sectors. The group is situated in the corporate department, under the leadership of Jakub Jędrzejak, with Ben Davey taking the lead on international private equity deals. Managing associate Tomasz Maślak is increasingly known for providing support on buy- and sell-side deals.